Ellen Lloyd - AncientPages.com - This is the story of how one man discovered a large underground village that was estimated to be 70-million-year-old.

He presented his findings to the scientific community, but none of the experts were interested in examining what could have been one of the greatest archaeological discoveries ever. 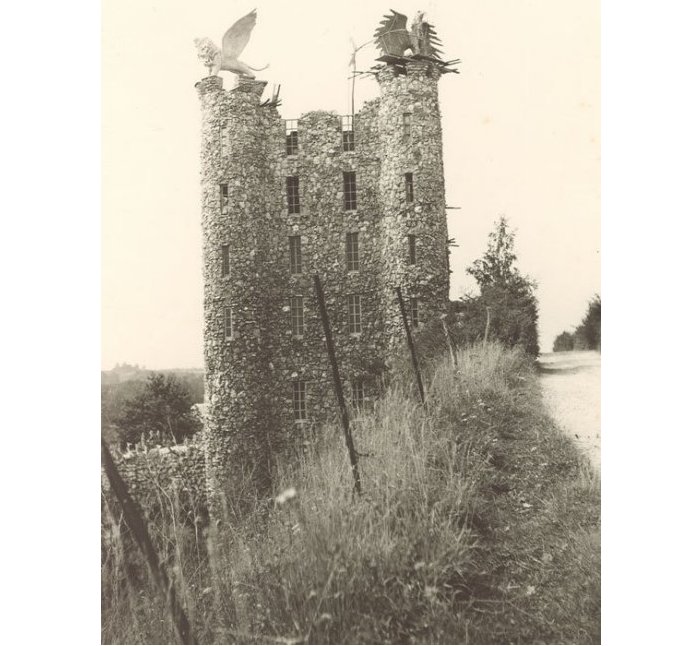 The magnificent tower of Eben-Ezer in Belgium.

Today, it’s too late because the place does no longer exist.

Some of these mysterious subterranean worlds are famous and examined by archaeologists. Others are virtually unheard of and can never be investigated because they were destroyed.

One intriguing place is the fascinating underground village of Thébah in Belgium. It is said to be 70- million-year-old!

The discovery of the underground village took place when Robert Garcet (1912 –2001) decided to build a fantastic tower in the village of Eben-Emael, in the province of Henegouwen, Belgium.

Garcet was a true artist who was very religious, fascinated with the Bible and ancient civilizations his magnificent tower reflects his interests.

It took Garcet 15 years to finish the tower of Eben-Ezer and today it serves as a museum, dedicated to Garcet's art and archaeological finds.

The Garcet’s tower has seven levels, five levels above ground, and two levels underground. The tower itself is of a square of 12 meters (40 feet) on each side, held up by four towers on each corner. Garcet deliberately designed the tower so its dimensions would correspond to ancient systems of measurement. Each measurement in the tower is symbolic. 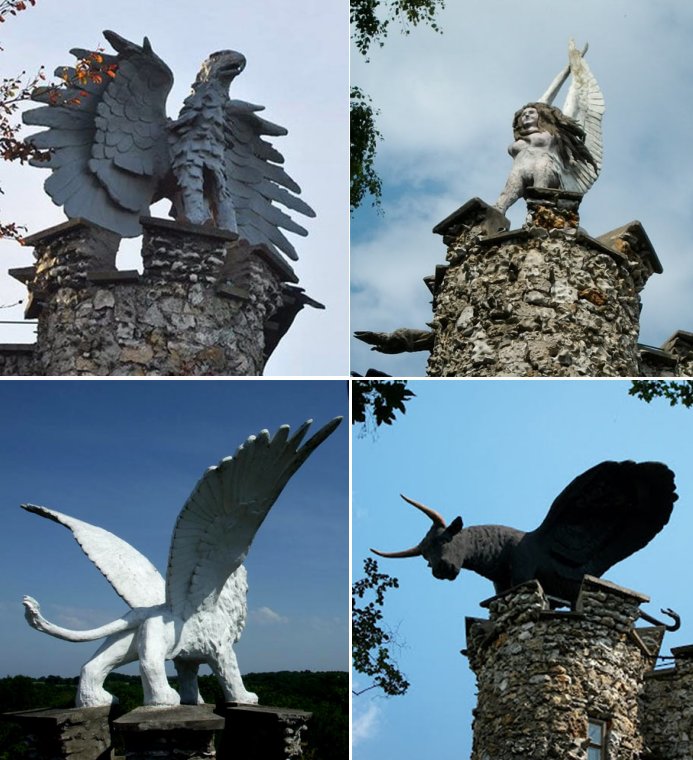 Four Biblical symbols from the Book of Revelation are visible on top of the tower. Image credit: Soul Guidance

Built of flint, the Eben-Ezer is and a representation of mankind as described in the Book of Revelation. On the top of the tower are four giant biblical creatures, the eagle, the ox, the lion and Man. The tower’s interior is full of Garcet’s biblical, archaeological, paleontological and geological art.

Garcet was heavily into Biblical symbolism, and that shows throughout his entire tower.

A 70-Million-Year-Old Underground Village Hidden Beneath The Tower

During the construction of the building, Garcet said he discovered over a hundred “new” fossilized creatures and a 70-million-year-old village in the labyrinth of tunnels under the tower.

There are many underground tunnels in Belgium and some of them are so long nobody has ever found the end of them. 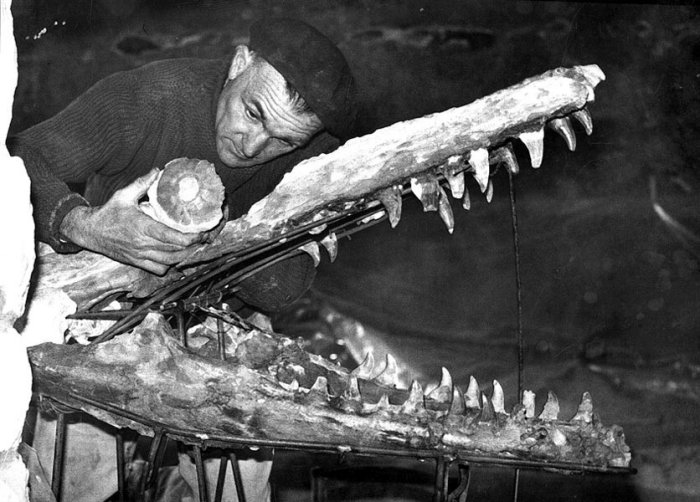 The skull of a Mosasaurus discovered by Garcet. Image credit: Soul Guidance

When he explored the underground flint mines and tunnels in the neighborhood, Garcet found stone toys and figurines made from flint and other material. 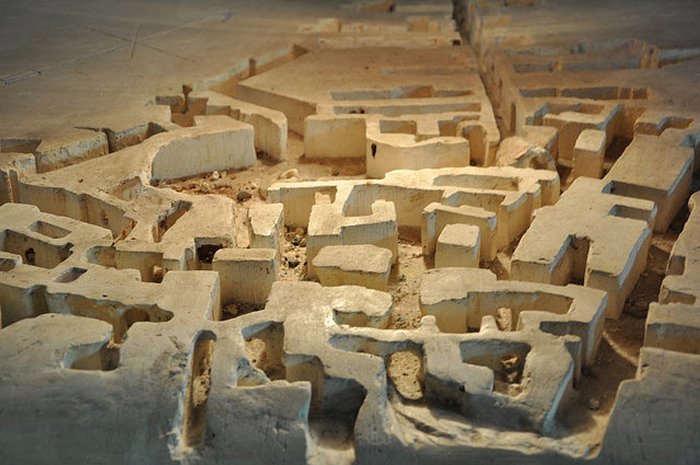 Garcet made a scale model of the underground village. Image credit: Soul Guidance

Some looked like stone dolls, made from rounded flat stones with engravings. They are all very primitive looking and are unlike what conventional archaeologists are used to.

Scientists Showed No Interest In The Ancient Underground Village

Garcet examined the underground village and discovered straight walls, tables, benches, and ornamental decorations incised on some of the walls. It was just like an ordinary village with streets, only this one was underground. 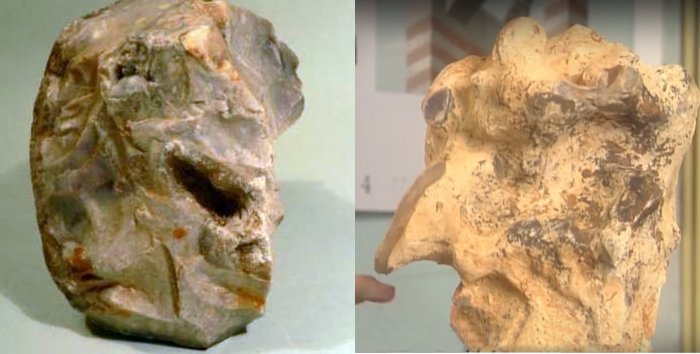 Some of flints Garcet discovered had the shape of a face. Image credit Soul Guidance

On top of the village are now three layers of ocean deposits, showing that Belgium has been covered three times by the ocean. This would mean that the underground village existed 70-million years ago. If Garcet’s was right, it’s an extremely controversial archaeological discovery. 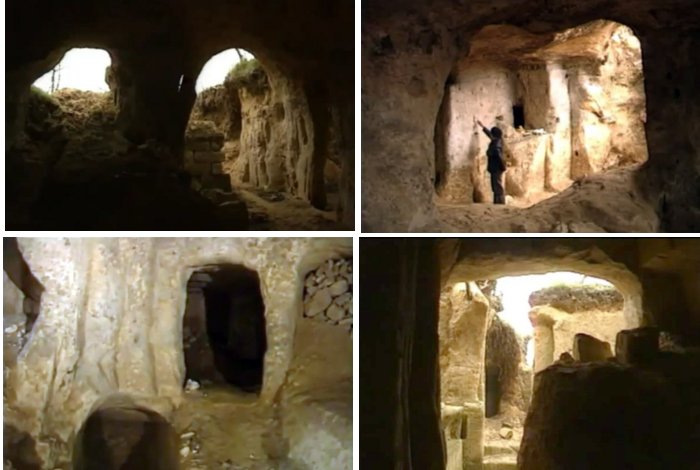 The following are pictures from a video documentary and book by Markus May, called Die Steine der Apokalypse, Robert Garcet und die Legende vom Feuerstein. What you can see in those pictures are small portions that remained after the flint company destroyed the village. Image credit: Soul Guidance

Garcet was eager to learn more about the underground village and he invited Belgium archaeologists to examine the place, but none of them showed up. 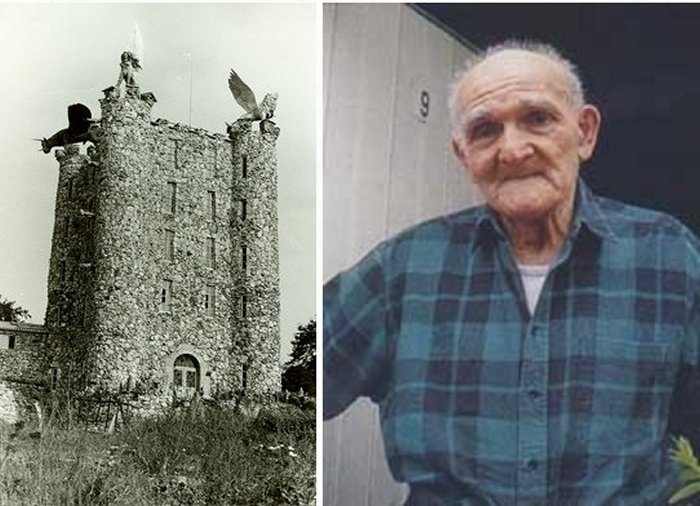 Garcet also unearthed mosasaur fossils from upper Maastrichtian strata in the Eben Emael area. He presented his findings to scientists, but they were uninterested in his discoveries.

Perhaps in more modern times, scientists would be interested in studying the remarkable ancient underground village in Belgium, but it’s too late.

The village was destroyed by a mining explosion before it could be studied.