AncientPages.com - On March 18 (or 19), 1314, Jacques de Molay, last grandmaster of the Knights Templars, an order of knighthood founded during the Crusades,  was burned at the stake.

Jacques de Molay, born in 1243, failed to exercise effective leadership when the suppression of the order by King Philip IV the Fair of France, and Pope Clement V. 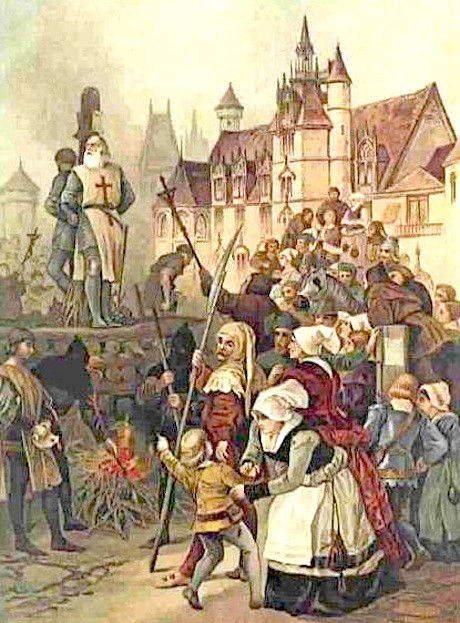 Summoned to France (1306 or 1307) by Pope Clement V to discuss a new crusade, Molay asked the pope to investigate certain spurious accusations of blasphemy and sodomy that had recently been made against his order.

On October 13, 1307, all the Templars in France, including Molay, were arrested and interrogated by the command of Philip IV, who was intent on crushing the order and seizing its wealth.

On October 24, 1307, Molay, probably under torture, confessed that some of the charges brought against the order were true.

However, he rejected a charge of sodomy.

He wrote to Templars throughout France, enjoining confession. Still, when the pope sent his own delegates to conduct the inquiries, Molay and many of his subjects retracted their statements, saying they had been exacted by torture.

In November 1309 and in March 1310, Molay appealed for a personal judgment by the pope.

But Clement decided to suppress the order (March 1312); and on March 18 or 19, 1314, a commission of three cardinals condemned Molay and other dignitaries of the order to perpetual imprisonment.

On hearing this sentence, Molay again retracted his confession, and as a final punishment, he was burned as a relapsed heretic by Philip IV’s officers the same afternoon.

But the question many still ask is : were the Knights Templar guilty or Innocent of the crimes laid against them?