A. Sutherland - AncientPages.com - In Africa, there are many fascinating, little explored ancient places that are shrouded in mystery. On this beautiful continent, we find traces of long-gone powerful ancient kingdoms, prehistoric structures raised for unknown reasons, enigmatic ancient artifacts and much more. 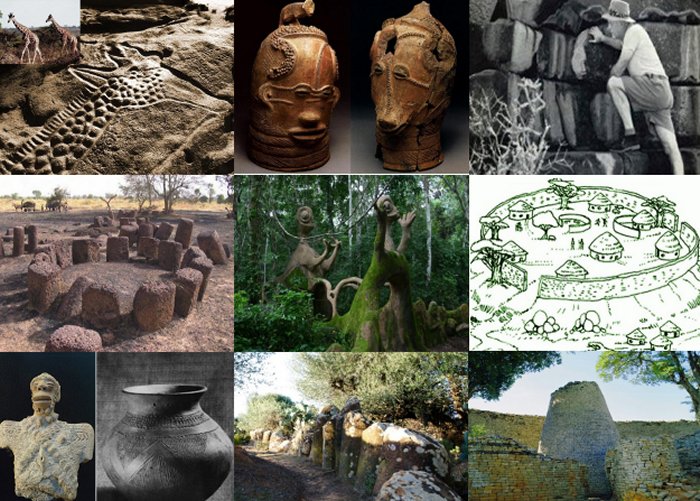 In this top list, we present 10 great ancient mysteries of Africa. 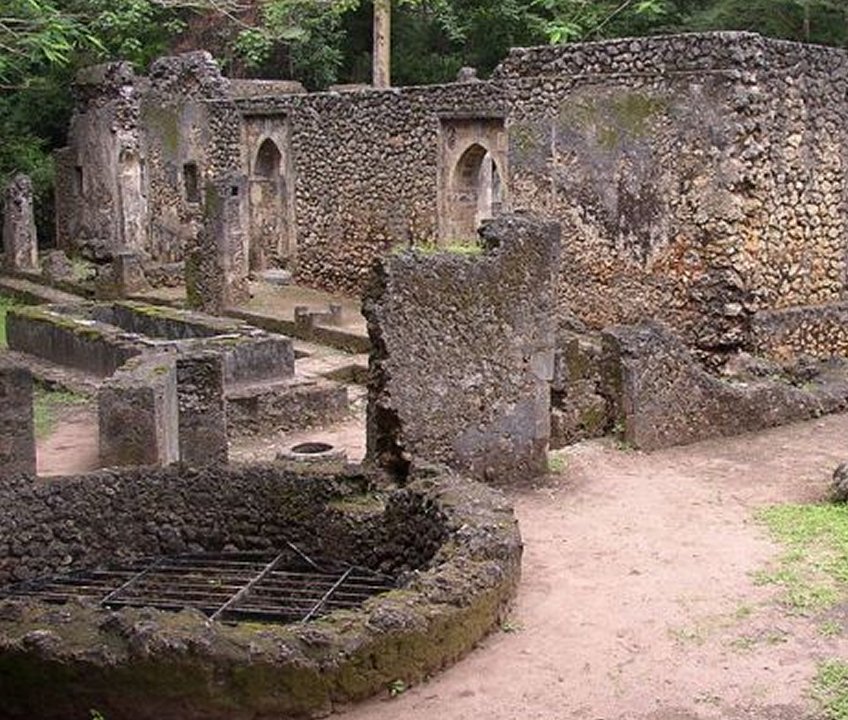 The mysterious abandoned city of Gedi in Kenya is surrounded by dense forests. Wild stories had been circulating about this lost city, which was believed to be the work of Phoenicians or Egyptians stranded on the African coast. Gedi’s beautiful ruins are confusing and eerie, especially in the late afternoon. Gedi has a sinister reputation and local people – who have heard a number of ghost stories and tales of inexplicable happenings – have always been uneasy about it.

This large, thirteenth- to seventeenth-century Swahili town was apparently unknown to the Portuguese, despite the fact that they had a strong presence only 15 km away from Gedi for nearly a hundred years (!), during a time when Gedi is judged to have been at the peak of its prosperity.
Gedi is not mentioned in any Arab or Portuguese chronicles of that period but according to local tradition, the ruins are protected by the spirits of its priests, the ‘Old Ones’ who supposedly curse anyone who harms the site or removes anything. Read more 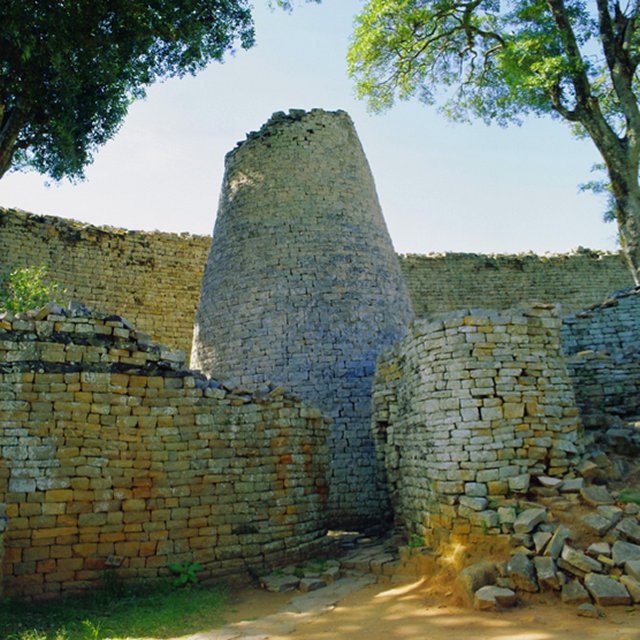 The ruins extending over approximately 385,000 square miles, are located in Zimbabwe, on the high plateau of southern Africa. At the site, there are remains of about five hundred perplexing structures.

Most of them are of conical shape but actually, it is not their shape that makes them so bizarre.

The lack of doors and windows and other openings made them useless for humans. The conical towers are thirty-three feet thick and some of the elliptical walls are three stories tall.

These strange buildings were built of rock, split into separate blocks and put together by some unknown method without using mortar. Read more 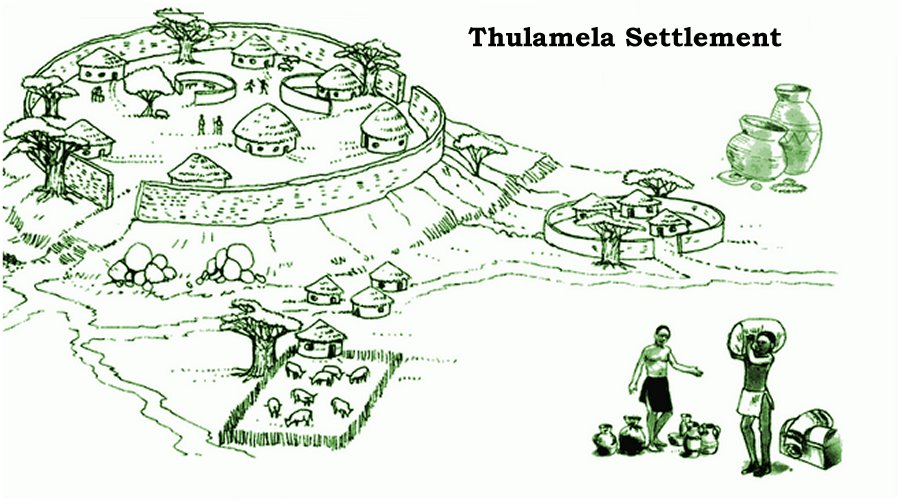 Thulamela is an intriguing ancient kingdom created by advanced ancient Shona people whose origin remains unknown. Based on archaeological excavations conducted in the area of the hilltop at Thulamela, people of Thulamela probably, came from Zimbabwe.

The settlement has many visible traces of the culture of Mapungubwe and Great Zimbabwe. Thulamela thrived between 1350 and 1650 AD. Its people employed sophisticated mining skills, and succeeded in converting iron ore into carbon steel for use in tools and weapons, and traded along the Swahili Coast.

The ruins of the ancient stone city of Thulamela were uncovered less than a decade ago in the Kruger National Park of South Africa’s northern provinces. 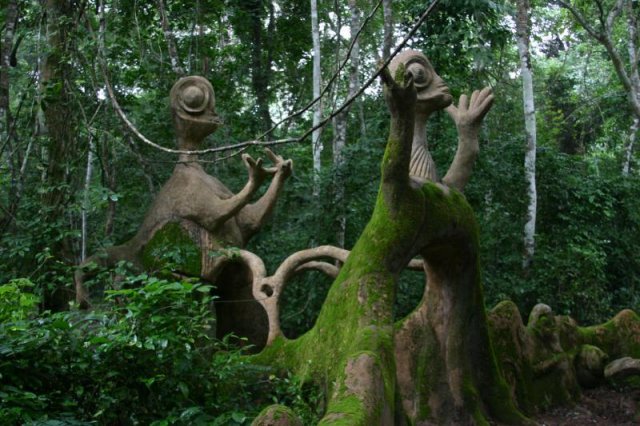 Oshun shares many similarities with the Egyptian goddess Isis. The goddess Oshun, was not only the goddess of beauty and love. She brought also the teaching of divinations, mysticism, agriculture and culture to humans. Read more

5. Obscure Past Of Mzoura Stones - Morocco 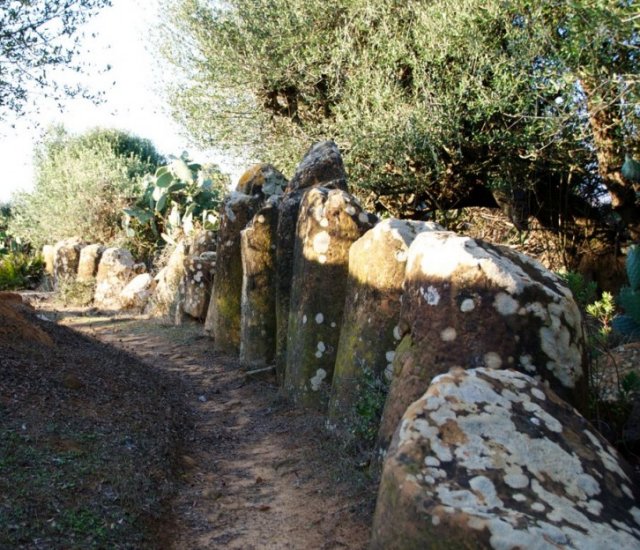 The so called “Cromlech de Mzoura” or “circle of Larache” is one of the most famous and largest megalithic landmark of the north-west of Morocco, North Africa.

“Mzoura” (in Arabic means “The Holy Place”) can be found about 15 km south of the harbor of Asilah not far from Tangier. The elliptical-shaped tumulus at Mzora has 55 meters (177 feet) in diameter and is surrounded by 167 stone monoliths, of which the tallest, is about 5m (3.2 feet) high.

The locals say that it has approximately 7 meter long stone “root” below the surface. The megaliths were hammered and polished by hand. Their arrangement forms a perfect elliptic structure.

What was the name of this holy place long before the Arabs came? The holy place of Mzoura is associated with a number of myths, very ancient legends and uncovered mysteries which no one has ever tried to solve because the majority of these stories. are in fact, related to giants, a subject which is still neglected by modern historians. Read more 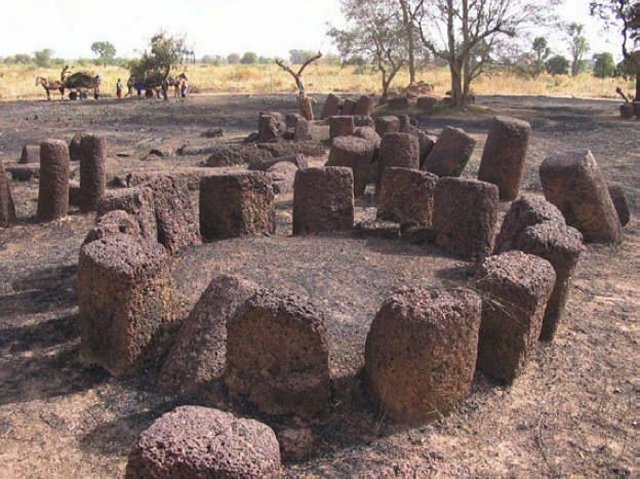 Most people have heard of Stonehenge in UK, but far from all are familiar with a large concentration of stones that are sometimes referred to as the African Stonehenge.

The stone circles and other megaliths found in Senegal and Gambia are divided into four large sites.

The four large groups of stone circles represent an astonishing concentration of over 1,000 monuments in a band 100 km wide along some 350 km of the River Gambia. It is a remarkable little known ancient site.

The four sites cover 93 stone circles and numerous burial mounds, some of which were recently excavated to reveal material that suggests dates between 3rd century BC and 16th century AD. Together the stone circles of laterite pillars and their associated burial mounds present a vast sacred landscape created over more than 1,500 years. Read more

7. The Lost Ancient City In The Kalahari Desert 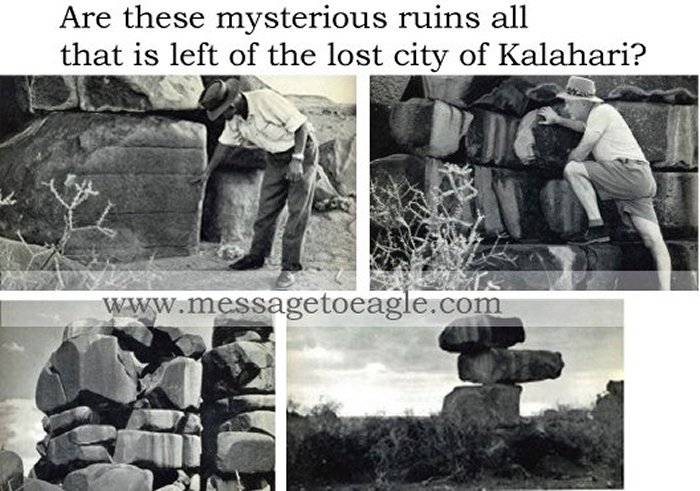 The Kalahari Desert is a large semi-arid sandy savannah in southern Africa extending 900,000 square kilometers, covering much of Botswana and parts of Namibia and South Africa.

It is believed that the ruins of ancient cities lie beneath the sands of the Kalahari Desert and they must be very old.

According to the Bushmen and Hottentots (now called Khoi Khoi) living in this region, once upon a time, there was city here that was not built by them, but by an ancient civilization.

The building of the city had never been completed, and it was still possible to unearth tools from the debris. Mysterious ruins were apparently to be found in different parts of the Kalahari, even north near the Caprivi Strip and Ovamboland. Some explorers have discovered ruins that could be remains of the lost city of Kalahari. Read  more

8. Ancient Intriguing Sao People - One Of The Oldest Civilizations Of Central Africa 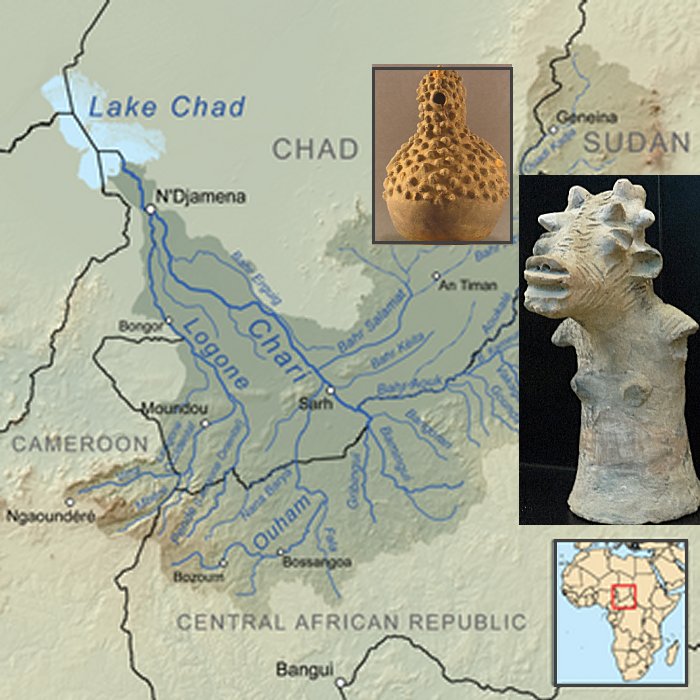 The Sao people – means “the men from another time” are an intriguing and one of the oldest civilizations of Central Africa.

An ancient civilization was developed by the Sao people in the region of Southeast of Lake Chad, located in the far west of Chad and the northeast of Nigeria.

The Sao civilization is identified by its use of stone and bone implements and the construction of walled cities.

This civilization flourished in Middle Africa from ca. the sixth century BC to as late as the sixteenth century AD. The Sao lived by the Chari River south of Lake Chad in territory that later became part of Cameroon and Chad.

They are the earliest people to have left clear traces of their presence in the territory of modern Cameroon. Read more 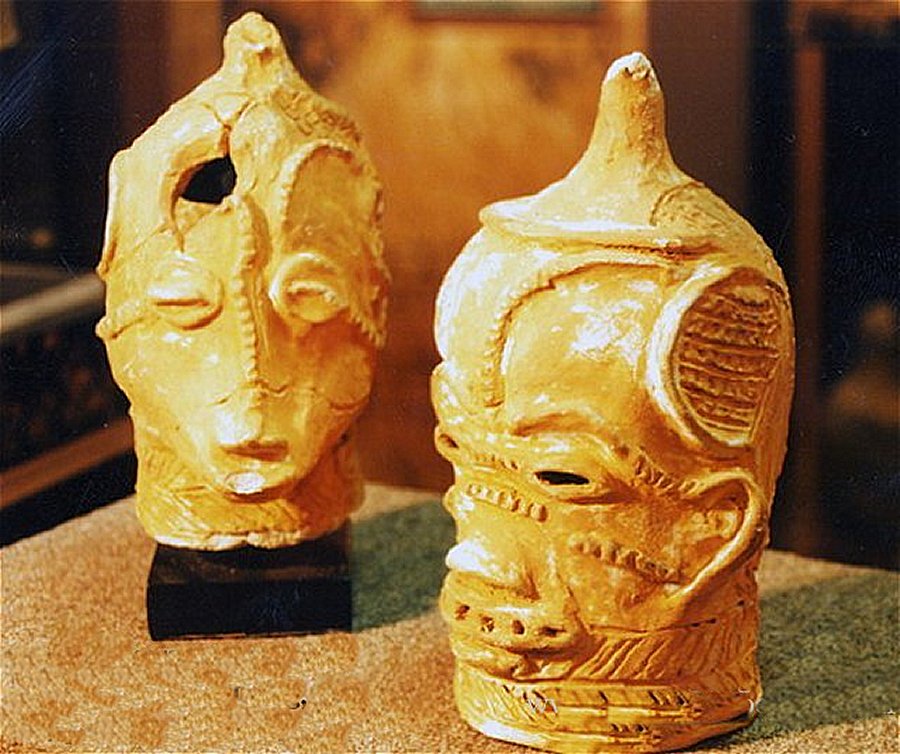 The heads have scarification marks (scars intentionally created to form patterns on the flesh) on the forehead, temples, and between the eyes. Six of the heads are human and the seventh is some kind of animal replica.

He returned to the area a few years later and, over a period of several years, collected the pieces of seven heads. This internationally important discovery is known as the Lydenburg Heads.

The artifacts are one of the earliest known forms of African sculpture in Southern Africa. There are seven hollow terracotta sculptures which are named after the site at which they were discovered in the late 1950s.

Excavations suggest that the heads may have been burned and deliberately buried, rather than just discarded or abandoned. Read more

10. Gigantic Engravings Of A Giraffe Created Long Before Egypt As We Know It Existed

Amazing carvings that are 20 feet in height and consist of two life-size giraffes were meticulously carved into the Dabous Rock. One large male, which is more than 18 feet tall, was carved in front of a smaller female. Both were engraved side by side on the sandstone affected by time and weather.

Who were these prehistoric creators of these gigantic engravings? Read more

Most likely there are still many undiscovered artifacts and ruins in Africa, a continent that is still greatly unexplored by archaeologists.