A. Sutherland - AncientPages.com - Hinduism is rich in symbolism. There are a variety of ancient sacred symbols that represents philosophies, teachings, and gods and goddesses. Many of the Indian symbols are related to the secrets of the cosmos and mysteries of time such as the flow of past, present, and future events.

In this top list, we examine some of the most sacred and significant ancient Indian symbols and take a look at the meaning behind them. 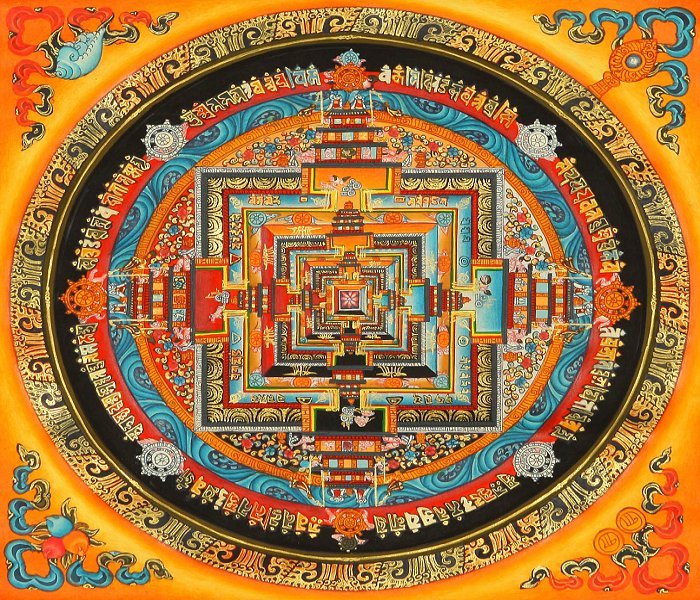 Kalachakra ('Wheel of Time' or 'Circle of Time') is the universal symbol of Buddhism, representing the teaching of the Buddha and symbolizes the perfect creation. Eight spokes of the Kalachakra wheel mark the directions in time and each one is ruled by a deity and having a unique quality.

This powerful symbol (also known as the Kalachakra Sand Mandala) is a powerful symbol imparts healing and peace to all beings on this planet and to the planet itself. We can see complex, beautiful patterns, their perfection, and symbols rich in meaning. It is also a 2D representation of the five-story palace of the Kalachakra deity, in which a totally of 722 deities reside.
Kala ('time') is not linear but the flow of all events (past, present, future). Chakra ('wheel') is with no beginning and no end.

2. AUM (OM) - Is The Most Universal Of Hindu Symbols 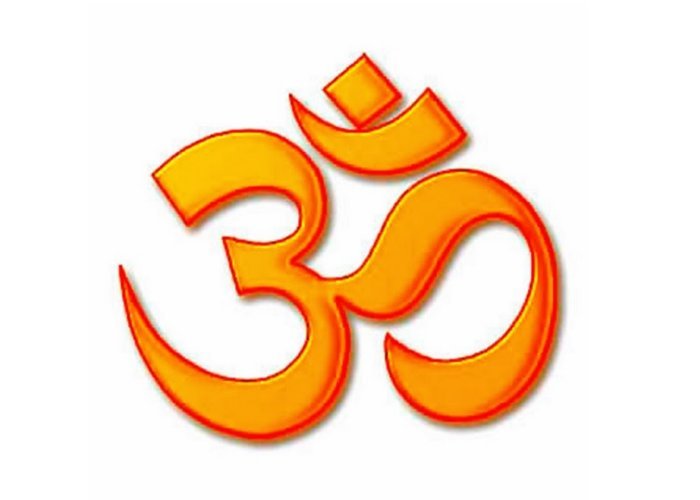 AUM (or OM) symbolizes the Universe and the ultimate reality. It is the most important Hindu symbol. At the dawn of creation, from emptiness first emerged a syllable consisting of three letters - A-U-M (often written as OM).
AUM is considered an original (primal) sound that rang out in the created universe.

It is the root mantra. Mantra is a word of great power, usually, a combination of Sanskrit syllables used as an invocation, prayer, recited loudly and repeatedly. MA - means 'the soul, the mind' and TRA - means: 'protect, lead'. Among several mantras, there is one, most important: mantra OM.
It is considered AUM (OM) represents the three aspects of God: the Brahma (A), the Vishnu (U), and the Shiva (M).

3. Ganesha - Manifests The Powers Held Within Every Human Being 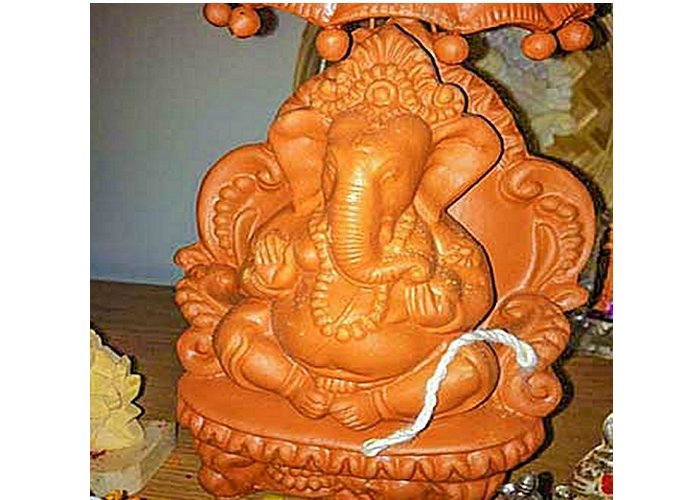 Ganesha - the son of Lord Shiva and Parvati - means many symbols. Each symbol associated with the elephant-headed Hindu god is a reminder to manifest the powers held within every human being. Ganesha is the Lord of Obstacles and Ruler of Dharma, a patron of scholars and science tutor books, letters, scribes, and schools and slayer of demons and negative forces.

He guides our karmas through creating and removing obstacles from our path. We seek his permission and blessings in every duty and activity we are involved in; Ganesha ensures success in various endeavors. Read more about Ganesha

4. Banyan Tree (Vata) - One Of The Most Worshiped Trees In India 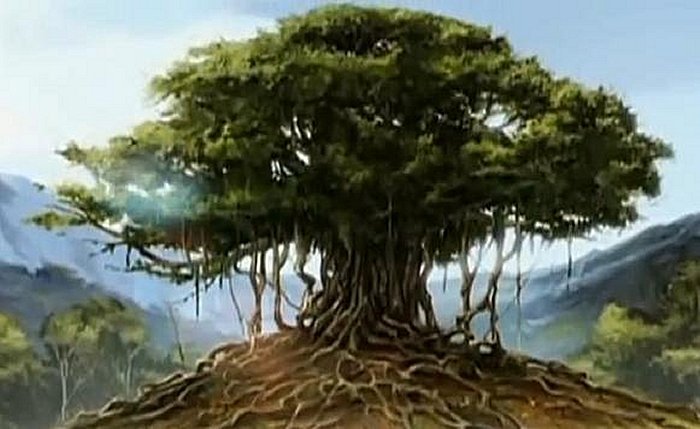 Vata (or banyan tree), traditionally planted in front of temples, symbolizes Hinduism, longevity, fertility, and represents the divine creator, Brahma, and is one of the most worshiped trees in India. It symbolizes Trimurti - Lord Vishnu is believed to be the bark, Lord Brahma, the roots, and Lord Shiva, the branches.
It has the ability to survive and grow from many roots in all directions and for many centuries; it spreads vast shadow and it is said that Shiva ("Silent Sage ") and the Rishis sat under its shade to seek enlightenment.
Vata symbolizes the personality of benevolent rulers or those who feed and look after their families.

Its stems are the home of gods and spirits. The banyan tree, mentioned in scriptures as a Tree of Immortality and the one, which nourished mankind with its 'milk' before the advent of grain and other food - is never cut.

Sri Yantra, (or Sri Chakra) is a beautiful and complex sacred geometry used for worship, devotion, and meditation for thousands of years. Its origin seems unknown.
It is characterized by nine interlocking triangles that radiate from a central point. The four upright triangles represent the masculine side (or Shiva) and the five inverted triangles represent the feminine, (or Shakti) - Divine Mother. The nine interlocking triangles form forty-three small triangles each housing a presiding deity associated with particular aspects of existence.

In its 3D form, Sri Yantra represents Mount Meru, the cosmic mountain at the center of the universe, and is also believed to be the unity of everything in the cosmos. Otherwise, it is regarded as a place of the spiritual journey. It is a representation of the cosmos at the macrocosmic level and of the human body at the microcosmic level (each of the circuits corresponds to a chakra of the body).

6. Shiva Nataraja - Beautiful Avatar Of The King Of Dance 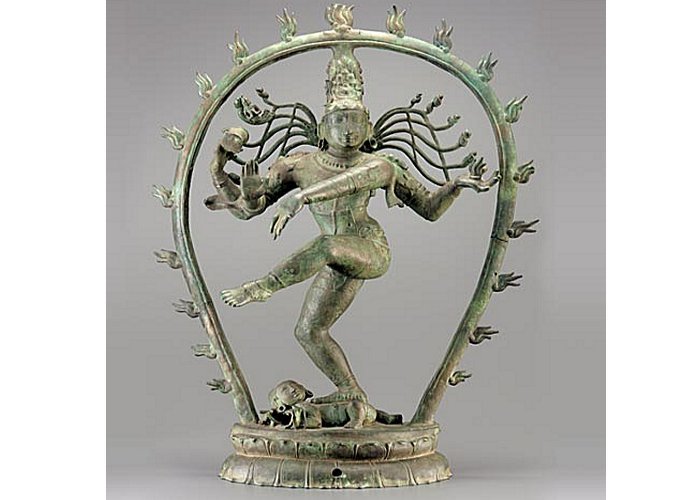 Nataraja is a popular depiction of the Hindu god Shiva in a dancing pose. This avatar is a message that ignorance can only be overcome by knowledge, music, and dance. Commonly known as an angry god of destruction, Lord Shiva is also known as Nataraja, the 'Lord of Dancers'. His 'Dance of Bliss' on an aureole of flames, means creation and destruction of the cosmos in an eternal cycle of regeneration (never-ending cycle of time).
"Nataraja"(in Sanskrit: from 'Nata' ) means dance and 'Raja' means King. Shiva as Nataraja ("King of Dance "). This depiction of Shiva as creator, preserver, and destroyer of the universe, dates to the Chola Dynasty's bronze statues, (ca. 907-1279).

Shiva balances on one leg upon Apasmara, a demon-dwarf, symbol of darkness and ignorance. His other raised leg represents liberation from those evils. Shiva's upper right-hand holds a 'dumroo' double-sided drum that symbolizes creation and makes the first sounds of creation; with his lower right hand, he makes the gesture ("abhayamudra ") that dispels fear.
His upper left-hand holds 'agni', the fire that will destroy the universe, (the cosmic destruction). His lower left points downward to his raised foot, while his lower right-hand makes a gesture of protection.

7. Swastika - One Of The Most Ancient Symbols In Human History 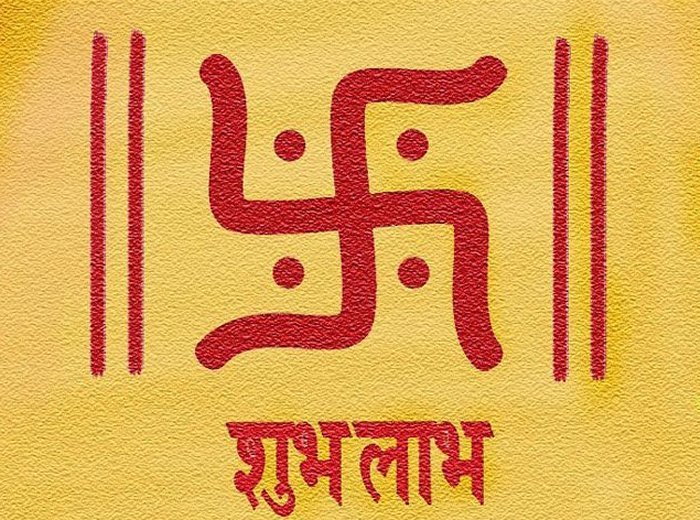 The swastika (in Sanskrit, 'being happy') is one of the most ancient symbols and the second sacred symbol in Hinduism has a great religious significance for the Hindu people. Its four directions symbolize the four points of the compass. It is related to life, peace, and good luck but also represents the revolving sun and fire.

It dates back some 6,000 years to rock and cave paintings and originated in India and was first mentioned in the Vedas. Present in the ancient Hindu world as the variant of the cross, the Swastika represents honesty, purity, truth, and stability.
In both Hinduism and Jainism, the Swastika is used to mark the opening pages of account books, doors, and thresholds. 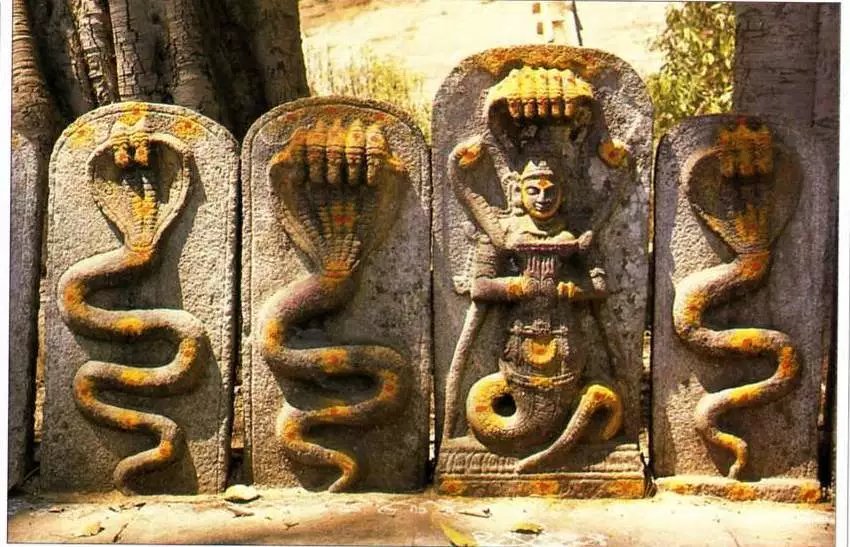 Snake or Naga (Sanskrit and Pali word for a deity in the form of a very large snake) symbolizes 'kundalini power' and cosmic energy looped and sleeping within a man. Since ancient times, Naga represented the cult of serpent worshipers, the ruler of underground or 'patal'. The symbolic significance of the snake is believed to be great. Both the masculine 'Naga' and the feminine 'Nagin' are venerated widely. In special naga shrines, snakes are kept, fed, and worshiped regularly in the same way as other deities.

Naga or Snake worship envelops the life and time of a Hindu. It primarily represents rebirth, death, and mortality, by casting off its skin it symbolically means "rebirth". Snakes are a symbol of original energy and healing. In many Hindu societies, serpents are proclaimed as guardians of the house, and they say: When a snake enters your life, a time of creativity and wisdom begins. Read more about the Naga

9. Lotus  Flower - The National And The Holiest Flower Of India 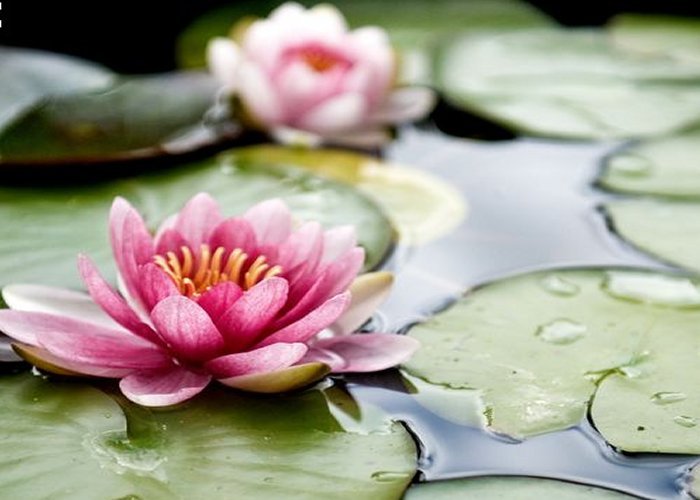 The Lotus flower is a symbol of culture and etiquette and the national and the holiest flower in India. It symbolizes creation, the perfection of beauty is associated with Vishnu, Brahma, Lakshmi, and the chakras. Its blossom is a promise of purity and non-attachment. Even if rooted in mud, the beautiful lotus remains clean and continues to float on the water. This aspect of the lotus dictates how humans ought to live in this world - work incessantly but be not attached to the work and to the surroundings.

It also reveals: "This world is not our habitation but one of many stages, we are passing through."
Brahma, the creator god in the Trimurti of Hinduism, always meditates on the lotus, and many Hindu deities like Vishnu, Ganesha and Parvati are holding the lotus in their hands. This symbol is depicted on houses, vehicles, and buildings of India. 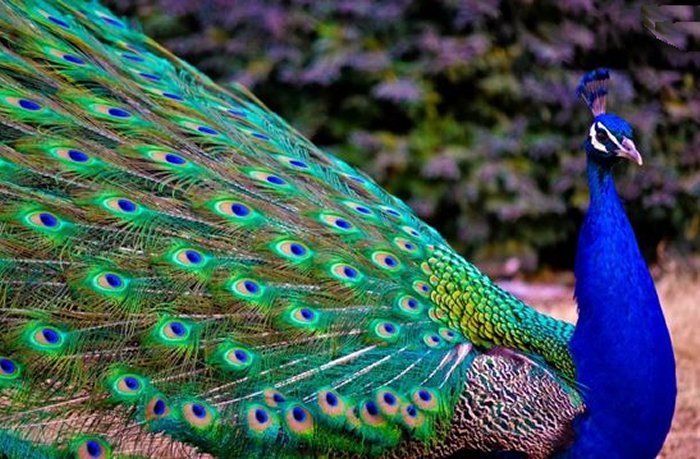 Peacock (in Sanskrit: 'mayura') is the national bird of India; the symbol of the cycle of time in Hindu scripts. His feathers bring good luck and prosperity into the house and keep it free from flies; his cry warns of approaching danger.
It is believed that this sacred bird was created from one of the feathers of Garuda (a legendary bird in Hindu mythology and a carrier of Lord Vishnu).

The peacock brings joy and harmony to our minds and is highly valued as a protector of our psychic health. God Indra, the god of thunder and rain and a great warrior, a symbol of courage and strength, transformed himself into a peacock and Lord Krishna, the eighth avatar, or incarnation, of the god Vishnu, was often depicted with a peacock feather on his crown. 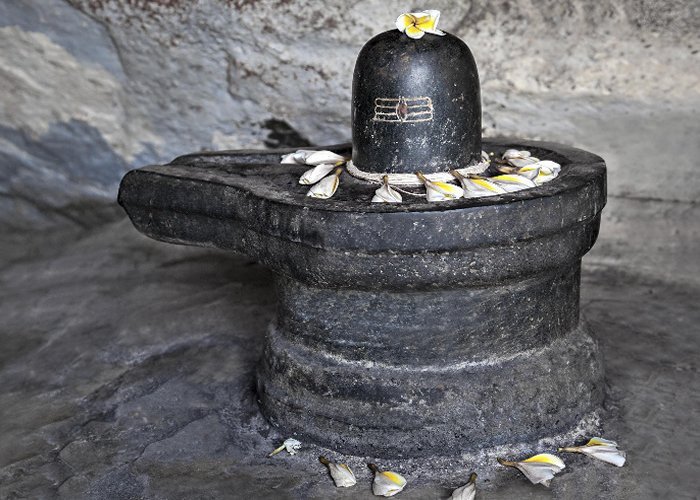 Shiva Linga is a symbol of Lord Shiva and his potential and an ancient mark that points to an inference. It is a mark that reminds of the Omnipotent Lord, which is formless.
The popular belief is that it represents the phallus, the emblem of the generative power in nature. It also symbolizes the cosmic egg and the creation which is effected by the male and female powers of Nature. Shiva Linga also means Truth, Knowledge and Infinity. Over 1,000 astonishing Shiva Lingas can be seen in the middle of the Shalmala River.

B. Bryant, The Wheel of Time Sand Mandala: Visual Scripture of Tibetan Buddhism

A. Parthasarathy, The Symbolism of Hindu Gods and Rituals