A. Sutherland - AncientPages.com - Known under a number of different names, Kukulkan, the Feathered Serpent was one of the most important gods in Mesoamerica. 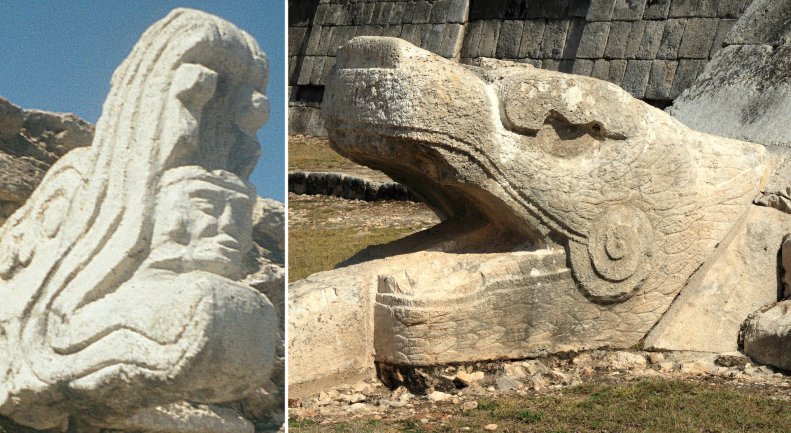 Left: Ballcourt marker from the Postclassic site of Mixco Viejo in Guatemala. This sculpture depicts Kukulkan, jaws agape, with the head of a human warrior emerging from his maw. Iamge credit: Simon Burchell  - CC BY-SA 3.0; Right: Kukulkan at the base of the west face of the northern stairway of El Castillo, Chichen Itza. Image credit: Frank Kovalchek - CC BY 2.0

Was this mighty snake deity a real historical person?

It is not easy to trace the ancient history of Kukulkan. Like all of the feathered serpent gods in Mesoamerican cultures, Kukulkan is thought to have originated in Olmec mythology and we still know very little about the mysterious Olmec civilization.

The true identity of the god Kukulkan becomes an even greater problem due to the confusing references to a man who bore the name of the Mayan god. Because of this, the distinction between the two has become blurred.

Around the 10th century, a priest or ruler appeared in Chichen Itza, a sacred site that was one of the greatest Mayan centers of the Yucatán peninsula, Mexico where we also find El Castillo, also known as the Temple of Kukulkan.

Kukulkan has his origins among the Maya of the Classic Period, (200 AD to 1000) when he was known as Waxaklahun Ubah Kan, the War Serpent.

Maya writers of the 16th century describe Kukulkan as a real historical person, but the earlier 9th-century texts at Chichen Itza never identified him as human and artistic representations depicted him as a Vision Serpent entwined around the figures of nobles. 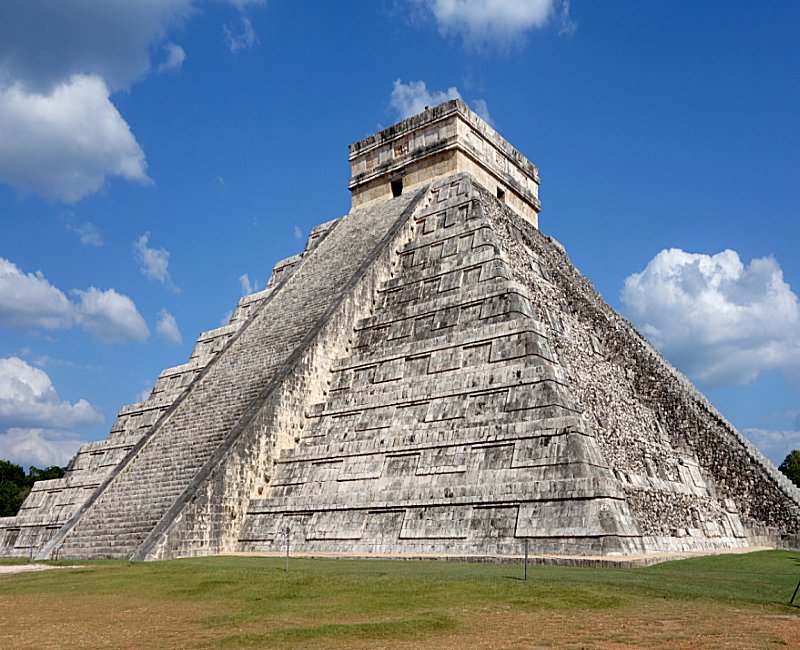 According to ancient Maya beliefs, Kukulkan - popularly known as the Feathered Serpent - was the god of the wind, sky, and the Sun.  He was a supreme leader of the gods, depicted, just like Quetzalcoatl, in Aztec culture and literature whose name originates from the Nahuatl language and means "Precious serpent" or "Quetzal-feathered Serpent". Kukulkan gave mankind his learning and laws. He was merciful and kind, but he could also change his nature and inflict great punishment and suffering on humans.

According to Maya legend, the Maya were visited by a robed Caucasian man with blond hair, blue eyes, and a beard who taught the Maya about agriculture, medicine, mathematics, and astronomy. This being was Kukulkan – the Feathered Serpent.

Kukulcan warned the Maya of another bearded white man who would not only conquer the indigenous people of Central America but would also enforce a new religion upon them before he was to return. Despite the warning, the Maya mistakenly welcomed the invading Cortes as Quetzalcoatl.

The cult of Kukulkan spread as far as the Guatemalan Highlands, where Postclassic feathered serpent sculptures are found with open mouths from which protrude the heads of human warriors.
Hundreds of North and South American Indian and South Pacific legends tell of a white-skinned, bearded lord who traveled among the many tribes to bring peace about 2,000 years ago. This spiritual hero was best known as Quetzalcoatl.

Some of his many other names were:

Sierras E. The Shadow of Kukulkan