A. Sutherland - AncientPages.com - In “Sumerian Art”, R.D. Barnett mentions that a Foundation Tablet with the inscription:

was excavated at Tell al-Ubaid, a small mound located approximately 4 miles north-west of Ur, in what was then, southernmost Mesopotamia. 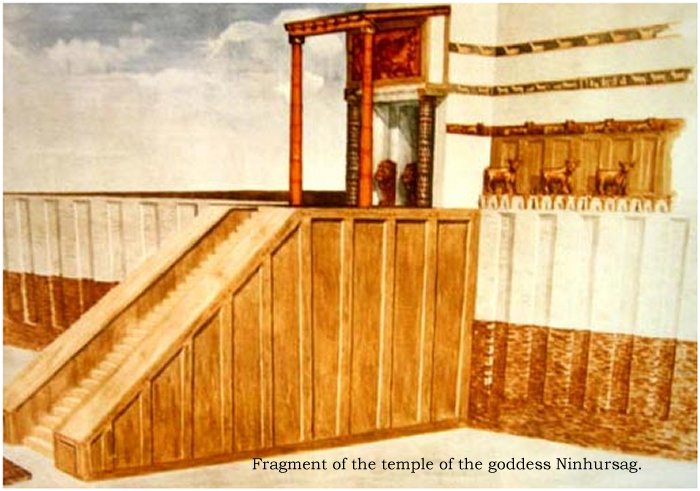 The Foundation Tablet is considered one of the most important findings of this ancient Sumerian site.

Aanepada (king of Ur, about 2500 BC) built it in the early dynastic period, approximately 2500 BC, although, some put this date considerably earlier.

For some unknown reason, this king is not named on the kinglist perhaps Aanepada was not as famous as his father, the first king listed for the first dynasty of Ur (ca. the 25th century BC) on the Sumerian king list.

He is listed to have ruled for 80 years.

Relief from the temple at Tell al-Ubajd depicting Imdugud - the sacred bird with the lion's head, holding in its claws deer.

The same text was also placed on a copper figurine of a bull, unearthed in the area of Tell al-Ubaid; also a small decorative bead found there, was carved with an inscription, specifying the name of Aanepada.
Temple of Ninhursag was built with dried, red bricks on the basis of a stone foundation. 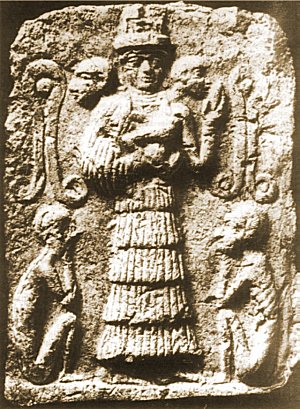 It was situated on a massive, trapezoid-shaped terrace measuring about 32 to 25 meters.

The platform, which had a system of drains and canals, has been preserved in part only to a height of 3.5 m.

The terrace, on the other hand, was a courtyard surrounded by an oval wall.

Further, archaeological excavations revealed several other finds such as columns, more than 3 meter long, the remains of the ceiling beams and some copper reliefs and a frieze with mosaic decoration.

On both sides of the entrance to the temple, there were four bronze statues of bulls with a height of 1.2 m.

Among other decorations, excavators found three decorative friezes; one of them depicted sacred cows of goddess Ninhursag; second one depicting scene of milking cows and the third frieze - a scene from the myth of the bird monster Zu (Anzu).

In Sumerian mythology, Ninhursag was a mother goddess of the mountains, a fertility goddess and one of the seven great deities of Sumer. Ninhursag - "the lady of the sacred mountain" - had many different names including "Great Queen", and ("Lady of Birth").

Temple of Ninhursag - Frieze with a scene depicting milking of cows.

This great lady had its own temple devoted to her and known as the E-Kur ("House of Mountain Deeps") at Eridu.

Two other her temples were situated at Kish and Lagash.

Interestingly, under the layer dated to the king Aanepada’s time, archaeologists found remains of earlier structures, whose date of construction was not clearly specified.