A. Sutherland- AncientPages.com - The "Dwarfie Stane" is a remarkable ancient and huge piece of red sandstone. This 5,000-year-old block is surrounded by mystery, which has not been solved until today.

There is no record of who, in what manner, and for what purpose or purposes, created this great tomb. 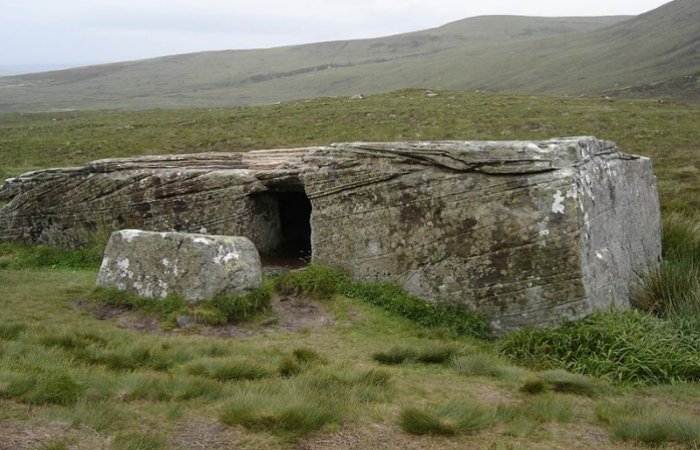 The Dwarfie Stane with the entrance to the tomb. Credit: Grovel - CC BY 3.0

Known as the Dwarfie Stane, the curious stone lies in a steep-sided and remote valley between Quoys and Rackwick on the island of Hoy, in Orkney, Scotland, and is believed to be Britain’s only example of a rock-cut tomb.

It is thought the chamber was carved out between the Neolithic and the Early Bronze Age, probably around 3,000 BC. This estimation is based on similar tombs discovered in the region of the Mediterranean.

What is so special about this gigantic slab? The "Dwarfie Stane" was once hollowed out by someone who had at his disposal rather simple tools, patience, and enormous muscle power of his body. 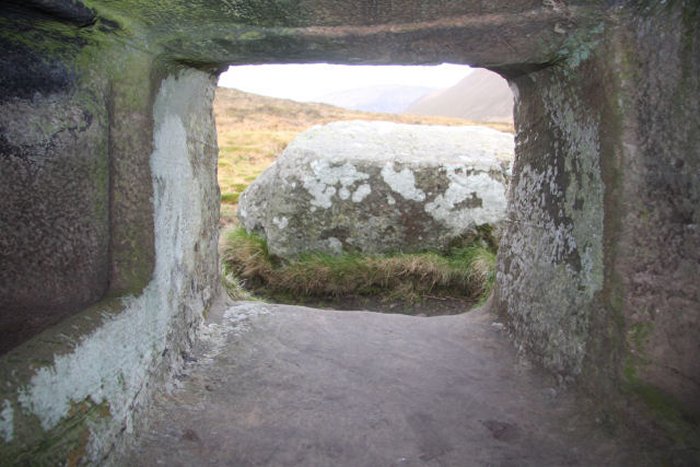 Inside the Dwarfie Stane, the large stone outside once blocked the entrance to this Neolithic rock-cut tomb. Credit: Bob Jones - CC BY-SA 2.0

Interestingly, both “bed-places”, which seem to be too short for anyone of normal stature, are responsible for diverse folk tales and legends about dwarfs and these old stories surround the site.

There was a time when visitors to the “Dwarfie Stane” used to leave offerings at the site. Why? Was the chamber built for a hermit, a monk perhaps, who lived there alone?

It is said that a large sandstone block lying outside the opening was initially used to seal the opening; the mysterious tomb was still sealed in the 16th century.

There is no record of any archaeological excavation being carried out on the mysterious stone slab, nor do we know what, if anything, was found inside.

However, there is a trace after a hole (later filled with concrete), probably an attempt to break into the stone‘s interior via the roof.

According to an ancient Orcadian legend, the Dwarfie Stane was said to be the work of a giant and his wife. A third giant, who wanted to make himself the master of the island of Hoy, imprisoned the gargantuan couple inside the stone. But his evil plans failed because the imprisoned giant managed to find his way out through the roof of the chamber.

A. Peterkin, Notes on Orkney and Zetland: Illustrative of the History, Antiquities...