A. Sutherland - AncientPages.com - Stele of Tell al-Rimah dated to 796 BC, is a stone stela from the reign of the Assyrian king Adad-nirari III (810-783 BC) found in 1967 during archaeological excavations at Tell al-Rimah in Nineveh Province, northern Iraq.

Made of a single slab of hard grey Mosul marble, the stele was found standing inside the cella of a small Neo-Assyrian temple, set beside the podium; the artifact was found in an excellent state of preservation and complete. 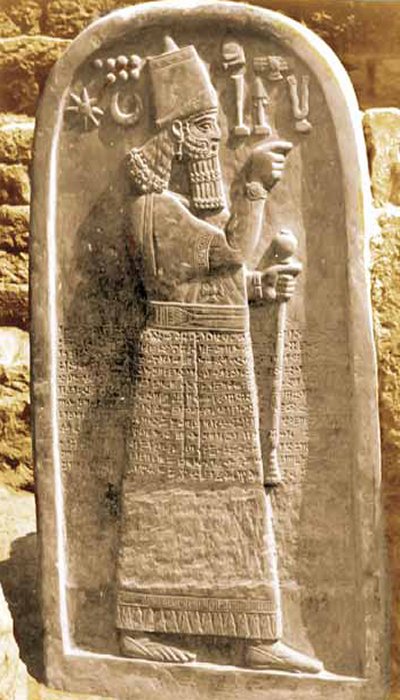 Its size is 130 cm (height) and 69 cm (width at the base). Front side of the stele depicts the king Adad-nirari III surrounded by divine symbols.

The lower part has an additional inscription 21 lines of text.

Part of the text (9 lines) were probably deliberately removed in antiquity.

The writing covered the skirt of the king, whose figure was sculptured in slightly less than life-size. No traces of paint were visible on the stele when it was unearthed.

In the same shrine, archaeologists also discovered two pairs of lion-heads made of a softer and lighter limestone; the heads were used as column bases.

Adad-nirari, a son and successor of king Shamshi-Adad V, was apparently very young at the time of his accession, because for the first five years of his reign, his mother Queen Shammuramat was highly influential person.

His mother has been identified by some, with the mythical Semiramis from the realm of Greek myths; however, many historians confirms the existence of Assyrian queen Shammuramat, wife of Shamshi-Adad V of Assyria and mother of Adad-nirari.

The text on the stele begins with a dedication to the storm god Adad (lines 1-2), after which these will be the name of Adad-nirari III and his genealogy (line 3). Further described are military expeditions of the king to the West, including the submission of tribute to him by the King of Mari from Damascus, King Joash (Assyrian Iu'asu) of Samaria, and the inhabitants of Tyre and Sidon (lines 4-12).

Some fragments of the text are:

[1] To Adad, the greatest god, powerful noble of the gods, first-born son of Anu, unique, awesome, lofty, the canal-inspector of heaven and earth, who rains abundance, who dwells in Zamahu, the great lord, his lord. [2] Adad-Nirari, mighty king, king of the universe, king of Assyria, son of Šamši-Adad, the king of the universe, king of Assyria, the son of Šalmaneser, the king of the four quarters. [3] I mustered my chariots, troops, and camps; I ordered them, to march to the land of Hatti. In a single year, I subdued the entire land of Amurru and Hatti. I imposed upon them tax and tribute forever. [4] I received 2,000 talents of silver, 1,000 talents of copper, 2,000 talents of iron, 3,000 linen garments with multicolored trim - the tribute of Mari' - of the land of Damascus. I received the tribute of Jehoash the Samarian, of the Tyrian ruler and of the Sidonian ruler. [5] I marched to the great sea in the west. I erected a statue of my lordship in the city of Arvad, which is in the midst of the sea. I climbed Mount Lebanon; and I cut down timbers: 100 mature cedars, material needed for my palace and temples.

Another part of the text (lines 13-20) is the part of the inscription, which was removed later but originally mentioned Nergal-erish, the king’s governor who was disgraced and his name was removed from the royal monuments. Nergal-erish must have fallen out of favor with the king.

The text was probably dated to 797 BC or later, as one of the titles related to Nergal-erish, is the title of governor of Hindanu (now, Tell Jabiriyah), an Old Babylonian-Neo-Assyrian city (ca 1800-600 BC), which was govened by Nergal-erish in 797 BC.

The site of Tell al-Rimah was occupied in the third millennium BC, but it flourished particularly during Old Babylonian and Mitanni periods of 2000 BC and in the Neo-Assyrian period. At various times, Tell al-Rimah has been linked with either Qatara or Karana, both cites known to be in that area during the second millennium.

Today, the monument is located in the National Museum of Iraq in Baghdad.

M. C. Tetley, The Reconstructed Chronology of the Divided Kingdom