Why fort Dun Deardail was built, who built it and when it was constructed, remains an ancient mystery, but some have suggested the answers can be found in an ancient myth called the Deirdre of the Sorrows. 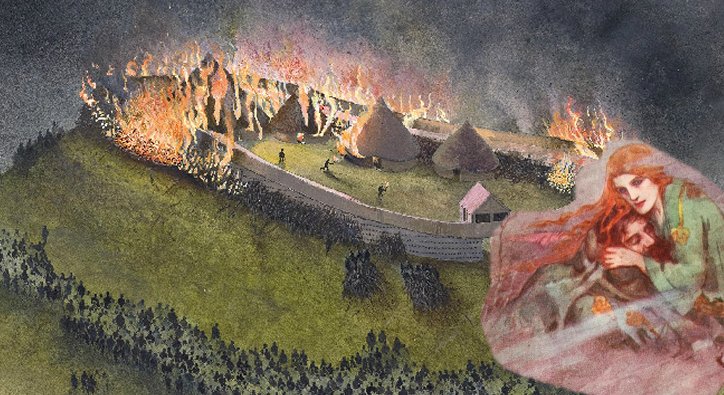 Why was Dun Deardail destroyed?

Sometimes, ancient myths and legends can cast more light on mysterious buildings, places and prehistoric lost civilizations. Can the myth Deirdre Of The Sorrows unravel the ancient mystery of Dun Deardail?

Why Is Dun Deardail Vitrified?

The age and purpose of Dun Deardail is unknown, but scientists think it was probably built in the first millennium BC, although it may have been occupied and reused on several occasions through time.

The fort is vitrified, which means that its wooden and stone defenses were burned at such high temperatures and for such a long time, that the stone fused together. 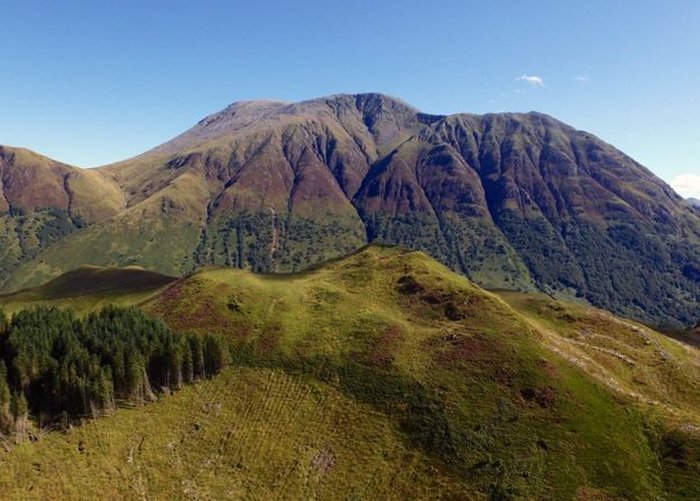 The fort was built on a knoll among the mountains of Glen Nevis. Image credit: Nevis Landscape Partnership

There are many vitrified forts across Scotland and scientists have long speculated about the cause of vitrification. It was previously thought the process was either unintentional or the result of an accident or attack. However, experimental archaeology has shown that vitrification occurs only after long periods of burning: the fires must have been fed and stoked, suggesting that vitrification was an intentional process.

Very little is known about Dun Deardail because the vitrified fort has never been properly investigated by scientists. The first archaeological expedition started in 2015 when Nevis Landscape Partnership broke new ground at Dun Deardail, as a team of volunteers conducted the first excavations of this enigmatic site with the support of archaeologists from AOC Archaeology Group (AOC).

The partnership is a five-year £3.9m scheme consisting of 19 projects and hopefully in the near future we will learn about some of the ancient secrets that Dun Deardail has kept hidden for so many years.

Why Dun Deardail is vitrified is unknown, but according to Forestry Commission Scotland archaeologist Matt Ritchie there were many probable causes for the fire at Dun Deardail, including its Iron Age residents ritualistically setting the structure ablaze. 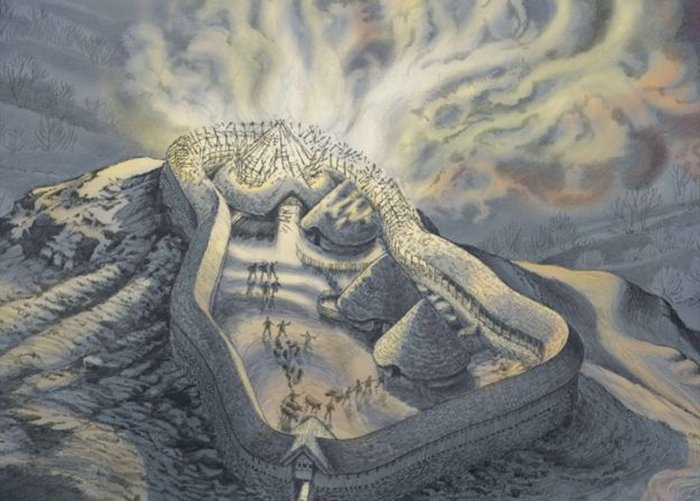 A reconstruction of what the hill fort looked like at the time fire broke out at the site causing the vitrification of its rock defences. Image credit: Chris Mitchell

"It could be anything from an accidental fire to deliberate destruction.

Perhaps at the death of the tribal chief or king they burned the hill fort in the same way the Vikings may have burned the long boats of a chief, or it is deliberate destruction during warfare,” Matt Ritchie said.

The Ancient Irish Myth Of Deirdre Of The Sorrows

It has also been suggested that the name of Lochaber's hill fort may be linked with an ancient Irish myth called Deirdre of the Sorrows. It is tragic tale of the beautiful Deirdre and the myth has been told for more than 2,000 years.

Deirdre of the Sorrows is part of the Ulster Cycle of Irish Myths. It is the last of 'The Three Sorrowful Tales of Erin'.

The legend tells that before Deirdre was born, the chief druid Cathbad foretold that her incredible beauty would lead kings, lords and warriors to fight and die for her love, trying to win her hand in marriage. 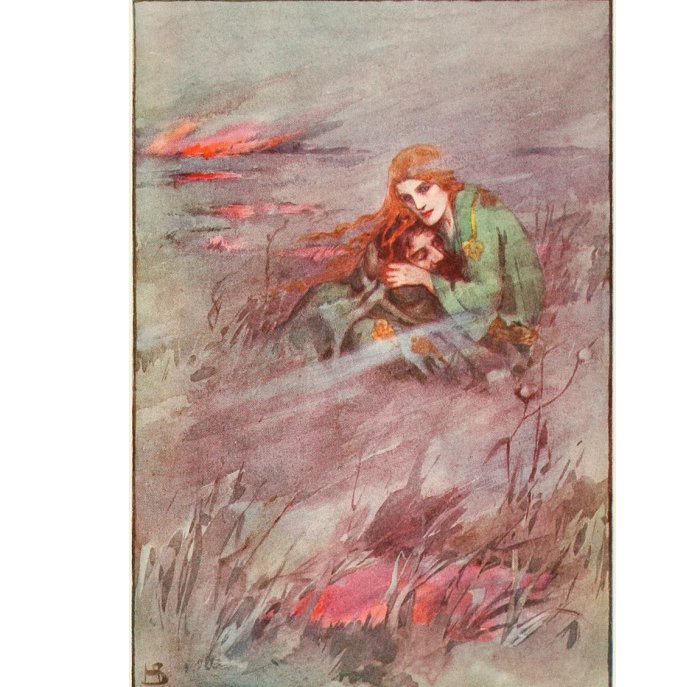 Deirdre’s father was Fedlimid Mac Daill, the royal storyteller who told wonderful tales at the court of Conchobar mac Nessa, King of Ulster.

When King Conchobar learned of the druid’s prophesy he decided to have Deirdre raised in seclusion.

King Conchobar had no intentiosn of letting Deirdre go and planned to marry her when she was older. Deidre was brough up in isolation by Leabharcham, a poet and wise woman. As a young girl, living isolated in the woodlands, Deirdre one snowy day told Leabharcham that she would love a man with the colors she had seen when a raven landed in the snow with its prey: hair the color of the raven, skin as white as snow, and cheeks as red as blood.

Leabharcham told her she was describing Naoise, a handsome young warrior, hunter and singer at Conchobar's court. When Deidre and Naoise met one day, they fell in love and accompanied by Naoise’s brothers Ardan and Ainnlethey fled to Scotland where they lived a happy life.

But the furious, humiliated King Conchobar tracked them down.  as  sent Fergus mac Róich to them with an invitation to return and Fergus's own promise of safe conduct home, but on the way back to Emain Macha Conchobar had Fergus waylaid, forced by his personal geis (an obligation) to accept an invitation to a feast.

Fergus sent Deirdre and the sons of Uisnech on to Emain Macha with his son to protect them. When they arrived, Conchobar sent Leabharcham to spy on Deirdre, to see if she had lost her beauty.

Leabharcham wanted to protect Deirdre. She lied and told the king that Deirdre was now ugly and aged. Unfortunately, King was not convinced and he sent another spy, Gelbann, who managed to catch a glimpse of Deirdre but was seen by Naoise, who threw a gold chess piece at him and put out his eye.

The spy managed to get back to Conchobar, and told him that Deirdre was as beautiful as ever. Conchobar called his warriors to attack the Red Branch house where Deirdre and the sons of Uisnech were lodging. Naoise and his brothers fought valiantly, aided by a few Red Branch warriors, before Conchobar evoked their oath of loyalty to him and had Deirdre dragged to his side. At this point, Éogan mac Durthacht threw a spear, killing Naoise, and his brothers were killed shortly after. 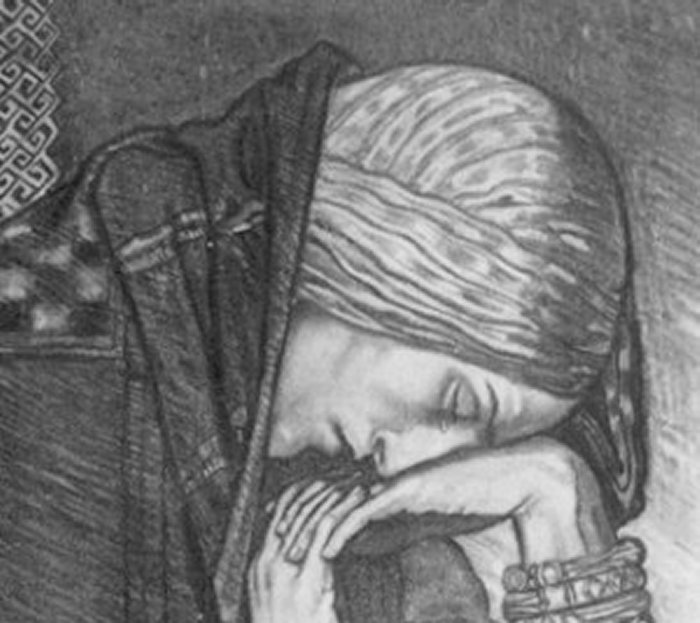 Fergus and his men arrived after the battle. Fergus was outraged by this betrayal of his word, and went into exile in Connacht. He later fought against Ulster for Ailill and Medb in the war of the Táin Bó Cúailnge (the Cattle Raid of Cooley), the Irish Iliad.

After the death of Naoise, Conchobar took Deirdre as his wife. As we all know, love cannot be bought or forced. After a year, angered by Deirdre's continuing coldness toward him, Conchobar asked her whom in the world she hated the most, besides himself. She answered "Éogan mac Durthacht," the man who had murdered Naoise. Conchobar said that he would give her to Éogan. As she was being taken to Éogan, Conchobar taunted her, saying she looked like a ewe between two rams. At this, Deirdre threw herself from the chariot, dashing her head to pieces against a rock.

Is it possible the battles took place at the fort of Dun Deardail? When archaeologists excavate the site, will they then find the skeletons of the ancient kings, warriors and lords who battled to win Deirdre’s heart? Will they find the ancient skeleton of Naoise and his brothers?

We don’t know, but maybe time and future archaeological excavations will help find an answer to these intriguing questions.