This place is shrouded in mystery, and the cemetery has a dark history. It was once a gruesome place where many people suffered before being killed. Some of the wonderful and yet little uncanny old monuments at the cemetery contribute to the eerie atmosphere surrounding you when entering this place.

The Edinburgh vaults and the spooky underground city of the dead might be frightening to visit. Still, Greyfriars Kirkyard is famous for being the most haunted place in Edinburgh, and many do not even dare to visit the cemetery because of its dark reputation. 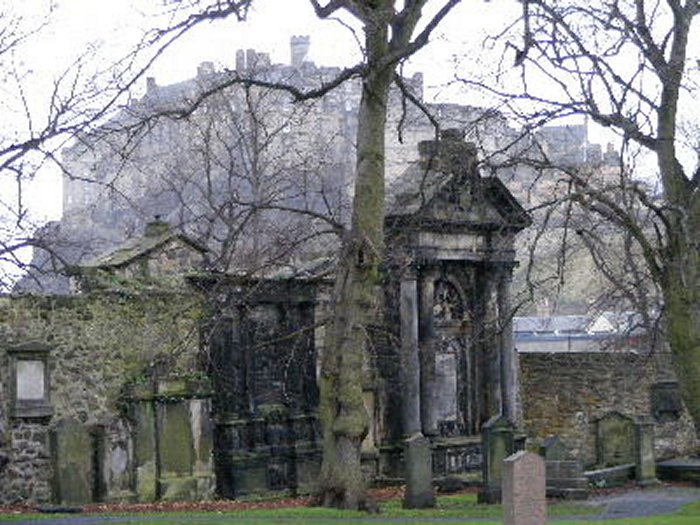 The term "kirk" means "church," and so a kirkyard is a churchyard.  A churchyard is a cemetery that is on church property.

Located in the middle of the Old Town, just a few minutes walk down George IV Bridge from the Royal Mile, Greyfriars takes its name from the Franciscan friary on the site.

The Franciscan Order originally came to Canterbury from Italy in the 13th century. The members of the Order spread across the United Kingdom. Later the Order split into two groups known as the Conventuals, who were friars in the cities -and the Observants - who wanted to keep the old, more isolated ways.  The Franciscans in Great Britain became known as Greyfriars.

The Greyfriars churchyard was founded in 1561. 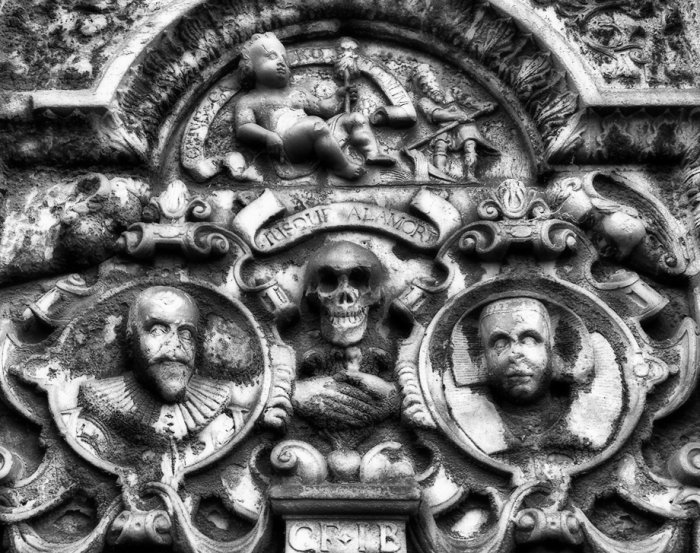 It is a resting place of many prominent citizens, including James Hutton, Robert Adam, Mary Erskine, and Henry Mackenzie. Yet, perhaps the most famous resident of all is Greyfriar's Bobby, the loyal Skye Terrier who kept a 14-year vigil on his master's grave. Both dog and his master, John Gray, are buried here. The faithful dog Greyfriar's Bobby was later immortalized by a Disney film. 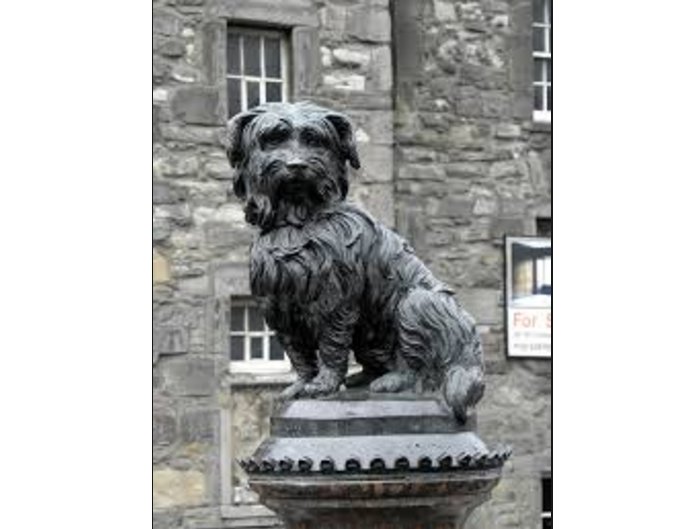 Historically, Greyfriar's Cemetery is best known as the burial ground for the 17th century Covenanters persecuted by "bloody" George Mackenzie in the Covenanters' Prison.

In the 16th century, Roman Catholicism was pushed out of Scotland. A group of people signed covenants in Scotland to maintain Presbyterian doctrines and denounce the Pope and the Catholic Church.  They became known as Covenanters, and they soon became a big problem to King Charles I. 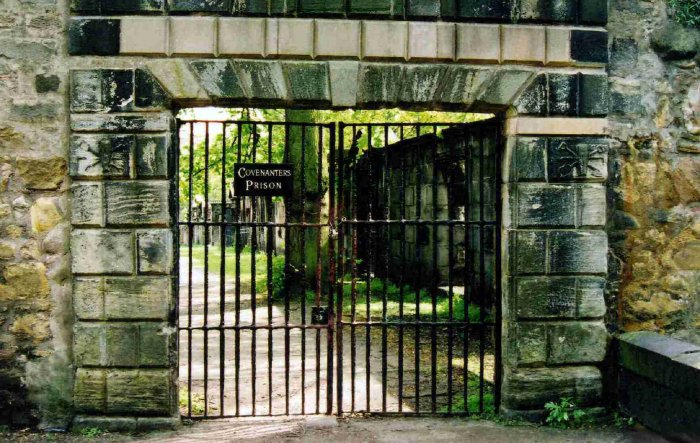 The National Covenant was signed at Greyfriar's Kirk in 1638, and it was an oath to maintain the reformed religion and reject all superstition of the Catholic Church.  When King Charles I tried to push new reforms on the Covenanters, they revolted and defeated the King in the Bishops' War.  Wars continued, and the Covenanters became the de facto government of Scotland.

Later, Oliver Cromwell, fighting for the English Parliament, would defeat the Covenanters, and by 1652, they were decimated.

In 1679, another rebellion was formed, but it was knocked down once again, and as many as 1200 Covenanters were taken prisoner and put into the Covenanters' Prison at Greyfriar's Kirkyard. 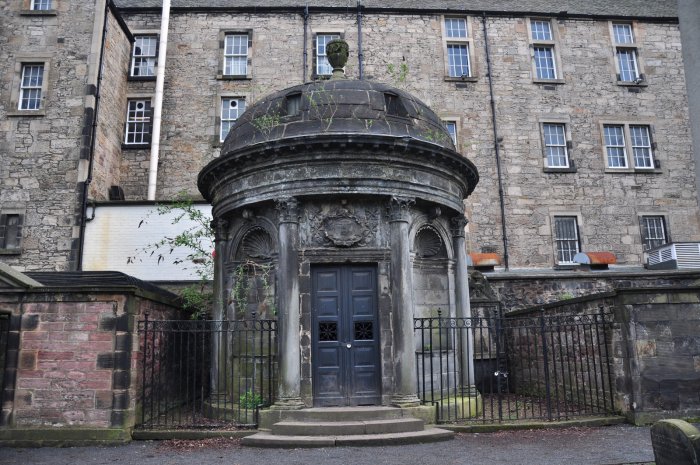 The Black Mausoleum where George 'Bluidy' MacKenzie is buried.

As many as 1,200 Covenanters were imprisoned here in awful conditions in the Covenanter's prison before being hanged at the Grassmarket. By the end of their imprisonment, only 400 Covenanters were alive, and they were sold to Barbados as slaves, and most of them died when the ship transporting them wrecked.  There is a memorial stone to commemorate their suffering for their cause.

Ironically George 'Bluidy' MacKenzie, who persecuted many Covenanters, is also buried here in the Black Mausoleum. 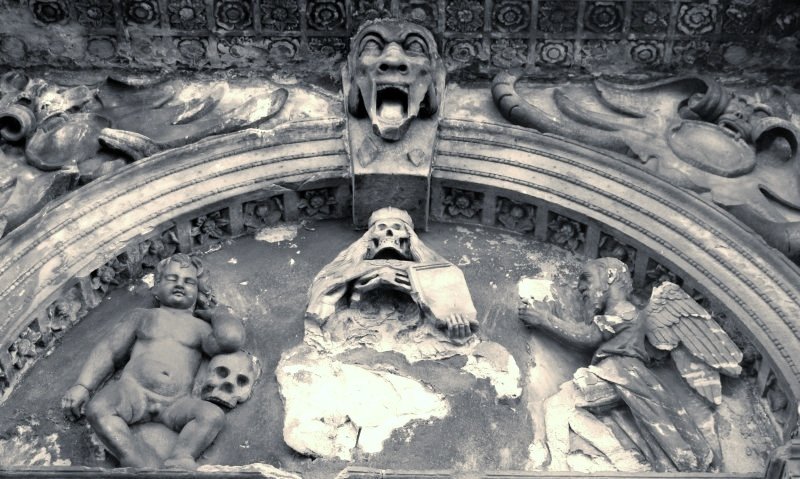 People who have visited the cemetery say they have experienced strange feelings and seen ghosts, and one of them is George 'Bluidy' MacKenzie. Known as the 'MacKenzie Poltergeist, ' many people participating in ghost tours have reported being physically attacked by an unseen force.

Edinburgh, Scotland, is considered one of the most haunted cities in all of Europe, and Greyfriars Kirkyard is regarded as the spookiest place in the city.