A. Sutherland - AncientPages.com - In some myths of the Algonquian tribes of North America, there is a mythological creature – Wendigo - that takes different forms.

It is a cannibal spirit and a monster, which is always hungry. Its scream paralyzes its victims so they’re unable to escape. Wendigo (also known as Windigo, Weendigo, Windago) is so horrific that many victims die of fright just looking at them. 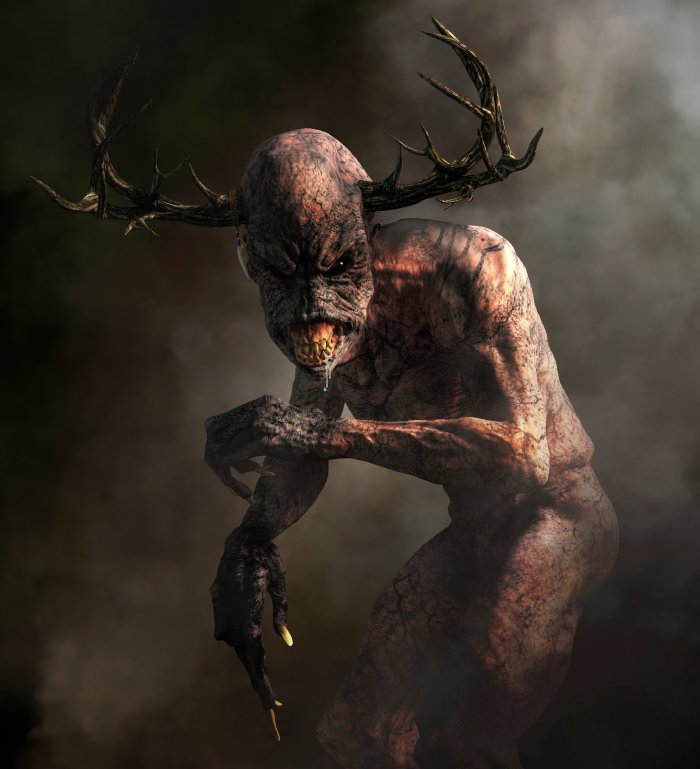 They are the lucky ones. Those who remain alive are eaten alive, slowly. When Wendigo has nothing left to eat, it starves to death. When it sees something, it wants to own it. No one else can have anything. This illness feeds on a spiritual void.

The Wendigo is a danger that surrounds us. It is not only a creature from myths and legends of the ancients.

“There are two kinds of Windigo, although they are interrelated: spirit Wendigos and human Windigos. The name Wendigo derives from an Algonquian root word meaning “evil spirit” and “cannibal.” Jesuit missionaries reported sightings of Wendigos in the 1600s. The Wendigo is an incredibly tall, gaunt spirit of harsh winter, frost, and starvation. Wendigos are spirits of ice, snow, and winter. Their hearts are made of ice. Sometimes they travel in packs. They allegedly like to play catch or kickball with human skulls.” 1

The Algonquian Native Americans represent the most extensive and numerous North American groups, with hundreds of tribes speaking several related dialects of the language group, Algonkian. The rich mythology of these people who lived in most of the Canadian territory below the Hudson Bay and between the Atlantic Ocean and the Rocky Mountains - survived many generations and so did the Wendigo, a monster, and bogeyman.

However, his abilities and evil doings vary depending on the locality where the legends were gathered. One thing is sure, this monster spirit is not within the human, nor does the spirit manipulate the person. Instead, the human takes on the Wendigo’s characteristics and behaves exactly like one. It means such a victim prey on other people, consuming them. It is a kind of an infection that usually is acquired voluntarily (through rituals) or not.

The Wendigo has the power to possess a human being, and so it is able to alter its victim to become a cannibal.

Not only cannibalism is associated with the Wendigo but also with murder and voracious greed and this kind of behavior has always been condemned in these indigenous communities. In fact, certain people would even wish to become Wendigos in order to have the power, or perhaps for protection against enemies, or even to punish others.

In some myths and legends of the Algonquin-speaking peoples, those who commit sins such as selfishness, greed, or cannibalism, are turned into a Wendigo - as punishment.

Among the peoples of Canada, around the Berens Lake, located in Manitoba, Canada, along the eastern shore of Lake Winnipeg the Wendigo is an amphibious being like an alligator with bear’s feet or cloven hooves.

The creatures are described as “exceptionally tall but gaunt and emaciated. They usually lack clothing, no matter how far below zero the temperature. The Windigo may be sensed before it is seen or heard: those in close proximity often feel chills. Sometimes their arrival is accompanied by blizzards. Human Windigos do not achieve the immense height of their spirit counterparts.” 1

In the beliefs of the Chippewa Indians, also known as the Ojibwe, this evil creature is an ogre, which is focused on children to obtain their compliant behavior. Along with other indigenous tribes such as Eastern Cree, Westmain Swampy Cree, Naskapi, and Innu, the Ojibwe describe the wendigo as a giant,  many times larger than human beings.

In Algonquian folklore, however, the Wendigo is the spirit of a lost hunter who now mercilessly preys upon humans in a cannibalistic manner.

The Wendigo is never happy; he is never satisfied with his killings and consuming of the bodies; he is constantly searching for new victims. His hunger is limitless.

Native Languages Of The Americas