A. Sutherland - AncientPages.com - Thales of Miletus is counted among the seven sages of ancient Greece. He is considered the father of Greek mathematics, as well as the first European scholar and philosopher.

Many theorems in geometry are attributed to him, including the so-called ‘theorem of Thales’. Thales was described by Aristotle (384–322 BC)  one of  the greatest philosophers of all time,  as the founder of the Ionic Philosophy, and so the founder of Greek Philosophy as a whole. 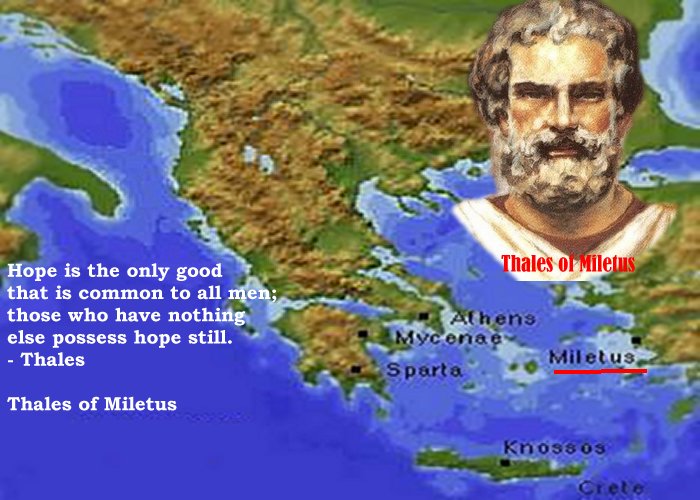 He is renowned for correctly predicting a solar eclipse, figuring out how to measure the height of the pyramids in Egypt, calculating the real length of a solar year to a high degree of accuracy, and also for many other achievements in fields of philosophy, mathematics, and engineering.

He marked the beginning of one the oldest and finest philosophy - the Greek Philosophy.

The Ionic School was represented by pre-Socratic group of Greek philosophers of the 6th and 5th century BC; most of them were born in Ionia, an ancient region of central coastal Anatolia in present-day Turkey, the region nearest İzmir, which was historically Smyrna. These philosophers focused their minds on the beginnings of the universe, the forces which shaped it and the materials of which it is composed.

Thales believed that "all things were full of gods" and called the soul the principle of movement. He believed in the immortality of the soul. He observed things, thought about them intensely and used his tool of reasoning to explain many things.

Thales lived in the city of Miletus, which is current day Milet in Turkey), and was highly respected across Asia Minor. His extensive knowledge of astronomy indicates that he was educated at some point in Egypt or Babylon, the major centers of education. 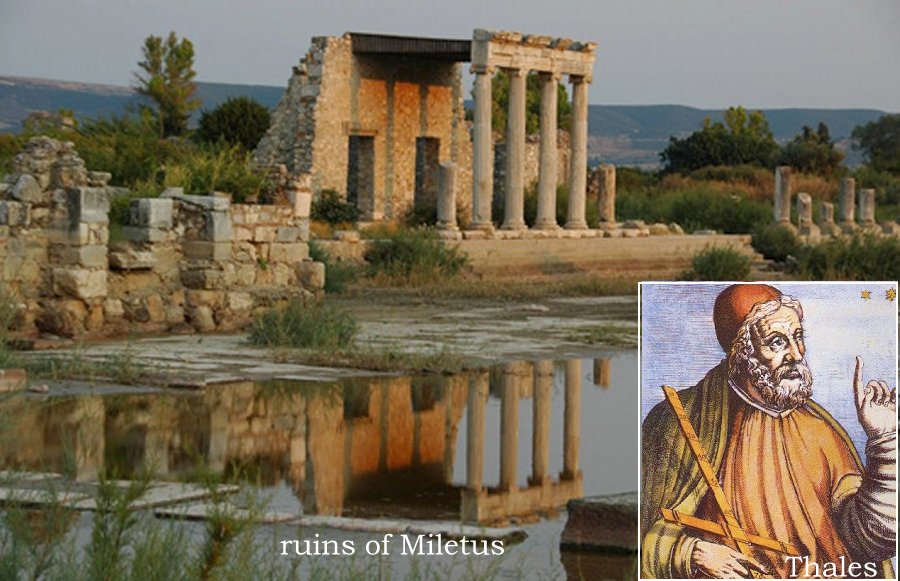 For a certain period of time, he lived at the court of the King of Lydia, and it was during a battle between Lydia and Medes in 585 BC, that he famously predicted an eclipse of the sun on eve of great battle.

The phenomenon passed over the battle field and gave a strong uncanny sensation of approaching disaster. The combatants saw the eclipse as disapproval of their warfare, and as a warning, they felt  great fear and anxiety They ceased fighting and a peace agreement was reached between the two kings.

The prediction of a solar eclipse by Thales was one of the most remarkable events, which was widely celebrated among Thales’ contemporaries and it has surprised modern scholars as well. However, there are no ancient accounts that explain his great achievement and modern attempts to reconstruct Thales’ approach to the phenomenon – unfortunately failed.

Moreover, it has long been argued that any reliable prediction of a solar eclipse was impossible before Hipparchus of Nicea (190 BC - 120 BC), an ancient Greek mathematician, astronomer and geographer, regarded by many historians as the greatest astronomical genius among the ancient Greeks.

The fact remains that the eclipse did occur within the period Thales accurately specified. How Thales foretold the eclipse is not known.

Modern astronomy confirms that the eclipse did occur, and was total.

Thales is also well-known for figuring out how to measure the height of the pyramids in Egypt, how to calculate the real length of a solar year to a high degree of accuracy, and many other achievements in fields of philosophy, mathematics, and engineering.