A. Sutherland - AncientPages.com - He was one of the most influential philosophers of all time and one of the greatest Greek philosophers. His life, enigmatic personality, and thoughts strongly influenced ancient and modern philosophy.

Many still consider Socrates the "Father of Western Philosophy," but in his native Athens, he was both recognized and controversial. 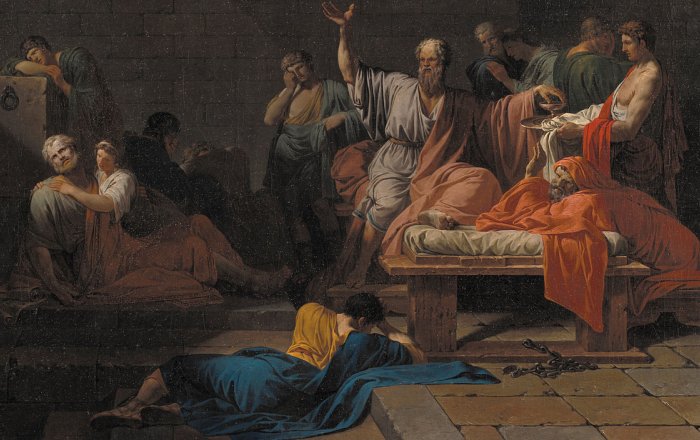 Born in 470/399 BC in Athens, Greece, Socrates was the son of a mason and a midwife. He began work early as a sculptor and stonemason, and for some time, he joined the army and participated in the Peloponnesian War (431 to 404) that was fought between Athens and Sparta.

He was a brave soldier and ended his life as a brave man.

These records show that the great man worked hard before he finally focused his mind on philosophy.

Surrounded by a small group of admirers, Socrates is portrayed as a man of great insight, integrity, self-mastery, and brilliant, challenging skills.

It is unclear how the philosopher earned a living, but he attracted a group of young men who came to learn and study with him.

He had his Socratic method, according to which one must search for general, commonly held truths that shape beliefs and scrutinize them to determine their consistency with other views. Socrates sought to teach through a path of self-inquiry because self-inquiry is the humans' most potent instrument. Socrates – the great mind of the ancient Greek world - was always aware of the limitation of his knowledge.

He did not claim to have the answers but asked his students because he wanted them to think for themselves, question their own beliefs and dogmas, and search for truths.

Socrates said: 'I cannot teach anybody anything; I can only make them think,' and yet he was an excellent teacher for those who wanted to listen to him and learn. He used to say he was wise because he admitted he was ignorant. He also believed a person had to do what he thought was right, no matter what. He says the most extraordinary knowledge comes when we try to understand ourselves.

Among many stories about Socrates, there is, for example, one that can teach us so much:

One day, the great philosopher, accompanied by some of his students, went to see a well-known 'soothsayer.' Asked to speak about the nature of Socrates, the 'soothsayer' replied that Socrates had all the negative qualities of vanity, ego, fear, and hatred.

At this, his students were outraged because they didn't see these qualities in their teacher. However, at this point, the soothsayer continued. True, Socrates has these qualities, but unlike others, he can rise above them and keep them locked away.

On the streets of Athens, Socrates taught conducting diverse disputes with random passers-by on the streets; his way of teaching earned him both popularity and hostility.

Once a brave soldier, he started questioning government atrocities and attracted their dislikes. He was offered to choose between his death and his surrender to the government. If Socrates had rejected his beliefs, he could have been free and had another option. He could have tried to escape.

As a philosopher, however, he felt it was more important to stick to his beliefs.

To Socrates, surrender was equal to suicide. So he decided to embrace death. He was sentenced to death by hemlock poisoning for impiety and spoiling the youth. He died in 399 BC.