Cook was born in north-east England in 1728, and in his late teens, he worked on ships along the English coast and the Baltic Sea. 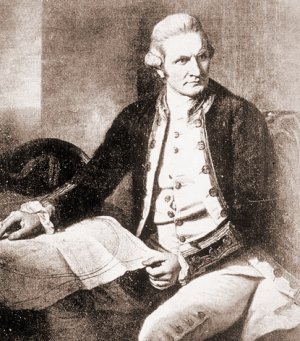 In 1755, he joined the navy, seeing action in Canada and surveying the St Lawrence River, which resulted in the British capture of Quebec.

On 26 August 1768, The HMB Endeavour set sail from England's Plymouth Harbour, under the command of Captain Cook, an accomplished surveyor, astronomer, and navigator.

The ship's crew was instructed to make for Tahiti, where they would observe and record the transit of Venus across the face of the Sun.

Cook also carried additional instructions from the Admiralty ordering him to explore the Southern Ocean in search of Terra Australis incognita - the unknown southern land.

After the war, Cook's skills were put on further display when he mapped the coast of the Canadian island of Newfoundland.

Under commission from the Royal Society, the Endeavour entered the South Pacific via Cape Horn, reaching Tahiti in April 1769 where the crew observed the transit of Venus on 3 June.

Cook's instructions next took him south, where he was to determine the existence of a southern continent. The Endeavour circumnavigated and mapped New Zealand before travelling west, where on 19 April 1770 Cook spotted and claimed the east coast of Australia for the Crown.

He named it New South Wales.