A. Sutherland - AncientPages.com -  A sculpture of the Pacific God A’a  is a fascinating piece of art. The figure of A’a is probably the most famous Polynesian sculpture in the world. It is designed to carry a human skull and bones.

The enigmatic sculpture of this deity has influenced poets and artists across the world and first of all, people in Polynesia. 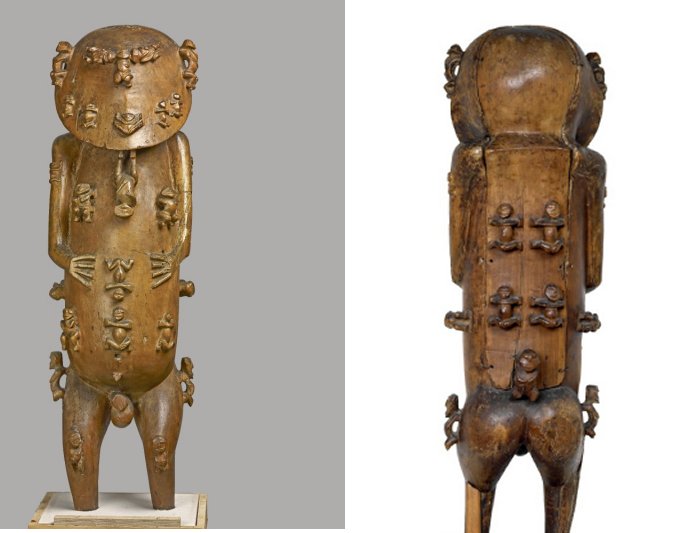 God figure (made of wood) known as A’a, carved in an anthropomorphic form with 30 small anthropomorphic figures over the surface of the body and making up the facial features. A lidded cavity in back. Image credit: The British Museum

Henry Moore (1898 – 1986), an English sculptor and artist, and the famous Pablo Picasso both had their own casts made of the figure; poet William Empson wrote a poem about A’a and the Museum, and it continues to inspire people today.

A’a was created to contain the divine – the figure would originally have been used to hold the skull and bones of an important ancestor.

A’a was an important and sacred figure in Rurutu, and was one of the most highly prized pieces collected by the London Missionary Society (LMS).

In 1821, islanders on the Polynesian island of Rurutu gave a group of British evangelical missionaries a figure of a deity known as A’a as a symbol of their conversion to Christianity.

Thirty unique small figures were springing from its body, representing fertility and the god’s ability to create life.

Today it is one of the most famous, intriguing and unique objects in the British Museum.

The style of Rurutu, to the north of the group, uses the star design and chevrons but is otherwise less ornate. Some objects were traded to other islands, the most common being fly-whisk handles, which were exported to Tahiti.

Each handle was topped by a pair of figures placed back to back. The shaft below was incised with chevrons or, more characteristically, consisted of a vertical series of spools. Slender spearheads were carved with miniature stylized pigs, resembling phalli. 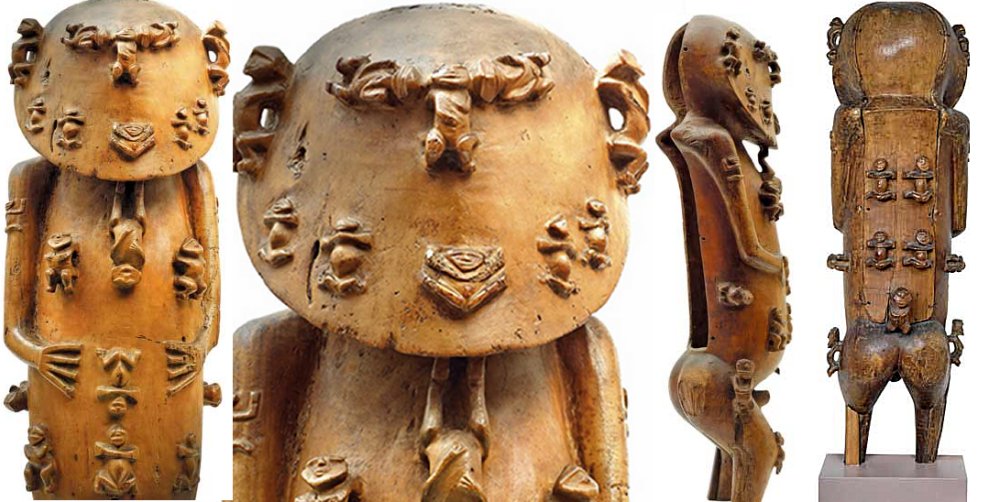 Researchers realized that A’a is made of sandalwood. Wood samples showed it was made much earlier than previously thought – possibly as early as 1505. Its cavity is designed for a human skull and long bones to fit perfectly within, wrapped in sacred materials such as the barkcloth, feathers, and human hair which were also discovered inside. Credits: British Museum

Perhaps the only surviving example of figure sculpture from Rurutu is one of the most impressive Polynesian sculptures: an image of the god A’a in the act of creating men and other gods. The primary figure, in Society Islands style, has 30 small stylized figures arranged symmetrically on its torso, limbs, and face, 10 being placed as the facial features.

The figure has a hollow back and when found contained 24 small figures (now lost).

Recently, researchers realized that A’a is made of sandalwood. Wood samples showed it was made much earlier than previously thought – possibly as early as 1505.

Its cavity is designed for a human skull and long bones to fit perfectly within, wrapped in sacred materials such as the barkcloth, feathers, and human hair which were also discovered inside. One tiny red feather, lodged on a splinter, had gone unnoticed for 200 years.

Gell A. Art and Agency: An Anthropological Theory