A. Sutherland - AncientPages.com - Enigmatic Ales Stenar (in English, Ale’s Stones) are located high on the ridge above the old-fashioned fishing village of Kåseberga, Sweden.

Myths, legends, and mystery surround this fascinating megalithic formation consisting of 58 upright boulders and one vertical (weighing up to 1.8 tons each) - placed in a gigantic ship formation, 67 meters in length and 19 meters wide. 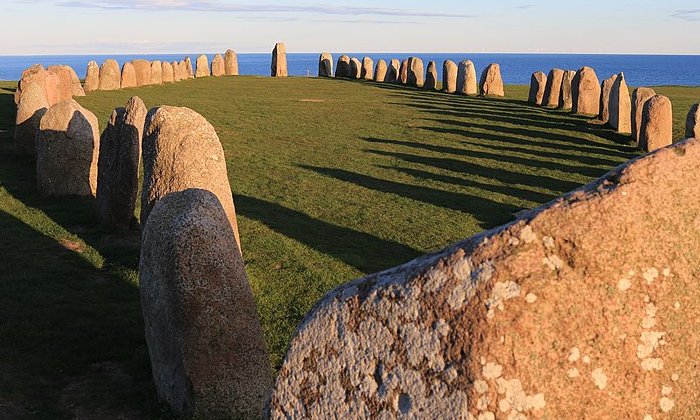 The Ales Stenar constitutes Sweden’s largest remaining stone ship and this kind of stone circles date back to the Bronze or Iron Age. However, not even experts know why they are known as ‘Ale’s Stones’.

According to some, the name Als (or Ale) means a "sanctuary" in the ancient Nordic language, and according to others, it means a "ridge," which would correspond well to the topographic location of Ales Stenar, on a 37 meter-high ridge of the Baltic shore.

The monument was first restored in 1919 when the monoliths were returned to their original position and again in 1956, which is what we see today. 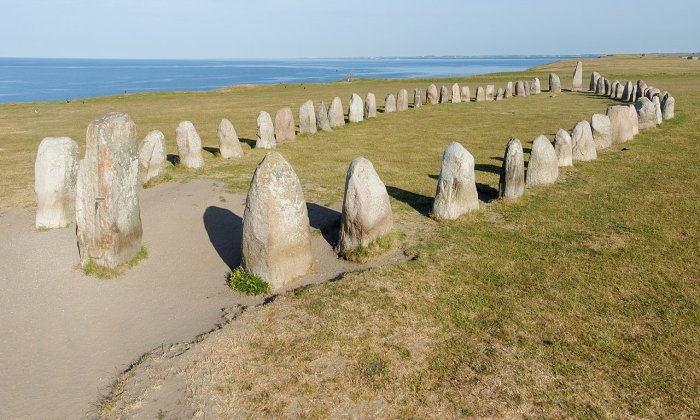 Were the stones a gathering place for sun cult worshippers, or used to determine the winter and summer solstices? This mystery seems to remain unsolved.

There are many theories regarding their prehistoric function and its dating is much debated as well. Stone ships are normally interpreted by archeologists as cult centers or burial monuments.  Another explanation could be that they functioned as a sun calendar because the monument seems to be erected in such a way that the sun during the summer solstice sets at the monument's northwest point and rises at the opposite point during the winter solstice. 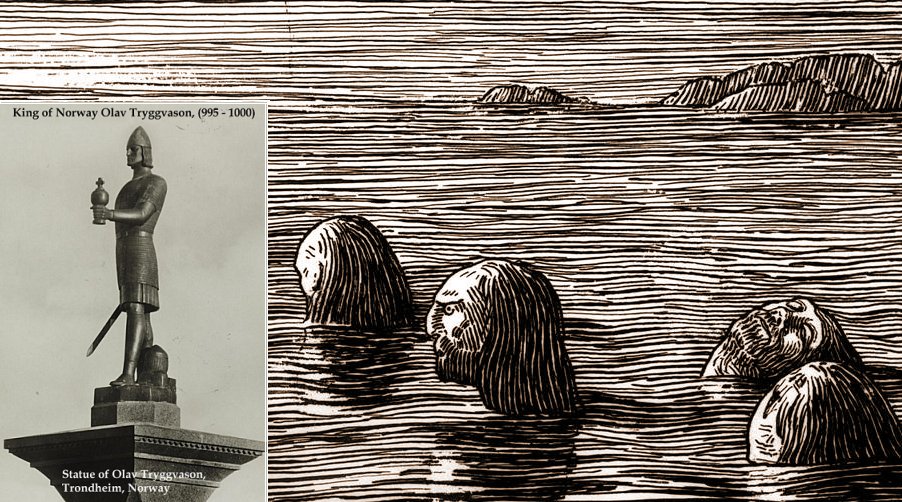 Are Ale's Stones a monument to a Viking chieftain, Olav Tryggvasson, who was buried on this ridge together with his ship?  (background painting via Nordvegen Historiesenter)

Whatever the intention originally might have been one must assume that the significance of the monument has been connected to something very central and significant in the people’s lives at the time. 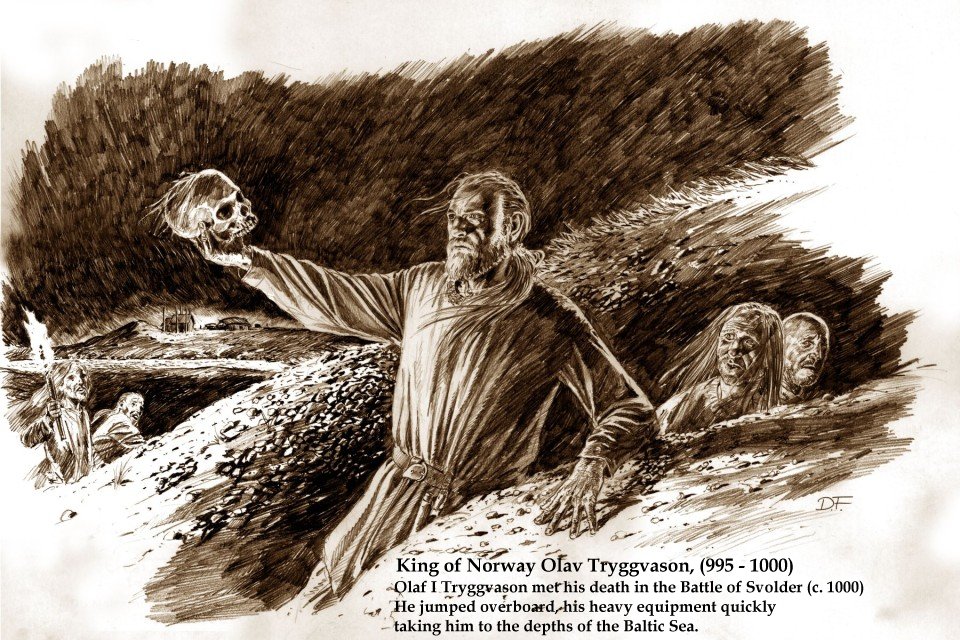 Olaf I Tryggvason met his death in the Battle of Svolder (c. 1000). He jumped overboard, his heavy equipment quickly took him to the depths of the Baltic Sea. Credit: Painting by DF (unknown artist) - Nordvegen Historiesenter

This is in line with information about other monumental stone ships, especially in the area that is now Denmark.

Did Ale’s Stones stand-alone, or had other monuments existed on the same site? What was the exact number of boulders transported to the site? Were there 59 boulders from the beginning at the ancient site of Kåseberga?

There are legends related to the mysterious Ale’s Stones. One says that "Ale" was once considered to be the name of a Viking chieftain that lived between 700 and 1000 CE. There are, however, no known historical records that could support such a Viking name.

The first detailed drawing was made in 1777 by antique C.G.G Hilfeling, a cartoonist, who depicted many ancient monuments in Scania. The first known photograph of Ales stones was years from 1914. source

Another legend has it that about the year 1000, a Viking chieftain, Olav Tryggvasson, was buried on this ridge together with his ship. Oskar Montelius (1843-1921), the famous scholar in Swedish prehistoric "heathen" times, when discussing in 1917 the shape of the Ale "ship", suggested that it was a collective monument for the Vikings who had perished in their voyages and conquers.

Archaeologists and geophysicists examined the site in 2006 with the help of geo-radar and magnetometer, which makes it possible to see contours of that what is hidden under the surface of the ground in different layers.

The examinations showed that Ale's Stones is much larger and has a much more complex structure than what is visible above ground today. Under the surface of the ground, there are traces from several structures, both a smaller ship formation and one or more round stone circles.