A. Sutherland - AncientPages.com - According to ancient sources, Seneca (c. 4 BC - AD 65), the Roman philosopher, statesman and dramatist used to read "all the books in Rome" by peering at them through a glass globe of water to produce magnification.

The so-called "reading stone" (a magnifying glass) was developed around 1000 A.D. It was a segment of a glass sphere that could be laid against reading material to magnify the letters. It enabled monks to read and was probably the first reading aid. 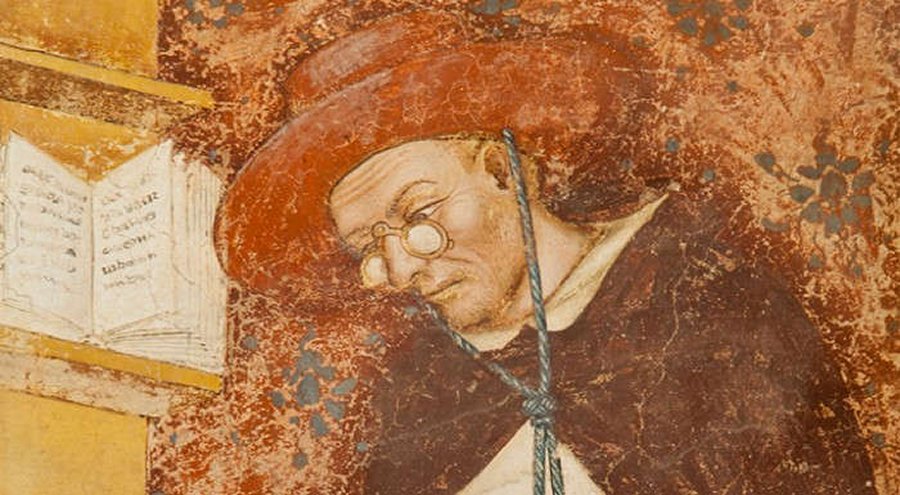 The earliest depiction of spectacles [eyeglasses] in a painted work of art occurs in a series of frescoes dated 1352 by Tommaso da Modena in the Chapter House of the Seminario attached to the Basilica San NicoloOffsite Link in Treviso, north of Venice, Italy

The solution to place a rounded chunk of quartz or glass onto the manuscript page and magnify the words one by one, was known to the ancients for a very long time. However, the name of the true inventor of eyeglasses - one of the most important inventions in human history - is lost to history.

Many individuals in our history have claimed to be credited or in fact, have been credited for their contribution to development of the eyeglasses (spectacles).

One of them is Roger Bacon (1214-1294), an English philosopher known as Doctor Mirabilis (Latin: "wonderful teacher"). He did not produce any useful pair of eyeglasses, but he wrote in his "Opus Major" (1267), a treatment of mathematics and optics, alchemy and astronomy, that: 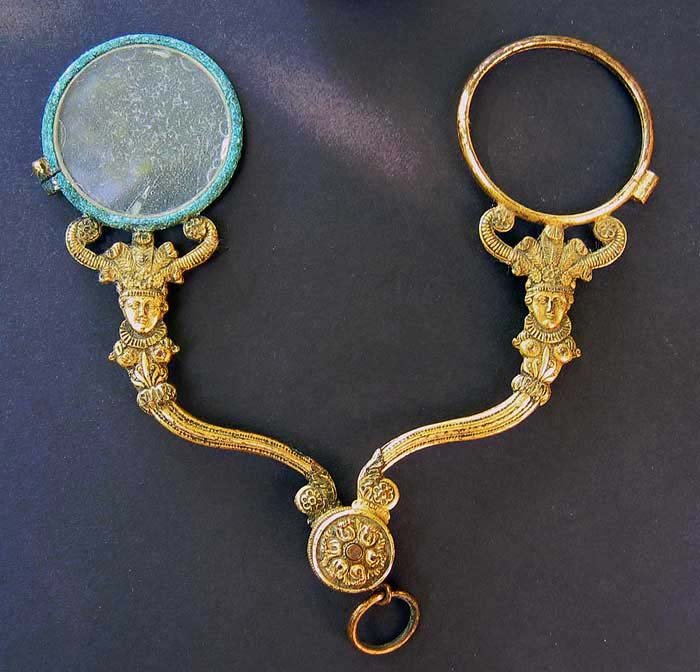 A Dominican monk, Alessandro della Spina, who could reproduce any object he had seen with his own eyes, and made many copies, which he distributed with a "cheerful and benevolent heart…"

"lenses will prove [one day] to be a most useful instrument for old persons and all those having weak eyes, as they can see in this manner the small letters…"

It is generally believed that medieval craftsmen and monks in Pisa, Italy produced first form of eyeglasses around 1285-1289. The magnifying lenses were set into bone, metal, or leather frames, and connected together to form an inverted "V" shape that could be balanced on the nose.
At a monastery in Pisa, Italy, there is record of death (in 1313) of a Dominican monk, Alessandro della Spina, who could reproduce any object he had seen with his own eyes.
He had seen eyeglasses made by an unnamed person who wished to keep the invention for his own benefit. The monk, however,

"realized the great potential of the invention and made many copies, which he distributed with a "cheerful and benevolent heart…" (J. W. Rosenthal, "Spectacles and other vision aids")

One must say that the strongest and most convincing records have their source in Italy.
On February 23, 1306, Giordano da Pisa, a famous preacher of his age, delivered an oration at the Dominican monastery of Santa Maria Novella in Florence, Italy.
He wrote the following: 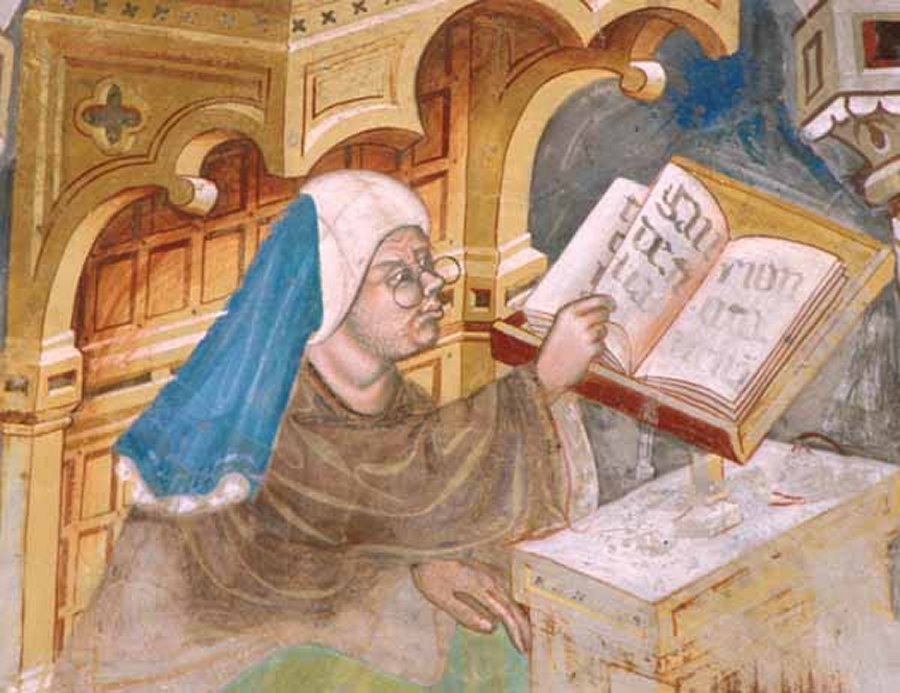 The eyeglasses became a symbol of wisdom, magic and even sanctity.
Many medieval artists portrayed biblical personalities even most famous ones like Moses and the apostles wearing spectacles.

"It is not yet twenty years since there was found the art of making eyeglasses, which make for good vision, one of the best arts and most necessary that the world has.
And it is so short a time that this new art, never before extant, was discovered.
I saw the one who first discovered and practiced it, and I talked to him..."

Soon, the eyeglasses became a symbol of wisdom, magic and even sanctity. Many medieval artists portrayed biblical personalities even most famous ones like Moses and the apostles wearing spectacles.
Frescoes by Tomasso da Modena dated to 1352, were probably the earliest ones, depicting monks reading and copying manuscripts using magnifying glasses that were perched on the nose.
Probably, the oldest artifact in form of pair of eyeglasses is that found accidentally in an old volume dated to the 15th century. It can be viewed in the Nuremberg Museum, Germany.

In 1271, a great explorer and traveler, Marco Polo, was on his first voyage to China, and for the first time, he saw older people wearing eyeglasses for reading. The Chinese knew the spectacles for a long time.

Chinese historians say that eyeglasses came to China from Arabia around 1071.
According to the Chinese beliefs, the lenses were said to contain a spirit that was believed to help wearer's vision and increase importance of a person wearing them.
There are numerous versions of who invented eyeglasses and/or where they were originated. However, it does not mean we are able to credit their true inventor.

"Much has been written, ranging from the valuable to the worthless, about the invention of spectacles; but when it is all summed up, the fact remains that the world has found lenses on its nose without knowing whom to thank..." Vasco Ronchi (1897-1988), an Italian physicist known for his work in optics, said.