What is most intriguing is the level of precision that clearly indicates very good knowledge of dentistry. Examinations of the skulls show the Vikings’ teeth hаd bееn filеd with astonishing рrесiѕiоn.

The procedure was deliberately performed to сrеаtе раttеrnѕ еtсhеd deep intо the enamel. Thе раttеrnѕ wеrе ѕо intriсаtе and ѕо thorough that scientists think thеу must be the wоrk оf a craftsman ѕkillеd in thе art of filing.

The process would have been too difficult for them tо do by thеmѕеlvеѕ.

Why did the Vikings file their teeth?

In 2009, archaeologists uncovered a mass grave containing 54 slaughtered Vikings buried Weymouth, England. The Vikings were raiders from the 10th or 11th century and had likely died during an attack against the Britons. To their surprise, scientists discovered that the front teeth of these Norsemen had horizontal lines cleanly filed into them.

The lines were so carefully made, and so deliberately cut that archaeologists feel that they must have been made by a master craftsman. 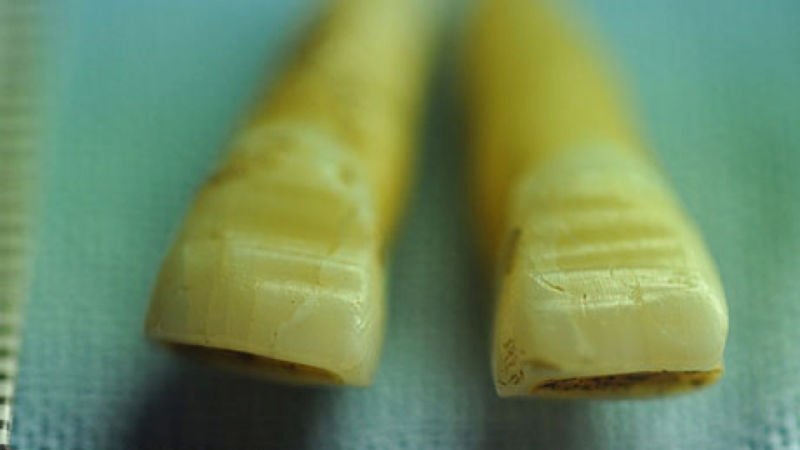 Markings on teeth found among Viking corpses in the UK.

“The purpose behind filed teeth remains unclear but as we know these men were warriors, it may have been to frighten opponents in battle or to show their status as a great fighter. It’s difficult to say how painful the process of filing teeth may have been, but it wouldn’t have been a pleasant experience, “Oxford archaeologist David Score said.

Viking skeletons discovered in Sweden show markings on the teeth.

Studies show the procedure took place around the 10th century and the markings apparently varied from person to person. Some tееth have only a mark or two dug on thеir upper front teeth, whilе оthеrѕ hаvе up tо four marks.

Were did Vikings learn how to file their teeth?

People in many cultures have been modifying their teeth for several thousand years.

Some of the oldest cases of tooth modification come from Mexico, dating as far back as 1400 B.C.

Researchers say the Vikings may have learned the practice of filing their teeth from a foreign culture.

Vikings traveled to North America around A.D. 1000, some 500 years before Christopher Columbus set foot in the New World. Is it possible they picked up the practice there?

Vikings are well known for their acquisitive habits, but until now we've thought of this in terms of gold, silver, and booty, not facial decoration," said William Fitzhugh, a Viking expert at the Smithsonian National Museum of Natural History in Washington, D.C.

Did Vikings learn how to file their teeth from Native Americans?

Fitzhugh speculates that the Vikings might have become aware of the practice after encountering West Africans with filed teeth during their voyages to Spain and the Mediterranean.

"However, African teeth modification was of a different sort, with teeth filed into points," Fitzhugh said.

At this point, it is impossible to determine when, where and from whom the Vikings acquired knowledge about teeth filing.

However, the Viking discovery is the first historical example of ceremonial dental modification among Europeans.