AncientPages.com - Question: What was the Egyptian blue?

Answer: The Egyptian blue is the world’s oldest artificial pigment. It appeared about 5,000 years ago in a tomb painting dated to the reign of Ka-sen, the last king of Egypt's First Dynasty.

Scientists have discovered that the Egyptian blue pigment has extraordinary properties and will enable us not only to reconstruct the past, but also possibly to shape the technological future. 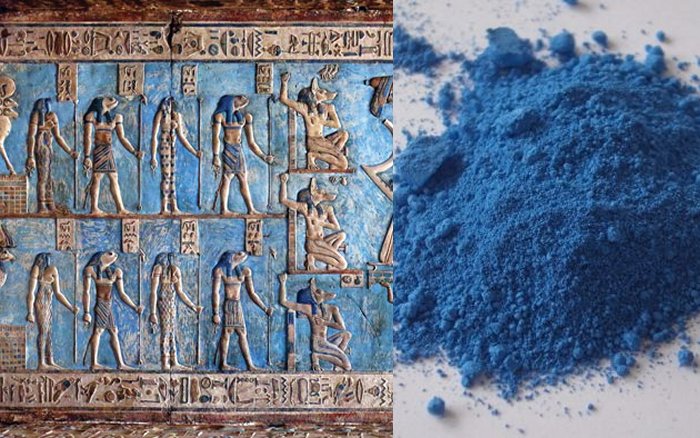 The material giving Egyptian blue its color is calcium copper silicate. It was made by grinding sand, lime and copper (or copper ore) and heating the mixture in a furnace.

Egyptian blue was widely used in ancient times as a pigment in painting, such as in wall paintings, tombs, mummies’ coffins and a ceramic glaze known as Egyptian faience. The fact that it was not available naturally meant that its presence indicated a work that had considerable prestige.  Its use spread throughout Egypt, Mesopotamia, Greece, and the far reaches of the Roman Empire. It was often used as a substitute for lapis lazuli, an extremely expensive and rare mineral sourced in Afghanistan.

Scientists have noticed that when irradiated with visible light, Egyptian blue emits near-infrared rays with exceptional strength, with even single particles of the pigment detectable from a distance of a few yards.

This suggests Egyptian blue could have a variety of modern applications. For example, it could soon be used in advanced biomedical engineering. Expanding on the ancient Egyptian concept with the pigment's near-infrared-emitting property, scientists can also use it as a nano-ink.

So, the Egyptian blue is certainly more than just a color.