Ellen Lloyd - AncientPages.com - Ancient Egyptians did not differ much from us when it comes to enjoying playing with toys and games.  Board games were very common in ancient Egypt and people from all levels of society played them.

Archaeologists have discovered a number of board games that were used in ancient Egypt, but no explaining rules how to play the games have survived. So, we have only guesses how the games were played. Some of the ancient Egyptian games were traditional African games, and others were learned from West Asian neighbors.

Ancient Egyptian Game Of Senet And Other Board Games

The Senet that translate to “game of passing” was the most popular game board in ancient Egypt.  The oldest hieroglyph representing a Senet game dates to around 3100 BC. The original rules of the Senet are unknown because no records of the rules have ever been discovered. With help of images found on ancient tomb walls and actual artifacts, some have attempted to reconstruct the rules.

Based on what we know, the game of Senet was played by two people, either on elaborate carved and inlayed boards like the one found in Tutankhamen’s tomb, or simply scratched into the earth. The Senet gameboard is a grid of 30 squares, arranged in three rows of ten. 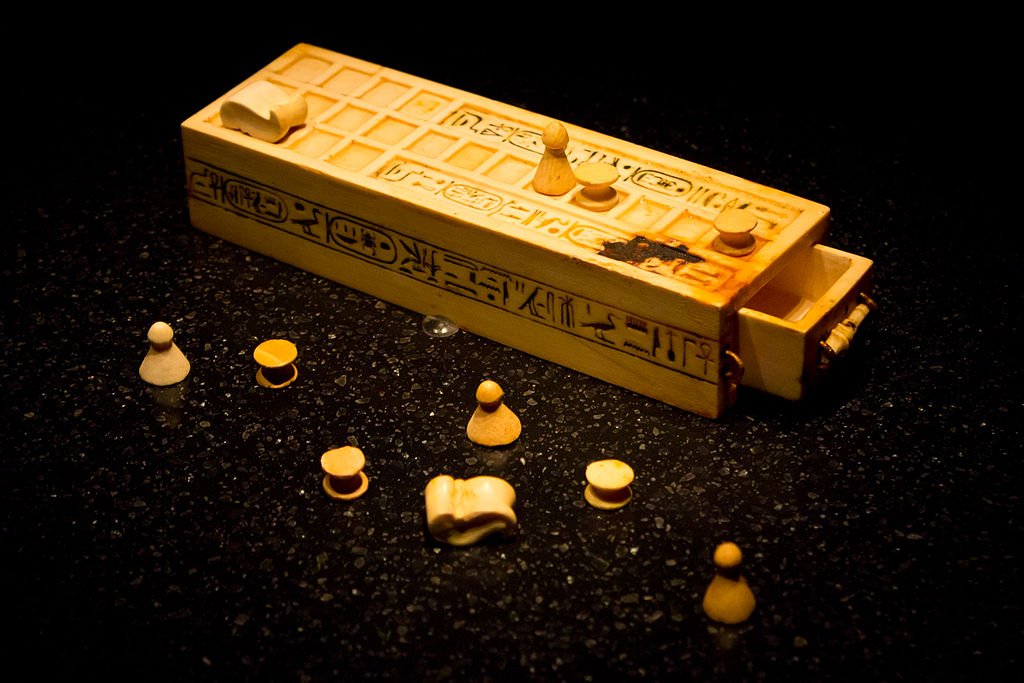 A game box and pieces for playing the game of Senet found within the intact KV62 tomb of king Tutankhamun. This object is today part of the permanent collection of the Cairo Museum of Egypt. This photo was taken at the King Tut exhibition at the Pacific Science Center in Seattle, Washington State, USA. Image credit: Dmitry Denisenkov

Some of the squares had symbols on them and the path of the counters probably followed a reversed S across the board. The symbols represented ether good or bad fortune, and affected the play accordingly. The movement of the counters was decided by throwing four two-sided sticks or, in some cases, knucklebones. Good luck was a blessing from the gods and the winner was the first to pass into the afterlife by getting all their pieces off the board. 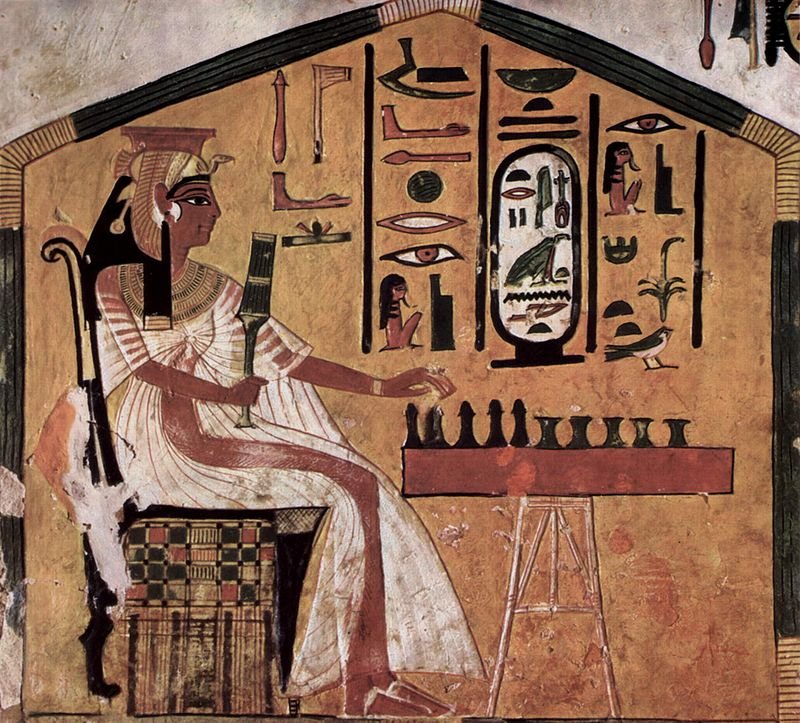 Another board game thought to have come from Asia was twenty squares. Several boards have been discovered, and it is known that the game was played by two players using five pieces, but just as the case with the Senet board game, the rules of this game are now lost. 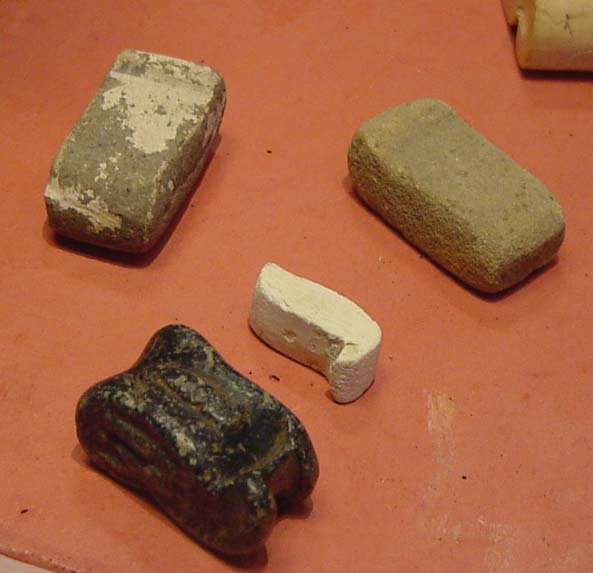 There were several games that could be played by more than two people. In the game of "snake" (mehen), up to six people could play. It used a long field scratched out on the floor and stone pieces int he shape of dogs, lions and balls that were moved along it. In yet another game, pegs with their tops shaped into dogs, jackals and other animals were stuck into a row of 30 to 60 holes drilled into a board. 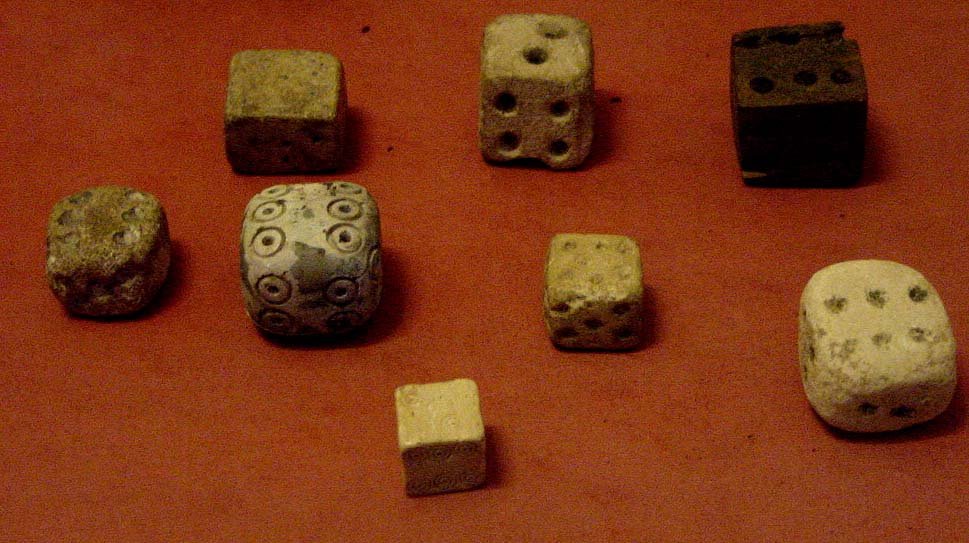 Ancient Egyptian children played different games will balls and dice, but they had also a number of toys and some of them were very complex. Balls were made out of papyrus or leather, with straw stuffing. When horses were introduced to Egypt, horsehair was use for various games, including juggling. 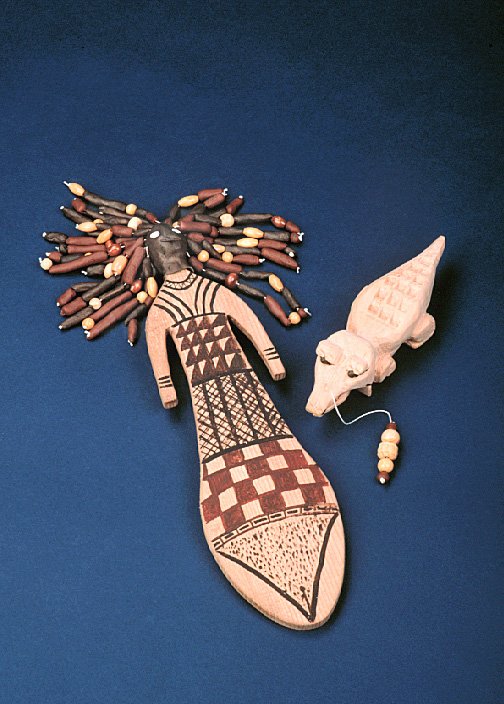 Many fine examples of wooden and clay mechanical string toys have been found in the tombs of Ancient Egypt. The original of this particular wooden crocodile is believed to be from 1100 BCE and is on exhibit at the East Berlin Museum. Some anthropologists believe these "toys" to be funerary objects placed in tombs to protect people in their next lives. The crocodile was a creature feared by many Egyptians and was commonly mummified and used to symbolize the god Sebek. The paddle doll, also from Ancient Egypt, is on display in the British Museum. The doll's hair is of sun-baked clay strung on flax thread. The doll's body is of wood and decorated with fertility motifs common to that era.
There are also many great examples in the Metropolitan Museum in NY. In 1887, the British archaeologist Flinders Petrie discovered an Egyptian doll factory dating to 1800 BCE.

The ancient Egyptian kids had clay rattles and little animals shaped out of clay. If parents could afford, a child could also get wooden toys. Some wooden toys had moving parts, like a hippopotamus with jaws that could open and close.
Many fine examples of wooden and clay mechanical string toys have been found in the tombs of Ancient Egypt and hopefully archaeologists will excavate even more ancient Egyptian games and toys in the near future, so we will be able to learn more about the practices and various kinds of entertainment popular among ancient Egyptians..