When you visit one of the 190,000 temples and shrines or a cemetery in Japan, you can easily find a Jizo statue because they appear in a large number. Jizo statues are often very cute and they take on countless forms. They can be male, female, adult, and child. Most often, Jizo appears as a small monk-like figure.

Jizo - One Of The Most Popular Buddhist Divinities 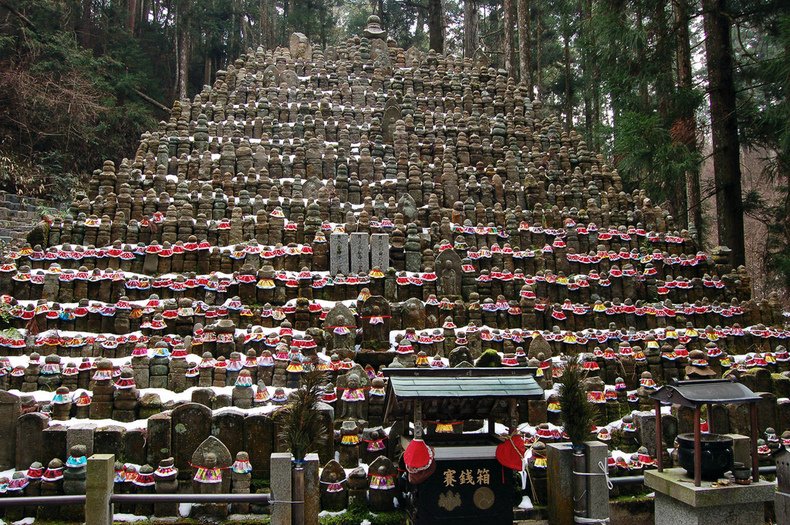 Jizo is the Japanese version of Bodhisattva Ksitigarbha, a Buddhist god worshiped mainly in East Asia. Jizo is, without doubt, one of the most popular and lovable of the Buddhist divinities and he has all the wisdom of the Lord Buddha himself, with this important difference, namely, that Jizo has waived aside Nirvana, and does not sit upon the Golden Lotus, but has become, through an exquisitely beautiful self-sacrifice, the divine playmate and protector of Japanese children. 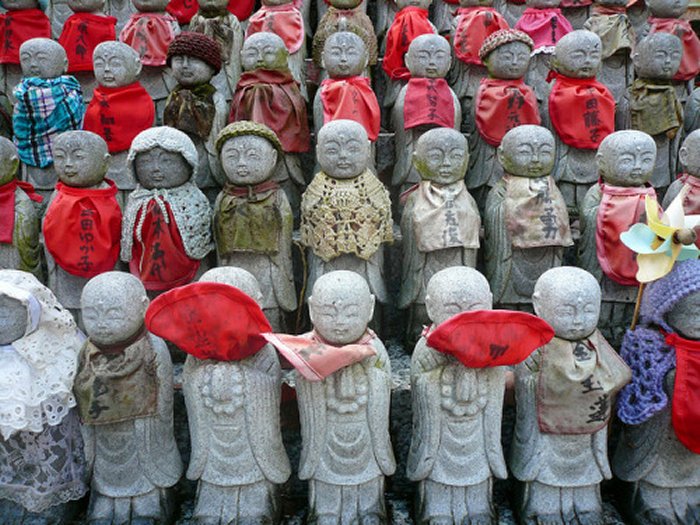 Jizo – Protector Of Children, Travelers, Women And The Weak

Jizo has many functions and duties, but most important of them all is that he acts a protector of children and unborn children who died before their parents. According to Japanese Buddhist stories, children who face judgment in the afterlife are doomed to stack rocks on the riverbed of souls in purgatory because they didn't have a chance to build up good karma on earth. Jizo helps these children to cross the river in the sleeves of his robe. 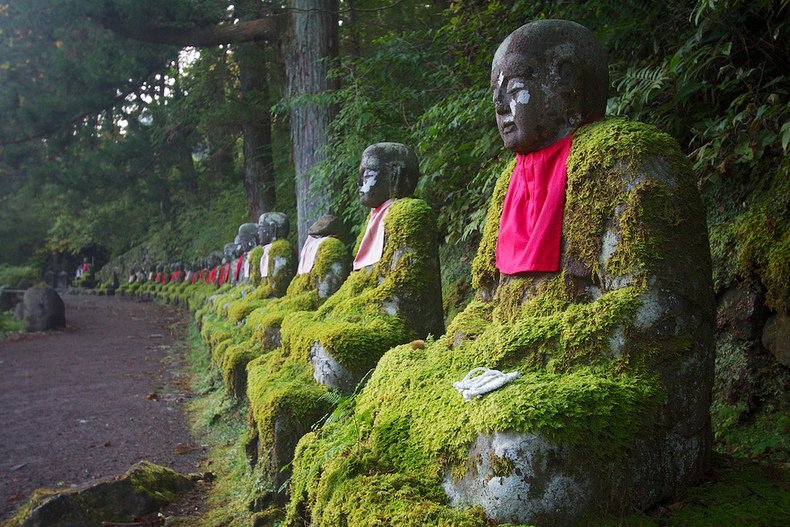 He is the God of smiles and long sleeves, the enemy of evil spirits, and the one being who can heal the wound of a mother who has lost her child in death. Jizo is also the guardian of travelers, women and the weak.

The Visit Of Jizo Is Much Dreaded

There is an intriguing custom that takes place in Izumo, a city in Shimane Prefecture, Japan.

When a wedding takes place in the house of an unpopular man in the country the young men of the village carry a roadside statue of Jizo into the Zashiki and announce the coming of God. 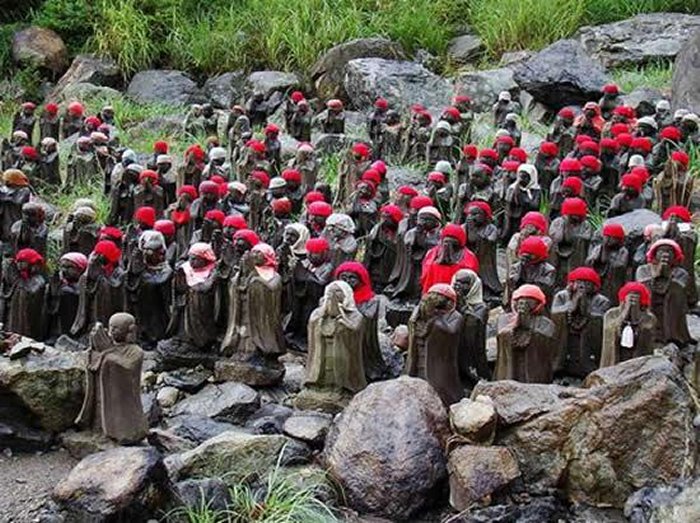 Food and wine are demanded by God. The members of the family must come in, salute the deity, and give all the saké and food demanded while any remains in the house. It is dangerous to refuse; the young peasants would probably wreck the house. After this, the statue is carried back again to its place. The visit of Jizō is much dreaded. It is never made to persons who are liked. 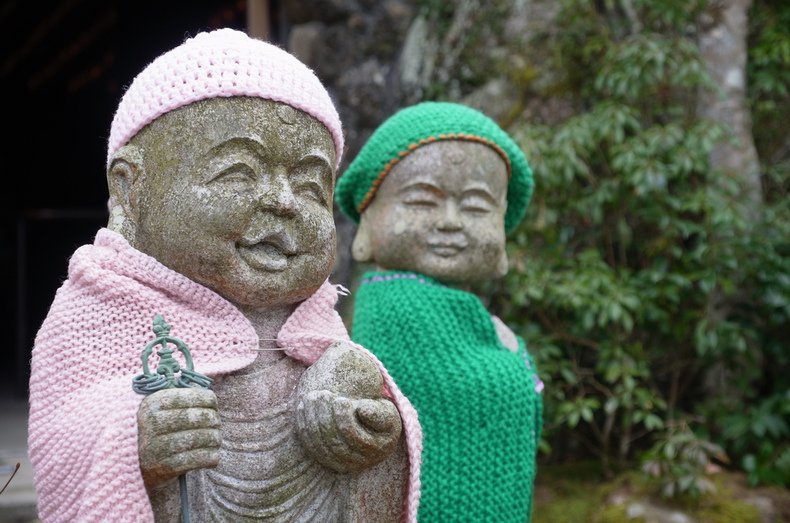 Jizo Statues Can Be Found All Over Japan

Due to his popularity, we can find depictions of Jizo in many places in Japan. Jizo is the first deity most people encounter when they set foot in Japan. This is because he is the protector of travelers.

You can find Jizo peeking out among the grasses along the road, standing at intersections, overseeing borders, or sitting in a wooden shelter built especially for him. Jizo is at temples too, where sometimes he holds a baby in his arms. He is found at boundaries between places both physical and spiritual, between here and there, life and death. 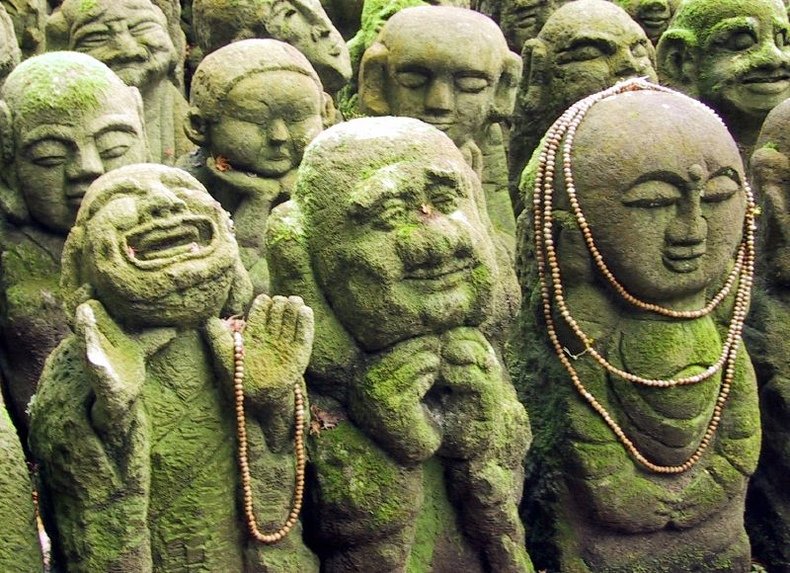 Jizo statues are very often carved out of a rock. According to Hank Glassman, associate professor of East Asian Studies at Haverford College in Pennsylvania and author of “The Face of Jizo: Image and Cult in Medieval Japanese Buddhism” the material of the Jozo statue is important. The power of stones to engage the human heart.” Stone is a material that has been worshipped and used for protection since ancient times. Stones having spiritual value predates Buddhism. 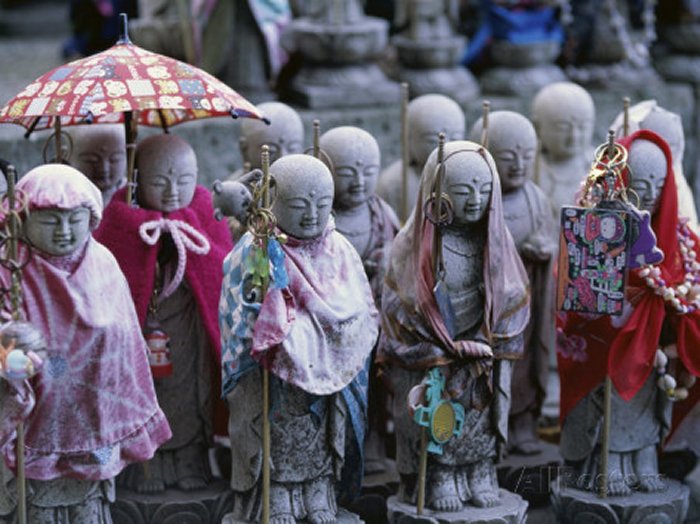 Jizo statues are often dressed in a small red bib around their necks. This practice of dressing Jizo includes hats, robes, or anything one wishes to adorn his figure with. Such red bibs were said to have been worn by children in earlier times. Although the bibs are usually red, a color that represents safety and protection, they can be any color, fabric or pattern. 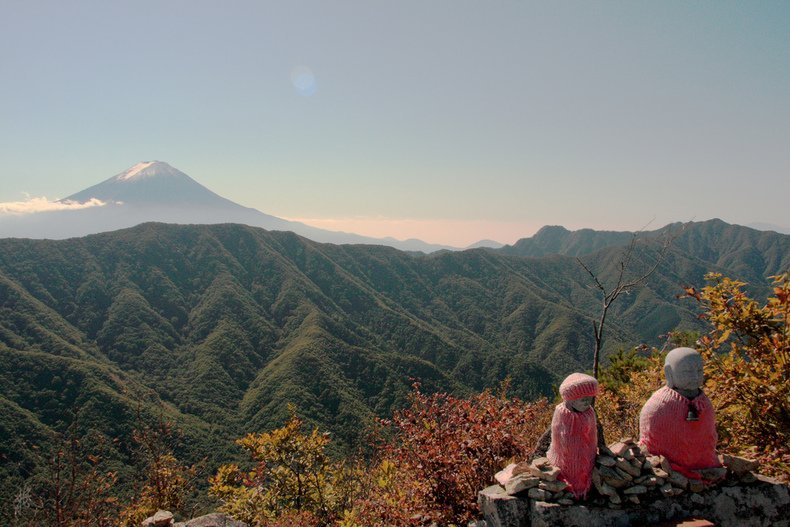 Jizo represents a monk, and when people dress a monk statue, they accrue merit. Dressing Jizo gives people a chance to interact with him.