A. Sutherland - AncientPages.com - Located in the ancient, Pre-Columbian city of Uxmal, Mexico there is an intriguing Mesoamerican step pyramid known as the Pyramid of the Magician. It is the tallest and most visible structure in the ancient city of Uxmal. 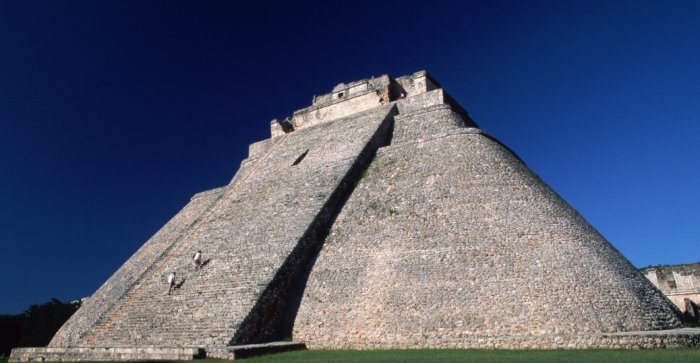 The Pyramid of the Magician, known for its rounded sides, rises 91 feet above the ancient city of Uxmal. Image credit: History.com

In ancient times, Uxmal was one of largest cities on the Yucatán Peninsula. At its height, Uxmal was home to about 25,000 Maya and we find the Pyramid of the Magician at the center of the city.

The city of Uxmal was one of the most noteworthy places, though not as powerful as cities like Tikal. Even today, the ruins display the city's prominent architecture, which unfortunately does  not shed much light on Uxmal's mysterious past.

Despite the existence of oral legends and Mayan chronicles, it’s still unclear when exactly Uxmal was established, how many people lived there, and when it was abandoned.

Legend of the dwarf magician who built the pyramid

The name of pyramid is derived from ancient legends told by the indigenous Mayan people.

According to one legend, a magician-god named Itzamna was single-handedly supposed to have erected the pyramid in one night, using his strength and magic.

There is also another intriguing legend telling that when a certain gong was to sound, the city of Uxmal was destined to fall to a boy “not born of woman”. The gong was struck, one day, by a dwarf that was born unto no mother, but rather hatched from an egg by a childless, old woman (according to a tourist guide in Uxmal, this egg was an iguana egg, and the woman a witch). 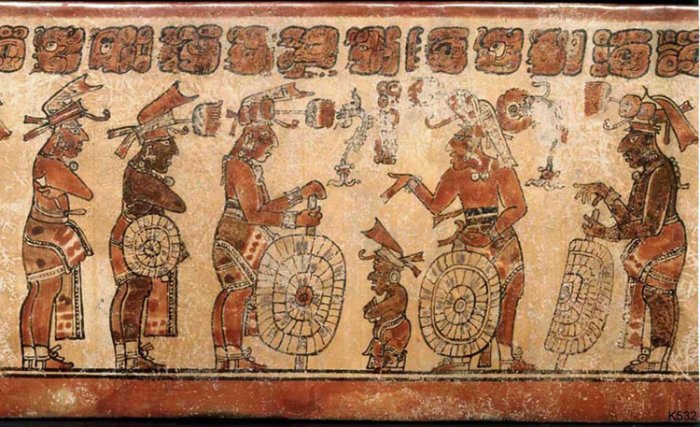 A dwarf depicted on a Classic Maya vase is shown playing a significant role in an apparent discussion or face-off between groups. Image credit: Mexicolore

When the city’s ruler heard the sound of the gong he became very frightened and ordered the execution of the dwarf. After a while the ruler decided the dwarf’s life would be spared if he could perform three seemingly impossible tasks. The dwarf was ordered to build a massive pyramid, taller than any building in the city, in a single night. The dwarf ultimately completed all the tasks, including the construction of the pyramid. The dwarf was hailed as the new ruler of Uxmal and the structure was dedicated to him.

Pyramid of the Magician and its five temples

There are many pyramids scattered across the world, but this particular one is considered unique because of its rounded sides, considerable height, steep slope, and unusual elliptical base. The exact height of the Pyramid of the Magician is in dispute and has been reported as tall as 40 metres (131 feet) and as low as 27.6 metres (90.5 feet).

The accepted median height is 35 metres (115 feet), with the base measuring approximately 69 by 49 metres (227 by 162 feet). Despite the absence of an exact measurement, the pyramid remains the tallest structure at Uxmal. 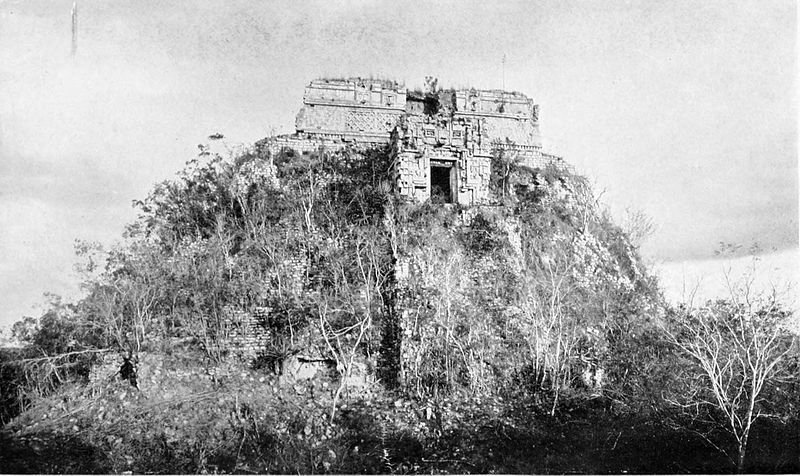 Pyramid of the Magician as it looked in 1913 before it was restored. Image credit: Douglas C. McMurtrie

According to archaeologists and historians the construction of the first pyramid temple began in the 6th century AD and the structure was expanded over the next 400 years.

The pyramid fell into disrepair after 1000 A.D. and was thereafter looted during the Spanish Conquest of Yucatán.

The pyramid, as it stands today, is the result of five nested temples. The oldest structure, Temple I, is exposed on the west side of the structure, at the pyramid’s base. The second temple, Temple II, can be entered through an opening in the upper part of the eastern staircase.

This temple is only partially excavated. Its central chamber is supported by columns and it has a roof comb that is visible through a trench in the floor of Temple V above. Temple III is built onto the rear of Temple II and is not visible from the outside. It consists of a small central shrine and an antechamber. 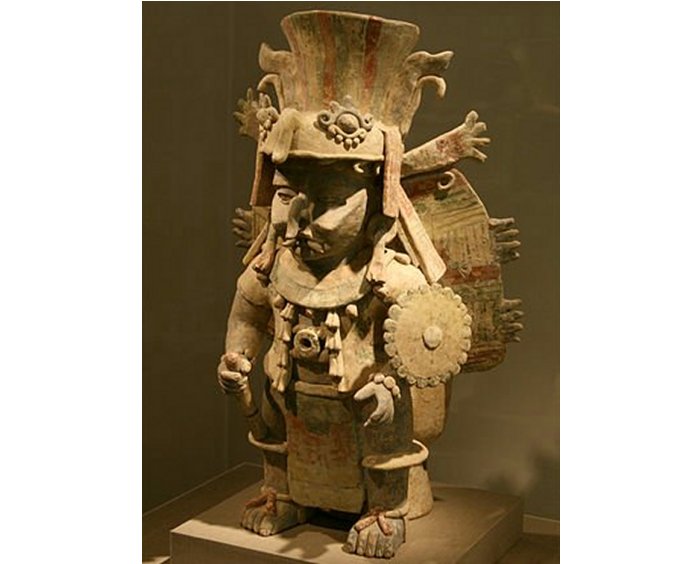 Temple VI has the richest decorations and was constructed in the Chenes style.Chaac is the name of the Maya rain deity. With his lightning axe, Chaac strikes the clouds and produces thunder and rain. Chaac corresponds to Tlaloc among the Aztecs.

Temple V, also known as The House of the Magician or Soothsayer, is the final building phase of the pyramid.

The pyramid is an image of the world

The first detailed account of the rediscovery of the ruins was published by Jean-Frederic Waldeck in 1838. Waldeck’s account of Uxmal inspired John Lloyd Stephens and his illustrator friend, Frederick Catherwood to make two extended visits to the site in 1839-1841, to record and sketch the layout of the complex. From his notes, Stephens published his now famous Incidents of Travel in the Yucatan.

The "Nunnery" in Uxmal, actually a palace complex, stands adjacent to the Pyramid of the Magician. Image credit: Canadian Museum of History

Describing his first view of the ruins, Stephens writes:

"We took another road, and, emerging suddenly from the woods, to my astonishment came at once upon a large open field strewed with mounds of ruins, and vast buildings on terraces, and pyramidal structures, grand and in good preservation, richly ornamented, without a bush to obstruct the view, and in picturesque effect almost equal to the ruins of Thebes... ...The place of which I am now speaking was beyond all doubt once a large, populous, and highly civilized city. Who built it, why it was located away from water or any of those natural advantages which have determined the sites of cities whose histories are known, what led to its abandonment and destruction, no man can tell."

Rise Of League Of Mayapán And The Last Great Maya Capital

“The pyramid is an image of the world; in turn, that image of the world is a projection of human society. If it is true that man invents gods in his own image, it is also true that he sees his own image in the images that the sky and the earth offer him. Man makes human history of the inhuman landscape; nature turns history into cosmogony, the dance of the stars.”

The doorway into the temple on the top aligns with the setting sun on April 12 and August 31.

These are important astronomical dates on the Mayan calendar for tracking the sun's zenith. As so many other ancient structures across the world, the Pyramid of the Magician is also proof of our ancestors’ interest in astronomy and observations of celestial objects.

Harasta J. Uxmal: The History of the Ancient Mayan City

Harasta J. The Most Famous Cities of the Maya