AncientPages.com - A huge ancient Roman building from the 4th century AD which appears to have been a horreum (i.e. a granary) has been discovered during the recent archaeological excavations of the Kovachevsko Kale Fortress near the town of Popovo in Northeast Bulgaria.

The fortress was built between 308 and 324 AD, during the joint reign of Roman Emperors Constantine I the Great (r. 306-337 AD) and Licinius (r. 308-324 AD) who ruled the Roman Empire together as rivaling Augusti under the Tetrarchy system.

The building was at least 60 meters long and at least 25 meters wide even though it has not been fully revealed yet. It had two stories and a basement; it had a massive two-winged door which was 2.4 meters wide.

The walls of the building are 1.3 meters wide, and were reinforced with outer buttresses (counterforts).

The horreum was constructed using the ancient Roman building technique known as opus mixtum which includes the alternating of stone and bricks bound together with strongmortar.
The foundations of the Ancient Roman granary in the Kovachevsko Kale Fortress were discovered at a depth of over 2 meters.

They were made with "concrete" consisting of mortar and crushed stones lying on top of wooden poles stuck deep into the ground.
The space in front of the southern entrance of the building had a portico with a colonnade of eight massive stone columns, while the floor of both the building and the portico was tiled with square bricks of varied size.
Based on its architectural details and a comparative analysis,the archaeologists have concluded that the huge Romanbuilding was a horreum, possibly a government-owned granary.

Based on its architectural details and a comparative analysis, the archaeologists have concluded that the huge Roman building was a horreum, possibly a government-owned granary. Marhis Architectural Studio,

Together with its portico, the horreum found in the Kovachevsko Kale Fortress appears to be the largest in terms of area among all ancient warehouses that have been found inBulgaria.
Archaeological evidence indicates that the Roman granary wasplundered and set on fire around 378 AD when it is known that the fortress was taken and burned down by the Goths during the so called Second Gothic War (378-382 AD) of the Roman Empire, announced Archaeology in Bulgaria. 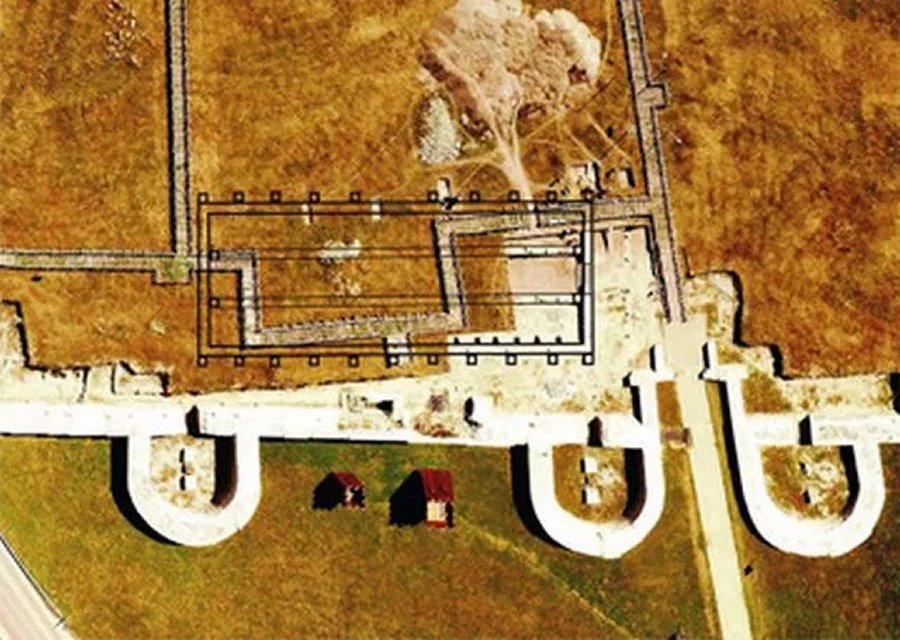 An aerial photo of the ruins of the Kovachevsko Kale Fortress showing the location of the newly found horreum (granary) behind the fortress wall. Photo: Popovo Municipality

The building was partly rebuilt at the end of the 4th century AD but never regained its original function as a horreum. During the two-month archaeological excavations of the Kovachevsko Kale Fortress in the fall of 2015, which were funded by Popovo Municipality, the archaeologists have discovered about 150 copper coins of Roman and Byzantine Emperors from the 4th and 5th century AD as well as over 70 household artifacts.

The digs of the Roman and Byzantine fortress have been led by Assoc. Prof. Dr. Oleg Alexandrov from Veliko Tarnovo University "St. Cyril and St. Methodius" and by Vladimir Stoykov, an archaeologist from Popovo Municipality.

Kovachevsko Kale Fortress is an important historical object, which survived for about 270 years, and it saw devastating barbarian invasions by the Goths, Huns, and Avars.

It's also an extraordinary example of creativity of the ancient architects and engineers who designed and constructed the huge fortification.