Ellen Lloyd - AncientPage.com - A giant mysterious figure, world renowned under the name "Candelabrum" can be seen from as far as 12 miles out to sea.

The Candelabra is 595 feet long and resembles a candlestick. The figure "is drawn" on a slope of the huge sandy mountain located opposite to the island of Kangalyan in a bay Parakas, Peru.

Who made it and why? This is a question no-one has been able to answer so far. Obviously, its creators believed it was important that the ground drawing must be clearly visible from the air.

Separated by 130 miles from the Nazca Plain, with its famed giant figures, the Candelabra apparently is not the work of the Nazca people.

It is puzzling why that such a figure would be placed where it could be seen best by sailors.

The Candelabra's makers, purpose, and symbology are in doubt. The Pisco geoglyph really doesn't match the motifs in our books on South American archeology.

Some archeologists say it is only a trident, but who ever saw a trident like this?

Frank Joseph, the author of several alternative history books like for example Before Atlantis and Advanced Civilizations of Prehistoric America, just to mention a few.

Joseph thinks the Candelabrum looks like a Jimson weed! Furthermore, he states that there is a miniature version of the Candelabra drawn on a rock in California's Cleveland National Forest. Joseph associates the two candelabras in this way: The ancient inhabitants of Peru voyaged to California to collect Jimson weed and other hallucinatory drugs. When they sailed back to Peru with their cargo, they used the Pisco geoglyph as a navigational aid!

That is one hypothesis, but there are also other ideas behind the purpose of creating the Candelabra.

In ancient times was considered that "Candelabrum" was put on a mountain slope with the Spanish monk Ramon Rokhason sent in Peru on the reference. Making the pilgrimage from the city of Lima in Ik, it and his followers reached Parakas where created the huge figure, urged to bear "the ancient message to descendants". Sometimes the figure was called by "Three crosses", but this term is very seldom used by contemporaries.

There was a new version of emergence of mysterious "Candelabrum" of Parakas later. Some historians spoke about a figure as about "the Life Tree", serving as the cult image at the time of the most ancient civilizations to which inhabitants of lands of Pisko-Parakas worshipped. Then there was a large quantity of "sea" versions. 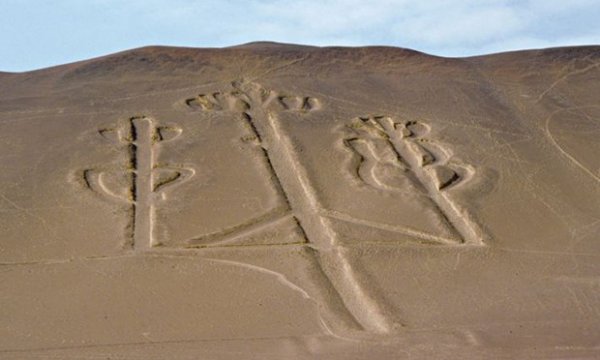 Writer Eduardo Garcia Moreno in the book "Code of pirates" argued that ancient "Candelabrum" was left by the flibustyer plowing the seas and plundering the cities, and in Parakas pirates had a rest and hid from prosecutions.

Some historians and seafarers believed that "Candelabrum" served as a reference point and a precautionary sign for the ships reaching a so-called zone of Bokeron, being considered dangerous because of continuous excitement of the sea. But supporters of such versions let's allow answer, who exactly represented mysterious "Candelabrum" on a slope of the sandy mountain.

Parakas's "candelabrum" is so large-scale phenomenon that it is heavy to imagine the person capable to put the huge image on a slope of the sandy mountain which is going down to water at an angle approximately in fifty degrees. Ditches of this mysterious image have depth in two meters and four-meter width therefore to fill up or blow off Parakas's "Candelabrum" unable even the strongest winds. The height of the central figure of "Candelabrum" makes more than hundred meters.

Disputes on emergence of surprising "Candelabrum" continue messages the most known historians and archeologists of the world, but to solve its secret while it was not possible. Probably, Parakas's "Candelabrum" is simply geometrical image of correct "trident", or an important ritual sign of ancient civilizations.

In any case, this figure is a surprising valuable cultural heritage, which is necessary for preserving and esteeming to give the chance to new generations of scientists to investigate "Candelabrum" and to solve its centuries-old secret.

No-one knows for certain the age of the original carving. However, an expedition by the French writer Robert Charroux in 1969, noted that, although the mountainside was exposed to the wind, the wind contained no dust or sand. Charroux thus concluded that the trident carving could have been drawn millennia ago and yet still have avoided any significant erosion.

The trident symbol at Paracas is a major clue to its origin. According to local legend, this carved trident represents the lightning rod of the god Viracocha, who was worshipped throughout South America.