A. Sutherland - AncientPages.com - In 1952 archaeologists conducting excavations in Israel discovered a layer of fused green glass. The layer was a quarter of an inch thick and covered an area of several hundred square feet. 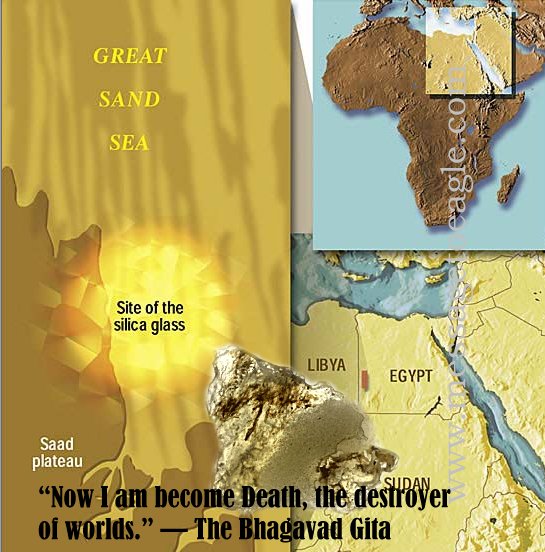 It was made of fused quartz sand with green discoloration, similar in appearance to the layers of vitrified sand left after atomic tests in Nevada in the 1950s.

Five years earlier a thin layer of the same glass was dug up below the Neolithic, Sumerian and Babylonian strata in southern Iraq.

To the south, the western Arabian desert is covered with black rocks that show evidence of having been subjected to intense radiation. These broken and burned stones are called "harras" that are strewn over an area of 7,000 square miles.

"Some single fields are one hundred miles in diameter and occupy an area of six or seven thousand square miles, stone lying next to stone so densely packed that passage through the field is almost impossible. The stones are sharp-edged and scorched black. No volcanic eruption would have cast scorched stones over fields as large as the harras. Neither would the stones from volcanos have been so evenly spread. The absence in most cases of lava ( the stones lie free) also speaks against a volcanic origin for the stones..." Immanuel Velikovsky, "Earth in Upheaval"

A small piece of unusual yellow-green glass carved into the shape of a beautiful scarab beetle is a part of the famous pectoral of Tutankhamun and can be seen in Cairo Museum, Egypt.

The jewel was tested and found to be glass, but surprisingly it is older than the earliest Egyptian civilization.

The glass, known as Libyan Desert Silica Glass, covers a large area measuring about 30 miles east and west by 80 miles north and south and is located on the Libyan-Egyptian border.

It is 28.5 million years old and shows a grade of transparency and purity (99 percent) that is not typical in the fusions of fallen meteorites. 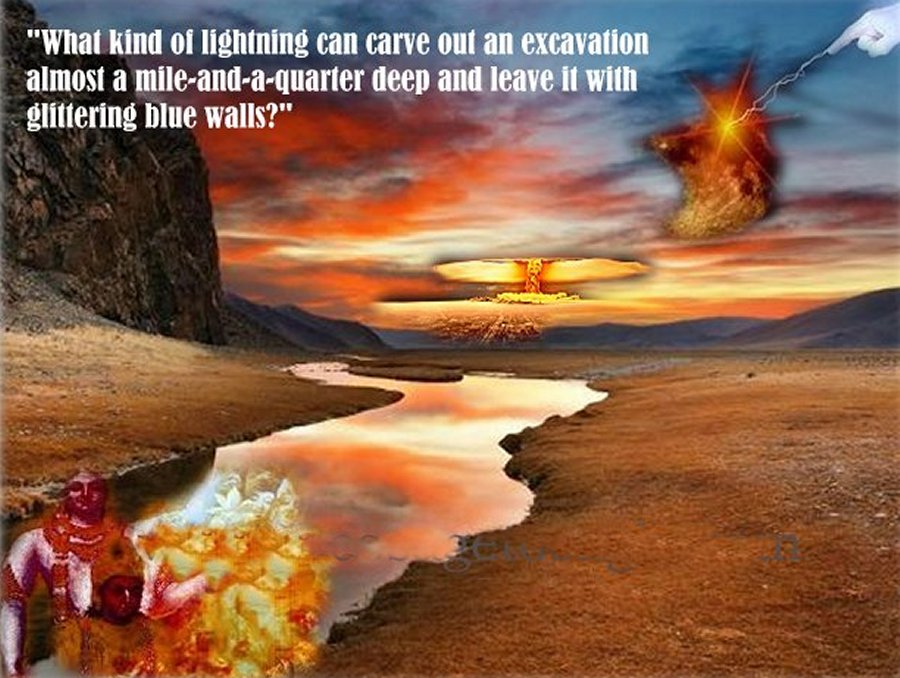 An extend area of strange, glassy stretches of fused silica have also been found in the most desolate areas of the Gobi Desert in Mongolia. Especially interesting are the layers discovered at Lop Nor in Sinkiang, in the vicinity of the present Chinese atomic site.

The results obtained from examined radioactive surface in the area indicate that layers of fused silica does not originate from the modern nuclear detonations but had been there long before China became a nuclear power.

This would mean that Gobi's fused silica comes from the very distant past.

In 1908-09, ancient ruins of the city of Khara Khoto town were unearthed, in the Tangut province, located about 300 kilometers from the famous Silk Highway. Working in one of the excavation sites, Piotr K. Kozlov, the Russian archaeologist dug up a sarcophagus with two well-preserved bodies of an unknown king and queen.

According to his estimations, the sarcophagus was buried about 12000 BC. In another excavation of the same ruins, Professor Kozlov unearthed a large bottomless pit at the depth of 1800 meters. Its vitrified melted walls looked like glittering blue glass.

"Some phenomenon unknown to us must have melted the very stone and left the shiny glazed walls. Local tradition speaks of lightning bolts crashing down from the heavens and hollowing out this excavation.
But what kind of lightning can carve out an excavation almost a mile-and-a-quarter deep and leave it with glittering blue walls?" Hartwig Hausdorf, "The Chinese Roswell"

The fused glass that can be found in many places around the world has a long history and provides physical evidence that atomic explosions were a part of Earth's history in the past.