A. Sutherland - AncientPages.com - Now, it’s time to take a look at the next architectural wonder of India – the cave temples of Ajanta – that represent a symbol of the unexplained sophisticated technology of the ancient builders of India. 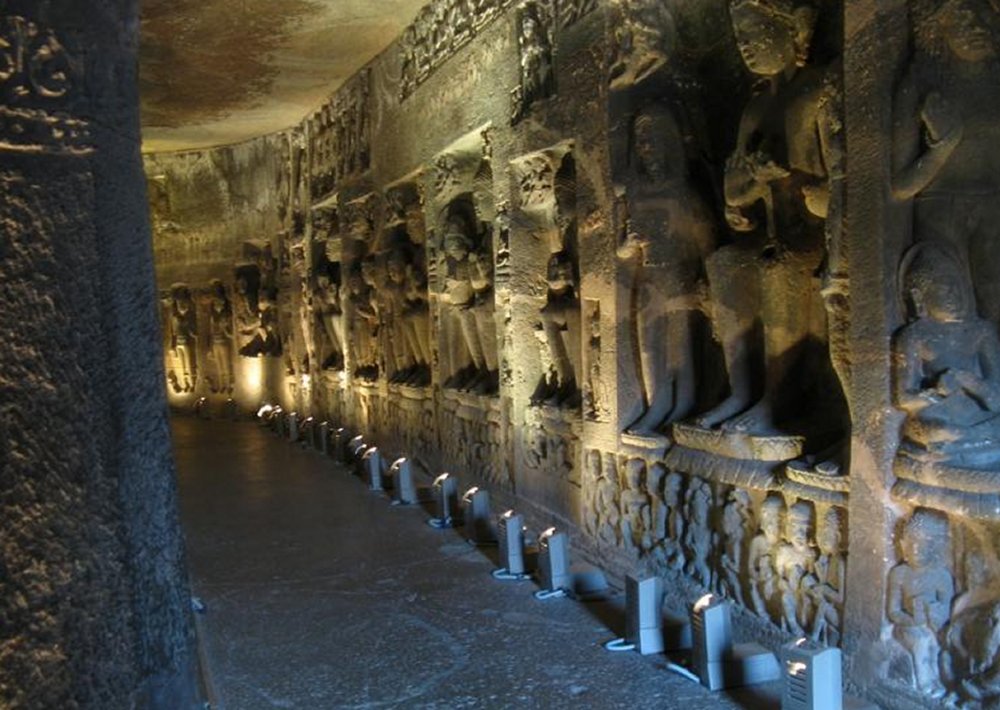 The most famous from the monastery caverns in Ajanta, “cave 1”. The actual entry towards the antechamber is actually outfitted through decals associated with 2 excellent bodhisattvas.

Several of India’s cave temples are very famous, like for example Ellora – the largest single rock-cut temple, we described in our previous article. 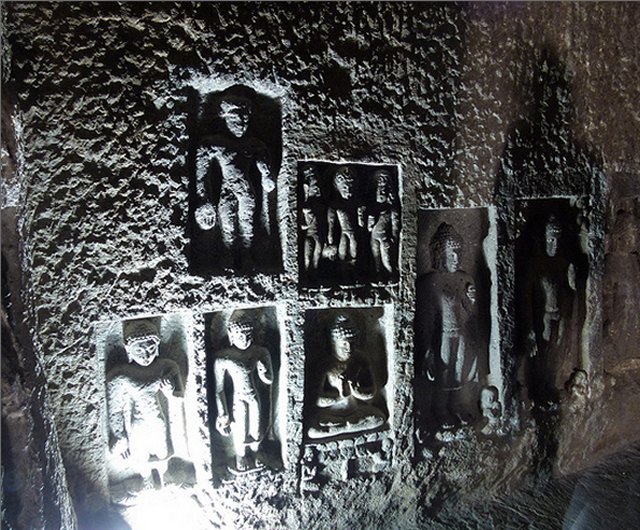 Hewn out of the horseshoe-shaped stone cliffs surrounding the River Waghora, the Ajanta Caves consist of several viharas (monastic halls of residence) and five chaityas, which are basically prayer halls. Other caves (called Viharas) are monasteries with residents. Early  Buddhist caves include caves 8,9,10,12, 13, and cave 15, which is a more complete monastery measuring 19.62 × 15.98 m.

The cave consists of an eight-celled hall ending in a sanctum, an antechamber, and a verandah with pillars. The reliefs in this cave depict the Buddha. The caves are located in the western Indian state of Maharashtra, just 55 km from Jalgaon city and only 105 km from the famous Ellora Caves, in Aurangabad City. The caves were first discovered in 1819, by an Army Officer in the Madras Regiment of the British Army during one of his hunting expeditions. 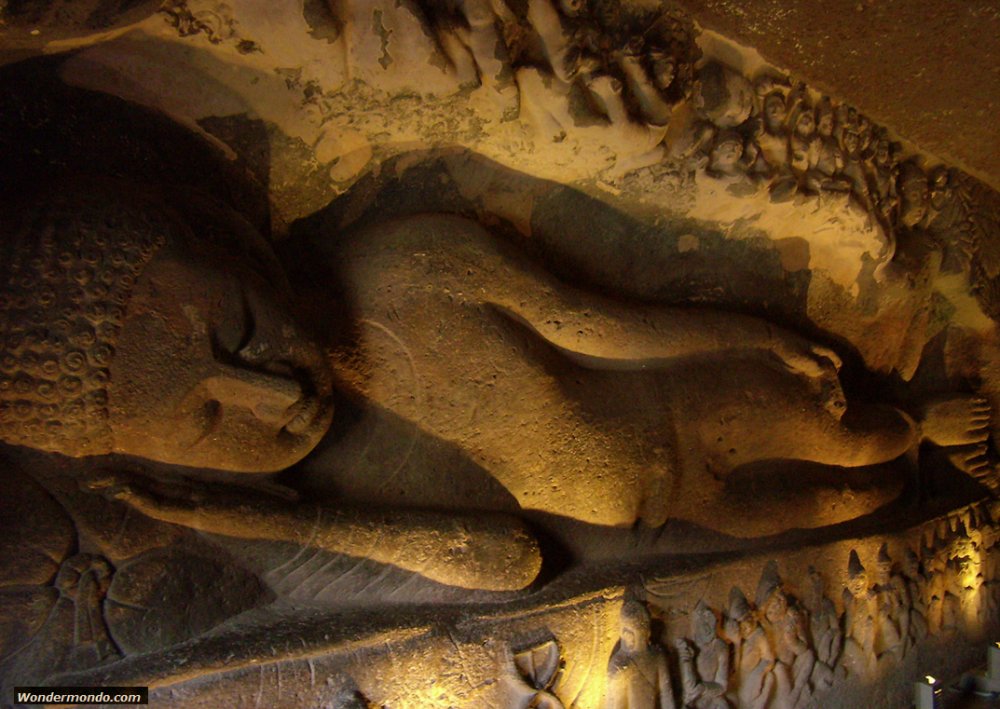 At the end of his reign, these caves were abandoned.

By 480 AD the caves at Ajanta were abandoned and during the next 1300 years, the jungle grew back.
Hidden, unvisited, and undisturbed until 1819, the rock-cut temples were accidentally rediscovered by a British Army officer, John Smith, who is believed to have been in the group of the first recorded visitors to the caves. 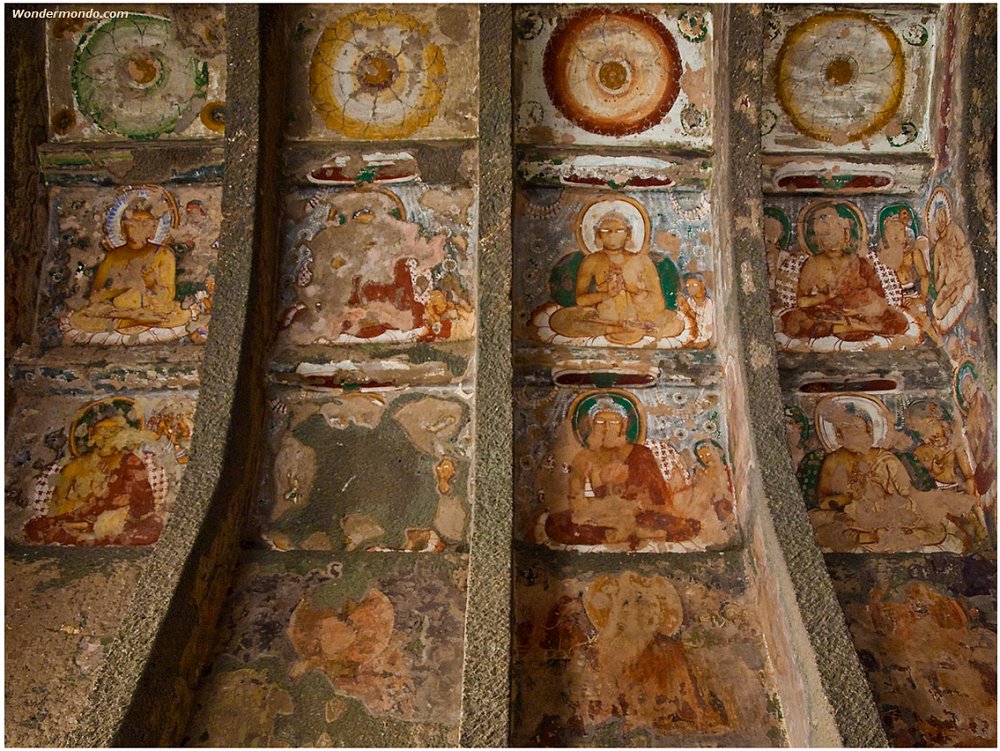 The temples were sculptured by Hindus, Jains, and Buddhists, and according to standard textbook opinion, their age is that the earliest were carved around 300 BC but most in the period of the 4th to the 9th centuries CE.

Some of India’s cave temples have been incorporated into Jain and Hindu temples which are built on top of or around them and have often been restyled, so they have lost much of their original appearance.

The Ajanta Caves were probably sponsored by the Vakataka Dynasty rulers in a period when both the Buddha and the Hindu gods were simultaneously worshiped in Indian culture, which can be attested by inscriptions in which these rulers, who are otherwise known as Hindu devotees, made Buddhist dedications to the caves. According to Spink,

'That one could worship both the Buddha and the Hindu gods may well account for Varahadeva's participation here, just as it can explain why the emperor Harisena himself could sponsor the remarkable Cave 1, even though most scholars agree that he was certainly a Hindu, like earlier Vakataka kings. 1 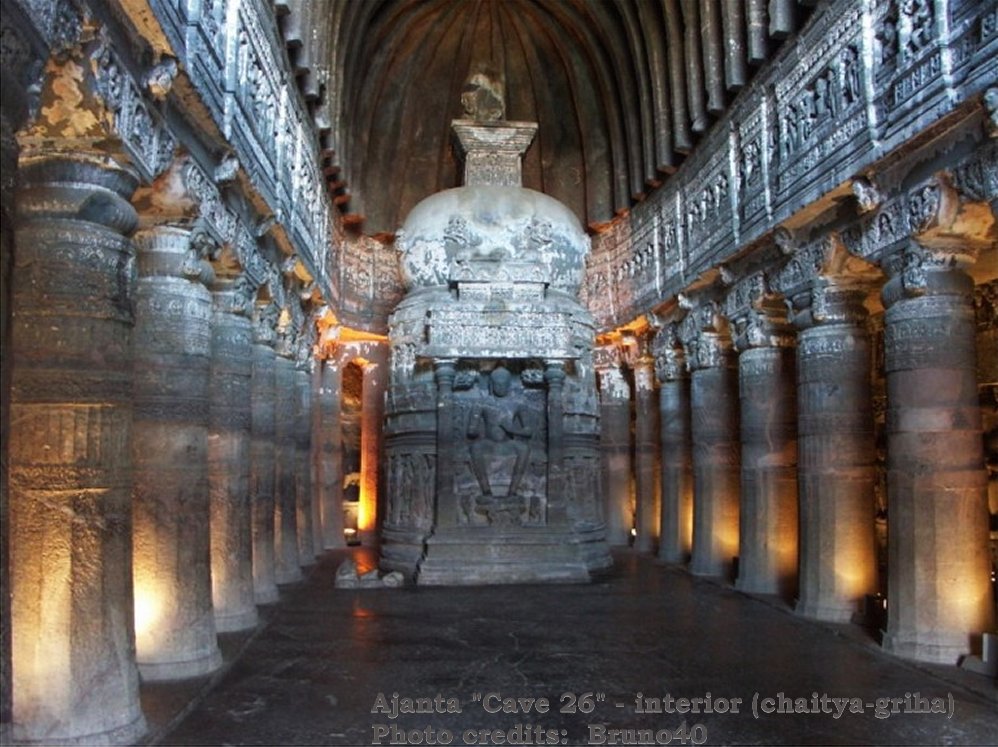 Moreover, these priceless historical monuments are still very controversial regarding not only their origin but also their creators. Even the sacred symbolism, which should be an extremely strong link connecting them all, has been debased. 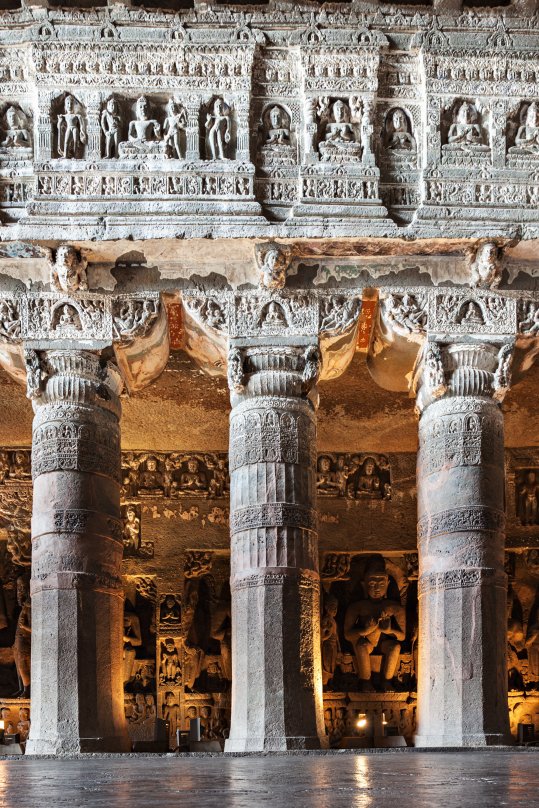 India’s cave temples – originally carved by Hindus – could not maintain their true origin because they were more or less extensively restyled resculptured, plastered, and painted) at a later date by Buddhists.

Still, Ajanta’s paintings and their infinite charm represent an extraordinary art because they belong to a period that was ancient and to a land that was Eastern rather than Western. Incidentally, they contain scenes of semi-mythological history, the royal court, and the popular life of ancient times, as told in romances and plays. Some pictures recall the Greek and Roman compositions and proportions, few late resemble Chinese manners to some extent.

But the majority belongs to a phase, which is purely Indian.