Ellen Lloyd - AncientPages.com - The remarkable megalithic Mzoura stone circle is very difficult to locate and there is little information that could cast some light over its true origins and purpose.

The stones are said to have been brought by giants in very ancient times. Recognized as the world’s largest stone ellipse the stone circle of Mzoura simply refuses to give up its secrets. 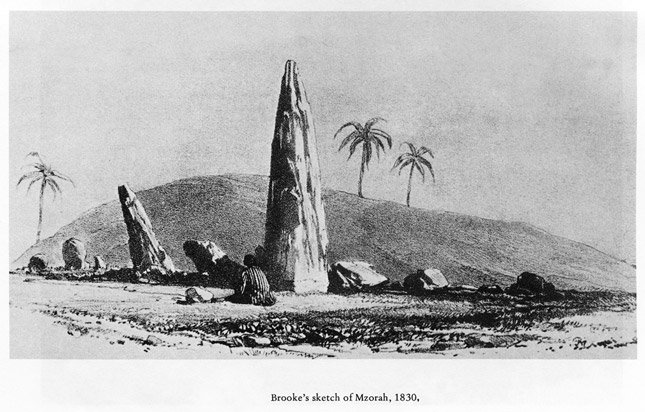 “They are mystical stones, and of medicinal virtue. The giants of old brought them from the farthest coasts of Africa, and placed them in Ireland, while they inhabited that country.” (Geoffrey of Monmouth, The British History of, translated from the Latin by A. Thompson and J. A. Giles, James Bohn, London, 1842).

The stone circle has been so hard to find that author and researcher Robert Temple wrote in his book Egyptian Dawn that “it has always been extraordinarily difficult to find Mezorah. Maps are of limited use. No road approaches the site nearer than several miles’ distance.”
This enigmatic stone ring is situated roughly 11 km from the nearest town of Asilah and about 27km from the ruins of ancient Lixus, Morocco.

In his book Egyptian Dawn, Robert Temple explains that the site itself is a Neolithic ellipse of 168 surviving stones of the 175 originally believed to have existed. The tallest of these stones is over 5m in height. The ellipse has a major axis of 59.29 meters and a minor axis of 56.18 meters.

Was the stone circle an ancient tomb of a giant?

Mzoura is largely absent from the historical record, but Life of Sertorius, Plutarch referred to what appears to be the mysterious stone circle in Morocco.

He wrote that Roman General Quintus Sertorius was told by local inhabitants about a site they knew as the tomb of the giant Antaeus who had been killed by Hercules.

According to mythology, the giant Antaeus was a son of Poseidon and Ge. The Greek word antaios which lies behind his name means “set-against” or “hostile.”

Antaneus was a wrestler in Libya, whose strength was invincible so long as he remained in contact with his mother earth. The strangers who came to his country were compelled to wrestle with him; the conquered were slain, and out of their skulls he built a house to Poseidon. Hercules discovered the source of his strength, lifted him up from the earth, and crushed him in the air.

There are many other ancient accounts that place the tomb of Antaeus in close proximity to both Lixus and Tangier and it is quite plausible that Mzora is the inspiration behind these stories.

Ancient records tell that the tomb of Antaeus which formed a moderate hill in the shape of a man stretched out at full length was shewn near the town of Tingis in Mauretania down to a late period. It was believed that whenever a portion of the earth covering it was taken away, it rained until the hole was filled up again.

According to Plutarch, Sertorius is said to have opened the grave, but when he found the skeleton of sixty cubits in length, he was struck with horror and had it covered again immediately

At the center of the Mzoura stone ring is a large tumulus. Was this the tomb of the giant Antaeus?

Unfortunately, today not much remains of the tumulus, the bulk of the damage to it seems to have been done by excavations undertaken in 1935-6 by César Luis de Montalban. It was he who cut across the mound in two intersecting trenches leaving the distinctive ‘X’ shaped scar visible today.

The site has never been properly investigated. In the 1970s by James Watt Mavor, Junior of the Woods Hole Oceanographic Institute in Massachusetts, USA conducted the one and only professional survey of this site. The study revealed that there was a connection between the Mzoura site and other megalithic sites in Britain.

According to Graham Salisbury who succeeded in locating the Mzoura stone ring on Google Earth, “Mzoura, incredibly, appears to have been constructed either by the same culture that erected the megalithic sites in France, Britain, and Ireland or by one that was intimately connected with them.

The ellipse is constructed using a Pythagorean right-angled triangle of the ratio 12, 35, 37. This same technique was used in the construction of British stone ellipses of which 30 good examples survive including the Sands of Forvie and Daviot rings.”

It should be added that Mzoura is not the only stone circle in Africa to share its construction methodology with British sites. The Nabta Playa stone ring in Southern Egypt conforms to Alexander Thom’s ‘Type I egg’ geometry. For the moment the Mzoura stone circle is unmanaged, exposed, and vulnerable, so this monument surely deserves better protection and further study.

Few people are aware of the fact that Mzoura is the largest megalithic construction in North Africa. Although we do not know why the site was built, researchers suspect the stone circle was designed for religious and astronomical purposes.

The design of the Mzoura circle indicates its builders had superior knowledge of sophisticated mathematics. The builders possessed knowledge of the Pythagorean theorem, two hundred years before it was officially invented by the ancient Greek mathematician Pythagoras.

As long as the site is not properly investigated, it is not possible to offer anything but speculations about the stone circles' purpose or its unknown builders. Also, we do not know if it contains the tomb of Antaeus, as Plutarch told. The true story of the Mzoura stone circle remains yet to be told.