Ellen Lloyd - AncientPages.com - This time our quest for the hidden history of mankind takes us to Peru where we encounter an enigmatic inscription that offers evidence Sumerians crossed the ocean thousands of years ago and left traces of their civilization.

On the site of Pokotia that is located about 2 km from the city of stone Tiahuanaco, there is a monolith that was discovered around 1960. The Pokotia monolith is not very high. It measures only 170 cm, but it is intriguing nevertheless.

In 2002, several researchers who analyzed the monolith and discovered the stone had inscriptions on the front and on the back. 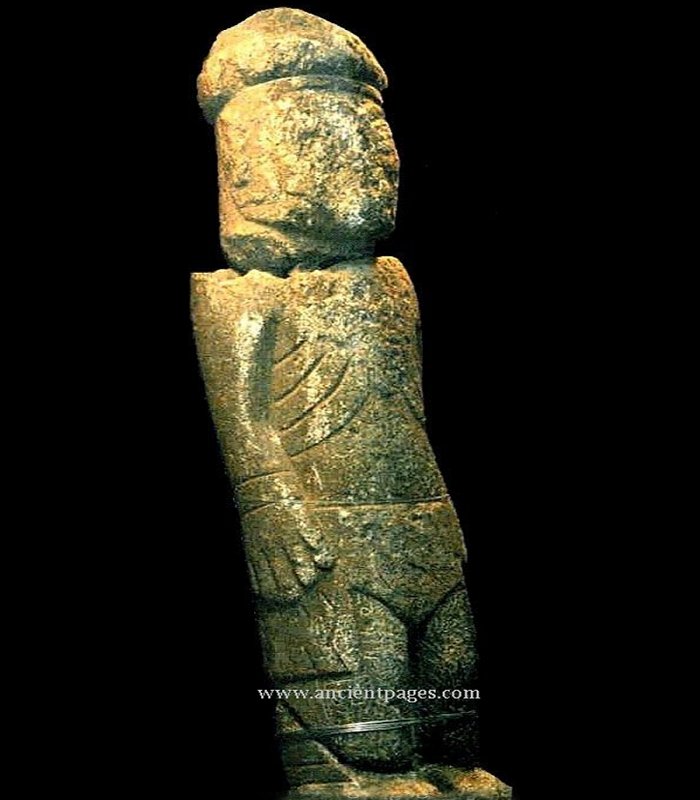 It has been suggested that the monolith Pokotia may have been carved in a period prior to the flourishing of civilization Pukara. According to the official linguistic term, Pukara comes from Quechua and means fortress or strategic place from where you can control a valley or the confluence of two rivers.

The place where the Pokotia monolith was discovered has been identified by some researchers as a sacred site or an oracle.

The inscription under the hand on the Pokotia figure is very interesting:

"The oracle Putaki conducts man to truth. (This) esteemed (and) precious oracle to sprout esteem, (now) witness (its) escape".
The Decipherment of the back inscription of Putaki is below. The writing on the back is written in Proto-Sumerian. The language used to read the inscriptions was Sumerian. 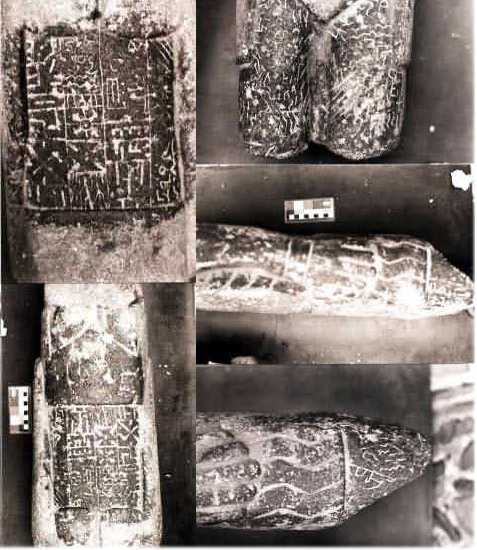 "Proclaim the establishment of character. The strong father (Putaki) to send forth the divination. Strong wisdom (in this) phenomenal area of the deity's power. Capture the speech (of the oracle). (The oracle is ) very strong to benefit (and) nourish the sprouting (of) character. Tell human being(s) (the oracle's) benefit. The oracle to open (up) much (benefit for all)."

"The ideal norm (is the) oracle (of Putaki). (This) oracle is (in) a phenomenal area of the deity's power". Distribute to all humanity (the divine decree). Snare a portion (of the) pure voice. (The oracle to) send forth gladness. Agitate the mouth (of the oracle), to send forth the divination. The diviner speaks good."

"The ideal norm (is this) oracle. (This) oracle (gives) divine decree. Distribute to all humanity (the divine decree). Snare a portion (of the) pure voice. (The oracle to) send forth gladness. Agitate the mouth (of the oracle), to send forth the divination. The diviner speaks good."

"The divine decree to become visible and glisten (from the oracle's own) mouth. Open up the divination. Agitate the oracle (to) send forth (now) wisdom and character. Open (the oracle) to distribute the divine decree (for all it is) lawful and righteous Good. Send forth the sustenance of the pure oracle. Stand upright (Oh oracle) to appear as a witness speaking purity. The oracle (of Putaki) to open (up and) send forth gladness and character".

"The inscriptions on the back of the Pokotia statue define the role of the Putaki oracle in the community. It would appear that the people should recognize this oracle as a source of "truth" and glad tidings. Its additional role was to establish rigtheousness, wisdom and good character for the members of the community who might use this oracle to communicate with the gods.

Throughout this inscription, the Putaki oracle is called the "father". For example, in column 1, it was written that: "Proclaim the establishment of chracter.

The strong father (Putaki) to send forth the divination". And, in column 4, we discover that [Putaki is] the father of wisdom (and) benefit (for all).

This suggest that Putaki was recognized as the great ancestor of other oracles in the region.

This suggest that offspring of this oracle was probably situated in other parts of Peru-Bolivia, where the people went to divine the future, communicate with the gods or ancestors, or simply obtain blessing and glad tidings from the oracle, "Winters said.

Based on these inscriptions Winters, concluded that the monolith of Pokot was an oracle whose name was Putaki. Since the inscriptions are of proto-Sumerian origin it means Sumerians crossed the oceans and visited Peru in ancient times.