Ellen Lloyd - AncientPages.com - In the Bible, there are many references to the giants Nephilim who were offspring of the "sons of God" and the "daughters of men" before the Great Flood.

There are also a number of stories dealing with the Rephaim, another group of giants described as "a mighty people with tall stature who lived in Canaan." 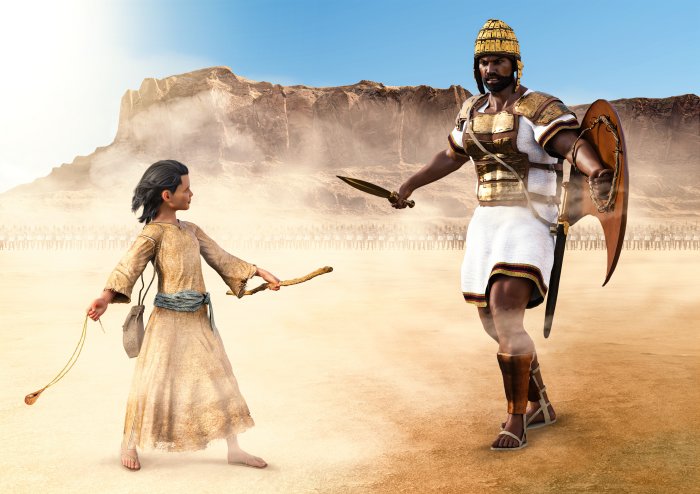 Another mysterious race that is mentioned in the Bible is the little-known Didanum people, sometimes also called the Ditanu or Tidanu. The Didanum people were ancestors of the Nephilim and Rephaim.

Before we attempt to unravel the mystery of the enigmatic Didanum people, it is important to understand the story behind the Nephilim and Rephaim. How far back in the distant past can we trace the giants? The Bible tells us several interesting things:

6:1 And it came to pass when men began to multiply on the face of the ground, and daughters were born unto them, 6:2 that the sons of God saw the daughters of men that they were fair; and they took them wives of all that they chose. 6:3 And Jehovah said, My spirit shall not strive with man forever, for that he also is flesh: yet shall his days be a hundred and twenty years. 6:4 The Nephilim were in the earth in those days, and also after that, when the sons of God came unto the daughters of men, and they bare children to them: the same were the mighty men that were of old, the men of renown..."

We are informed that giants, the Nephilim, the "fallen ones", existed in the antediluvian world as well as after the Great Flood. The earliest accounts of giants occur in times before Adam.

In those days, a group of celestial beings descended from heaven.

Who those celestial beings were is a matter of opinion. Some alternative ancient researchers think these divine scientists manipulated the genes of various kinds of animal life and as a result, they genetically engineered a race of humanoids of gigantic stature.

These were the first giants, the pre-Adamites.

According to the Bible, those who descended to Earth and mated with the women of Earth were the "fallen angels", (the Watchers), a group of 200 high-ranked divine beings.

The giants referred to in Genesis are thus the result of interbreeding between humans and fallen angels.
The Nephilim procreated not only among themselves but created also offspring with the homo sapiens. The offspring of the Nephilim were giants known as the "Gibborim", "heroes of old, men of renown", which are mentioned in Genesis 6. The Gibborim were not as tall and powerful as the Nephilim, but they were nevertheless a dangerous warrior race. 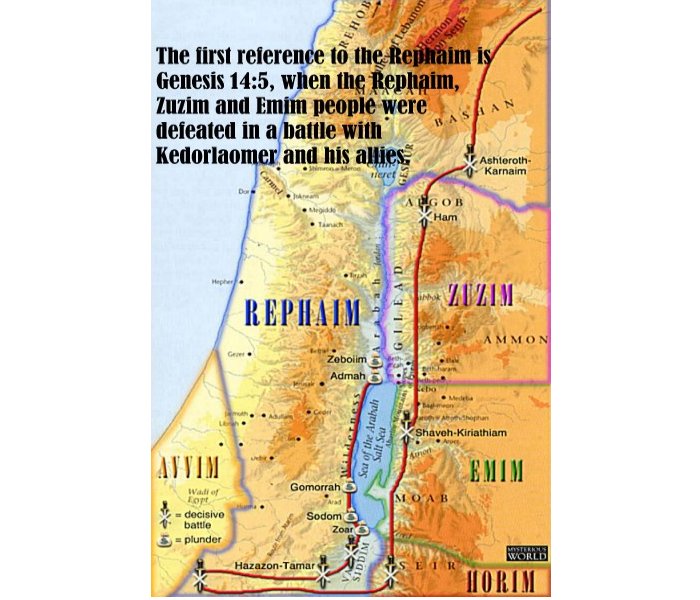 What we know about the Rephaim comes from Biblical, Ugaritic, and Phoenician sources. The Hebrew word Rephaim has two different meanings. Sometimes it is a reference to departed spirits whose dwelling place was Sheol and on other occasions, the meaning of Rephaim is "a mighty people with tall stature who lived in Canaan."

The first reference to the Rephaim is Genesis 14:5 when the Rephaim, Zuzim, and Emim people were defeated in a battle with Kedorlaomer and his allies.

When the Israelites first approached the Promised Land after the Exodus from Egypt, they were afraid to enter the land because it was filled with "giants", the sons of Anak. Giants were widely scattered through Canaan but were known by different local names, including Rephaim, Zuzim, Emim, and Anakim. In Deuteronomy 2:20-21 it is written that the Rephaim were strong and tall, like the Anakites. Og, king of Bashan, was described as the last of the Rephaim in his land (Deuteronomy 3:11), and his bed was thirteen feet long and six feet wide.

The Didanum people were a pre-Adamic race and these beings were closely related to both the Nephilim and Rephaim. They flourished in what is today known as North-East Syria, long before the rise of a dynasty at Ugarit. In the Legend of Keret, also known as the Epic of King Keret, an ancient Ugaritic epic poem, dated to Late Bronze Age, circa 1500 - 1200 BC. reveals the importance of the Didanum people when they are summed to the council.

"The written record of the sacred celebration in honor of the Shades (zlm). You are summoned, O Rephaim (rp'm) of the netherworld, you are summoned, O council of the Didanites (ddn)! Invoked is Ulkan, the Rapha. Invoked is Taruman, the Rapha. Invoked is Sidan and Radan, invoked is Thar, the eternal one. You are invoked, most ancient Rephaim! You are all summoned, O council of the Didanites. Invoked is Ammithtamru, the king, and invoked as well is Niqmad the king. O throne of Niqmad, may you be mourned! And lamented be his footstool. Let the table of the king be mourned in his presence. But let their tears be swallowed, and their dreadful lamentations. Go down, O Shapsh, go down, O great luminary. May Shapsh shine upon him. After your lord from the throne, after your lord to the netherworld descend! To the netherworld descend and go down low into the earth. Down to Sidan-and-Radan, down to the eternal one Thar, down to the ancient Rephaim, down to Ammithtamru the king, and also down to Niqmad the king. One, make an offering, two, and make an offering, three, and make an offering, four, and make an offering....Hail, Ammurapi! And hail to his household! Hail, Tharyelli! Hail to her household! Hail, Ugarit! Hail to her gates!" (KTU 1.161, 1-34).." 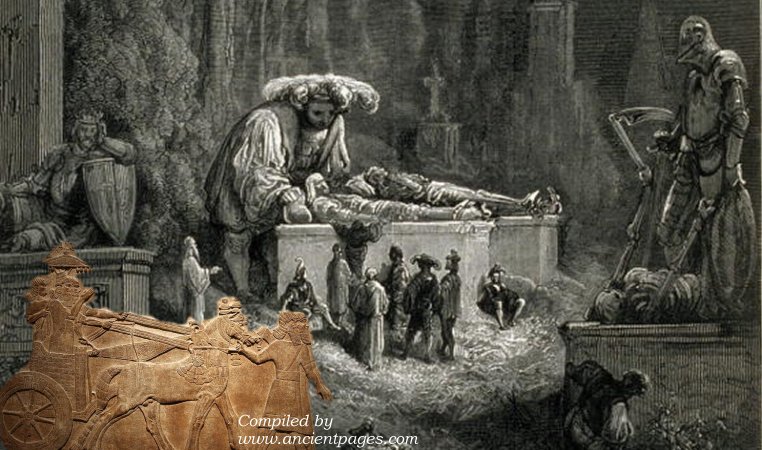 This text is of crucial importance in shedding light on the historical memory behind the Rephaim viewed by the Canaanite kings as their ancestors. The text describes how King Keret, who is a descendent of the Didanites and a ruler of the region around the mountain of the Amorites and the Tidanum Mountain is visited by the God El, widely regarded as the father of all gods. El blesses King Keret and prophesies that his family will be restored. The Didanum people were highly significant as their presence was required during the accession of the Kings.

The Didanumn people are also mentioned in Sumerian texts. They were enemies of the goddess Inanna.

The true origin of the Didanum people is still shrouded in mystery. The Canaanite text equates them with the Rephaim. Other sources refer to these giant beings as a separate race not in any way related to other giants. Based on what we know so far, we can conclude that the Didanum people were very important, pre-Adamic giants who had a lot of influence and power in this region of the world.

What happened to them? Were they wiped out by a natural catastrophe of some kind?

Were they defeated by another group of giants? We may never be able to answer these questions, but there is no doubt the identity of the Didanum people remains an intriguing ancient mystery.