AncientPages.com - It is almost wrong to refer to this engineering masterpiece as ancient or primitive. The first known cybernetic machine was invented already 1,700 years ago.

The device comes from the land of many remarkable inventions, namely ancient China. Although the object was called "south-pointing carriage", it had no had no connection with a magnetic compass. 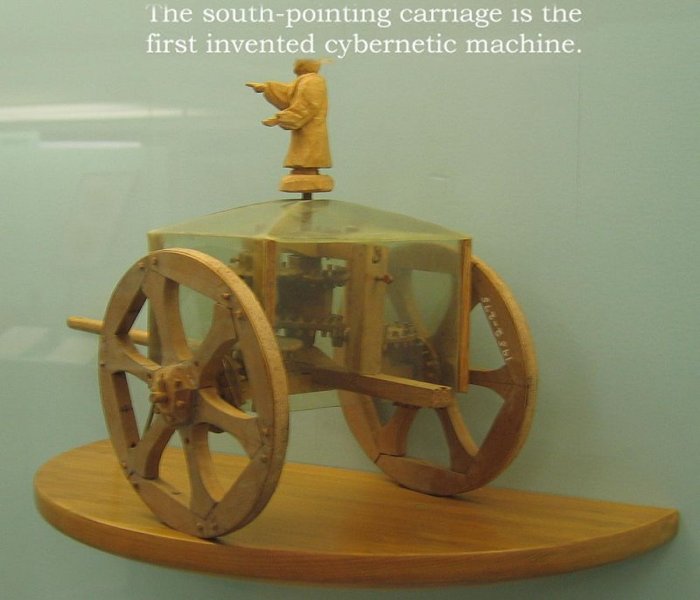 Exhibit in the Science Museum in London, England. This conjectural model chariot incorporates a differential gear. Image via wikipedia

In the very interesting book The Genius of China: 3,000 Years of Science, Discovery, and Invention, author and researcher Robert Temple describes the device as a "large carriage, 3.3 metres long, 3.3 metres deep, and 2.75 metres wide, surmounted by a jade statue of an "immortal" a sage who had achieved immortality.

The figure's arm was raised, pointing ahead, and it always faced towards the south, no matter which way the carriage turned. Even if the road were circular, the jade figure would rotate, keeping the finger pointing in the same direction."

It is unclear when exactly the device was created. We know with certainty the object existed in the third century AD. This machine may have been invented even earlier, indeed, as much as 1,200 years earlier.

An official history for 500 AD describes how: "The south-pointing carriage was first constructed by the Duke of Zhou [beginning of the first millennium BC] as a means of conducting home wards certain envoys who had arrived from a great distance beyond the frontiers. The country was a boundless plain in which people ¡ost their bearings as to east and west, so the Duke caused this vehicle to be made in order that the ambassadors should be able to distinguish north and south."
If this information is correct, the invention would date from about 1030 BC. But Needham suspects that the word "carriage" was inserted in this account by scribes, and that what is being described is a "southpointer", that is, a compass.

The Chinese scholar Zhang Heng (A.D. 78 - 139) who was one of the world's first scientists to propose that the universe is infinite in both space and time and also the creator of the first seismograph has sometimes been credited with building the south-pointing carriage.

However, according to Joseph Needham, British historian of Chinese science and technology, is director of the Needham Research Institute in Cambridge, England it is unlikely Zhang Heng constructed the first cybernetic machine. 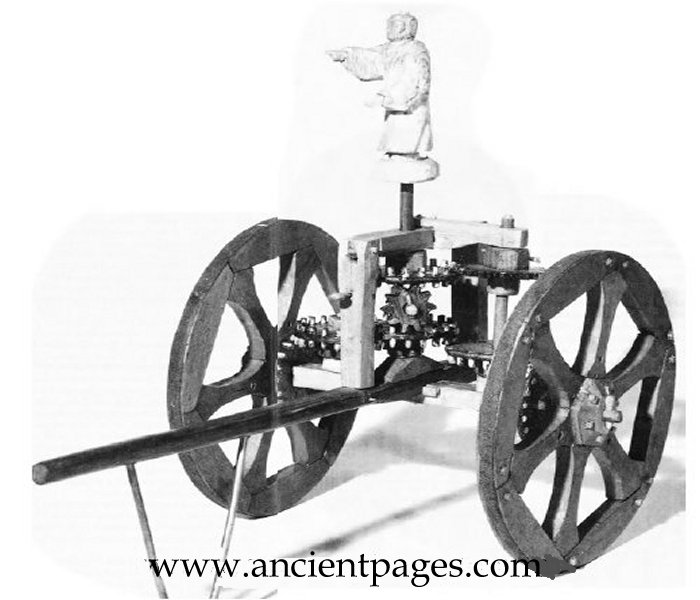 Model reconstruction of a "southpointing carriage" based on a description dating from the 3rd century AD.

This is the engineering work of an unknown ancient person whose identity remains a secret. Who was he or she? Perhaps there is a clue to sovling this mystery.

Needhman suggests that the famous mechanical engineer Ma Jun who lived during the Three Kingdoms era of China was the inventor and builder of the south-pointing carriage. Among many things, Ma Jun invented an intricate hydraulic-powered, mechanical-operated puppet theatre, improved silk loom and constructed square-pallet chain pumps meant for irrigation.

Joseph Needham describes Ma Jun's mechanical theatre in a passage taken from the Sanguo Zhi, Records of the Three Kingdoms:

He took a large piece of wood and fashioned it into the shape of a wheel which rotated in a horizontal position by the power of unseen water. Then, he arranged images of singing-girls which played music and danced, and when (a particular) puppet came upon the scene, other wooden men beat drums and blew upon flutes. Ma Jun also made a mountain with wooden images dancing on balls, throwing swords about, hanging upside down on rope ladders, and generally behaving in an assured and easy manner. Government officials were in their offices, pounding and grinding was going on, cocks were fighting, and all was continually changing and moving ingeniously with a hundred variations. 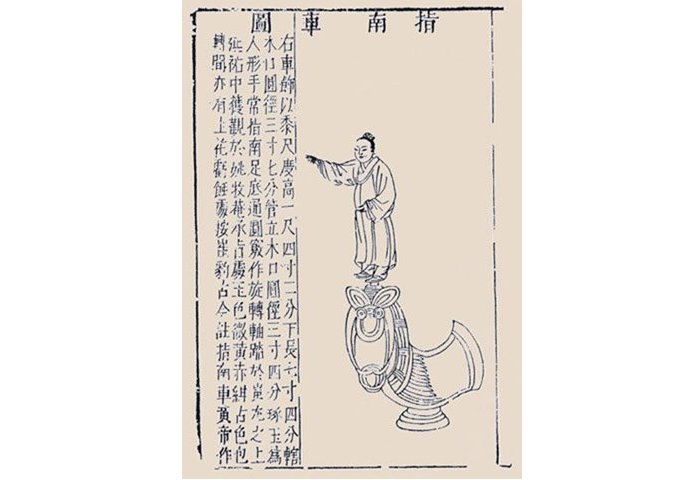 Now let's return back to the subject of the remarkable south-pointing carriage. If the machine did not use a magnetic compass, how did it work?
According to Temple, the device "had a train of differential gears, similar to those in a modern automobile.

Perhaps the function of a differential gear should be explained as follows.

When a wheeled vehicle is turning a corner the wheels on opposite sides of the vehicle are clearly going to need to turn at different rates since the near side is traveling a shorter distance than the far side.
With a hand-cart or horse-drawn carriage, this may not pose such prob lems. But when a vehicle has power being applied to the axle to make the wheels turn, how is it possible for one wheel to be permitted to speed up a little, and the other slow down a little, on the same axle?

This is made possible only by an ingenious combination of gear wheels and flywheels: the differential gear."

The precision needed in the construction of the south-pointing carriage almost defies belief. For the outside road wheels alone, Needham points out, J. Coales, in The Historical and Scientific Background ofAutomation, "has calculated that a difference of only one per cent between the wheel circumferences would lead to a change of direction of the pointing figure of as much as 90 per cent in a distance only fifty times that between the two wheels."

This was because the carriage would veer more and more to one side if one wheel were smaller (relative slip). So that for this south-pointing carriage, the size of the road wheels had to be accurate to a margin of error far less than one per cent, and a commensurate accuracy in size of gear wheels would have been necessary.

This points to engineering of such a high order that we must admit it is a genuine ancient masterpiece!