A. Sutherland - AncientPages.com - Many have laid claim to having solved the mystery of the enigmatic round terracotta tablet - Phaistos Disk.

No one has managed to solve it.

Does the Phaistos Disk contain a message left by an unknown culture present on Earth thousands of years ago?

Does it relate to the destruction of Atlantis? Why does this artifact exist? Who created it and for what purpose? What kind of information is stored on the disk?

The disk was found by Luigi Pernier, the Italian archaeologist excavating ruins of the ancient Minoan Palace of Phaistos, on Crete in 1908.
It's important to add that the enigmatic artifact was spotted in a stratum belonging to the sixteenth century BC, but it may be of much earlier, Atlantean origin.
Until now, scientists have not been able to decipher mysterious script that covers this strange small and round, terracotta tablet. Also no other evidence of the script has been ever found. It is one of the most puzzling riddles of the modern archaeology.

"The significance of the symbols is hotly debated amongst scholars both in terms of what each symbol literally represents and their linguistic meaning..."

"Without any concrete evidence whatsoever, various theories as to the significance of the text on the disk include a hymn to the earth goddess, a court list, an index of religious centers, a letter of greeting, a fertility ritual, and even musical notes. However, unless other disks are found which would give linguists a wider range of text to study or archaeologists discover an equivalent of a Rosetta stone, we must face the likelihood that the Phaistos disk will remain a tantalising mystery which hints at, yet does not reveal, a language that has been lost to us." Ancient History Encyclopedia
More than a century has passed since the Phaistos Disk was found and numerous attempts, even unconventional ones, have been made to decipher the proto-syllabic unknown hieroglyphic script which probably originate from outside of the Island Of Crete.

The disk's average diameter is 16 cm, and it is 2.1 cm thick. It is inscribed on both sides with ideograms, quite different from Cretan writing, arranged in a left-hand spiral.
The inscription contains 242 individual symbols, 122 can be found on side A and 119 on side B.
These symbols are divided into 61 groups by vertical lines. There are 45 different signs and among them diverse depictions of children, women, heads with feather-crowns, running men, birds, animals, insects, tools, plants and weapons. The disk is estimated to be about two millennia but it could be much older.

In the center of one side is a lotus flower, and curiously, 15 signs which follow it, are identical to those discovered in prehistoric Brazilian inscriptions. 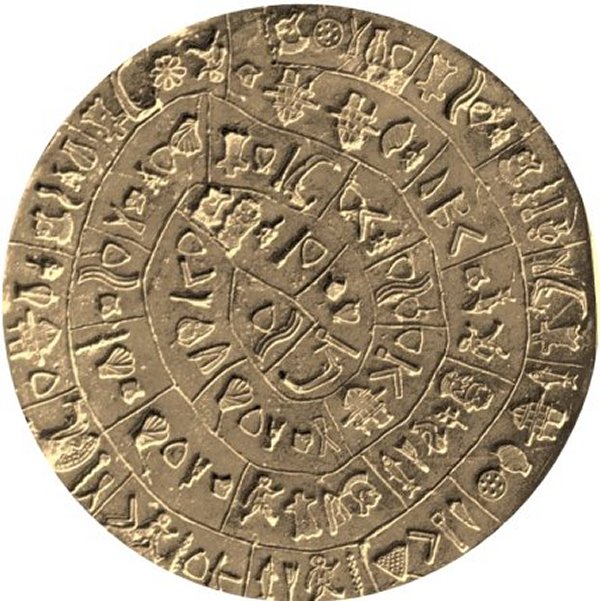 There are also constellations of the Pleiades, Pisces and Serpens depicted on the disk. Was the strange disk a very accurate astronomical calendar? Or perhaps a calculating device of the ancients? After one hundred years from the day of its discovery, inscribed text on the disk remains undeciphered and none of these important questions has been answered.
There is another interesting question:
Why was the object found in the ruined Minoan Palace? Did this object belong to the Minoans?

The very sophisticated Minoan culture flourished from approximately 2700 to 1450 BC. Phaistos was one of the most important centers of Minoan civilization, and the most wealthy and powerful city in southern part of Crete.
The palace was destroyed during an earthquake often related to the powerful volcanic eruption on the island of Thera (today known as Santorini) c. 1700 B.C.

Why did the Minoans use a rather primitive pictographic language along with much more advanced Linear A (though undeciphered) script like that found on a clay tablet that accompanied the Phaistos Disk?

Was the disk created much earlier? Is it a bit of legacy left by an unknown civilization for which the use of writing was commonly known!

That civilization is yet to be uncovered and then, the disk's true place of origin will be known.

The exact age of the Phaistos Disk is disputed. Also a form of the language used on the disk is a subject of disagreement.

Is the language on the Phaistos Disk a very ancient Greek similar to archaic Baltic?

It seems to be not alphabetic but rather syllabic language where each symbol is a syllable rather than a letter. It could also be (like in ancient Egypt) a some kind of mixture of both, namely syllables and letters to make additional difficulties for future decipherers.

Could the Phaistos Disk be a religious object and its both sides are covered with the text of a sacred hymn or perhaps religious chant perhaps or ritual song? 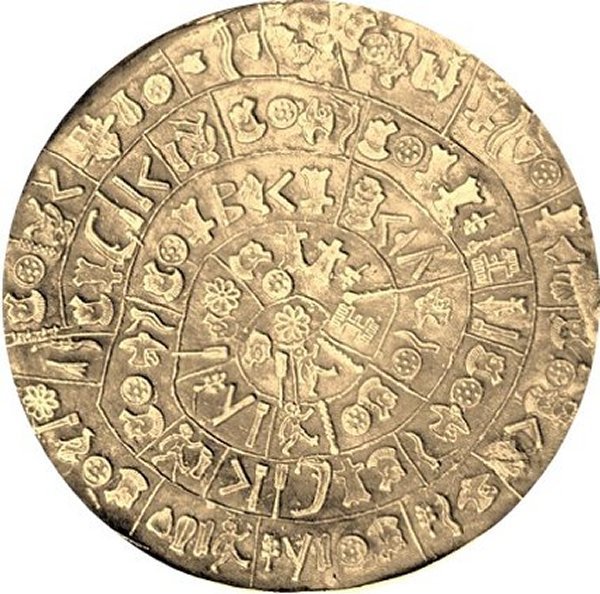 These are all valid questions but scientists do not possess any comparative sample of the printed or stamped method of writing like that used on the Phaistos Disk.

Nothing of this kind was found in numerous archaeological excavations conducted on the island of Crete over the last 100 years.

Marcel F. Homet (1897-1982) was a famous French Algerian scientist who published over twenty books on anthropology, ethnology and ancient history generally. Never claiming to solve the disk's enigma, believed that the Phaistos Disk of Greece might be related to Atlantis.