AncientPages.com - Egypt is a land full of ancient mysteries and one of them is an astonishing discovery made by archaeologists a while ago.

How and why did this mysterious mini-woman end up in an ancient Egyptian tomb? Was she a woman of high power and influence?

Did she play an important role in the ancient Egyptian society? 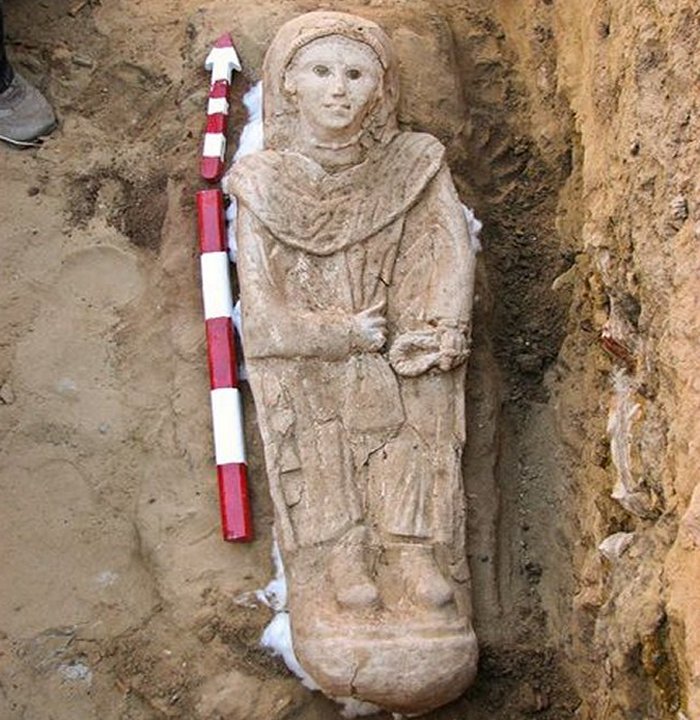 Who was she? Image credit: Egyptian Supreme Council of Antiquities

The mummy, measuring just 3.2 feet (97 centimeters) dates back to the Roman era. She was discovered in a 2,000-year-old tomb in the Bahariya Oasis, about 225 miles southwest of Cairo. Covered in intricately molded plaster, the woman was wearing a tunic, headscarf, necklace, bracelet and shoes.

She was dressed in Roman robes and scientists think that the burial style indicates she belonged to Egypt's long period of Roman rule, from 31 BC until the Arab invasions of the 7th century. 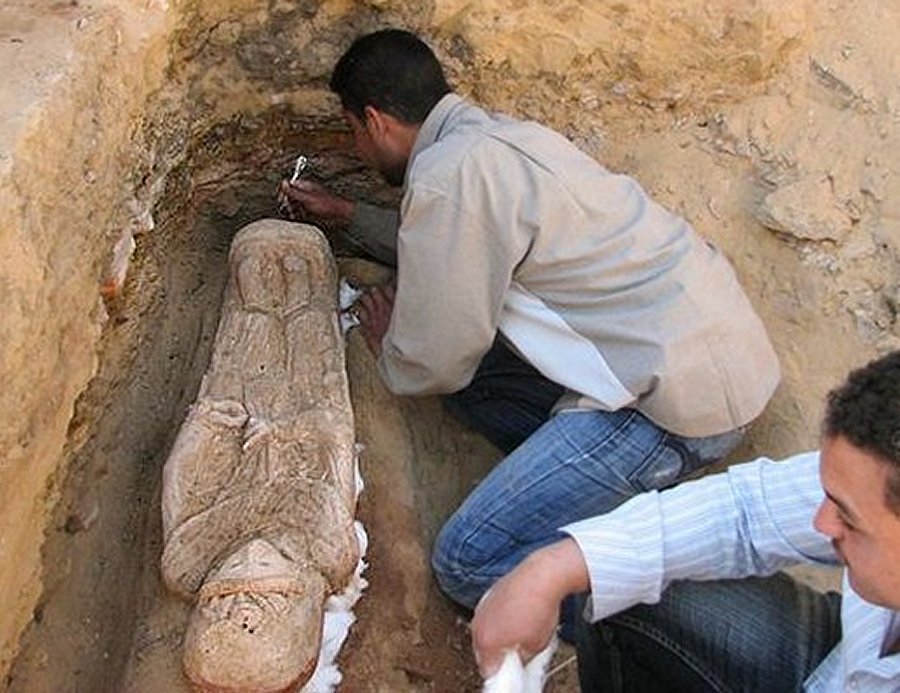 The site contains at least 14 tombs from the era when ancient Rome controlled Egypt, from 30 BC to AD 395. Jewelry, funerary masks, and pottery were also found, though the sand-covered tombs have been damaged by humidity and seeping groundwater.

An additional and important discovery are golden relics depicting the four sons of the Egyptian god Horus. 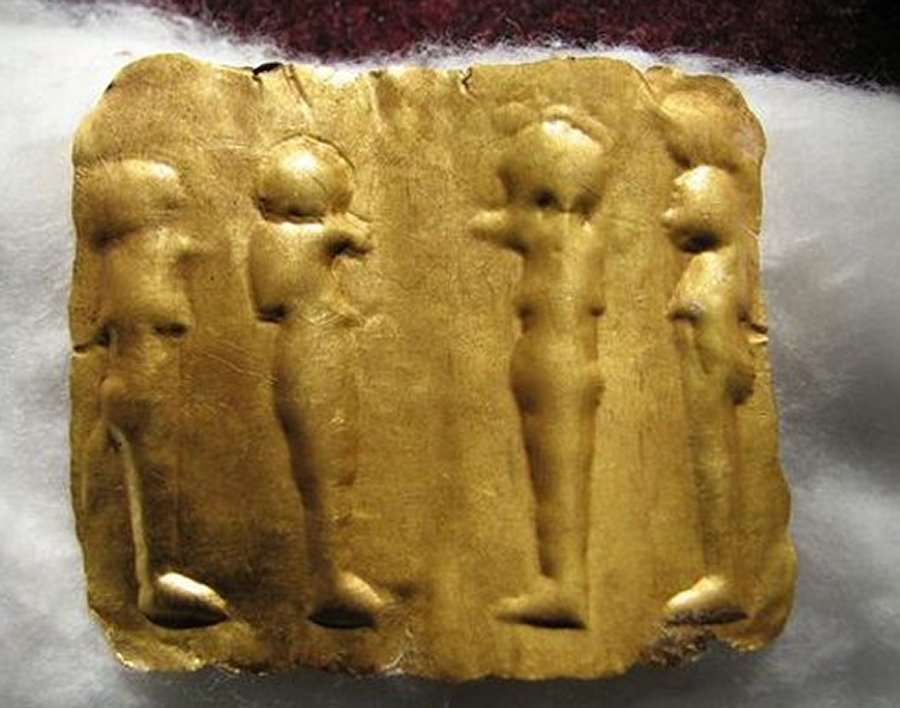 Embossed on a sheet of gold from the newfound Greco-Roman tombs in Egypt, the four sons of Horus-ancient Egypt's god of the sky-were believed to protect the intestines, lungs, stomach, and liver. Image credit: Egyptian Supreme Council of Antiquities

The identity of the woman remains a mystery. At first scientists thought she could have been a child, but considering the amount of hard work making the coffin as beautiful as possible, it seemed unlikely. It is more probably she was a woman of high power and influence.

Perhaps she was a dwarf. Short stature didn't prevent dwarves in ancient Egyptian culture from attaining high positions in society. Some served as assistants to the pharaoh, while others were looked up to as gods. 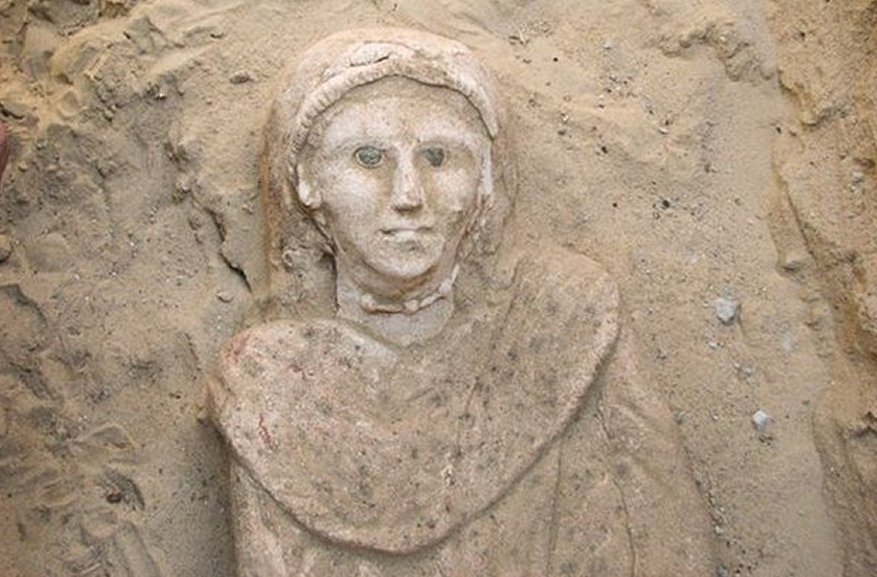 This mummy is covered by layers of plaster," turning the deceased into something of a human statue. Image credit: Egyptian Supreme Council of Antiquities

The remains of dwarfs are abundant and include complete and partial skeletons. Dwarfs were employed as personal attendants, animal tenders, jewelers, and entertainers. Several high-ranking dwarfs especially from the Old Kingdom (2700-2190 BC) achieved important status and had lavish burial places close to the pyramids.

Their costly tombs in the royal cemeteries and the inscriptions on their statutes indicate their high-ranking position in Egyptian society and their close relation to the king. Some of them were Seneb, Pereniankh, Khnumhotpe, and Djeder. 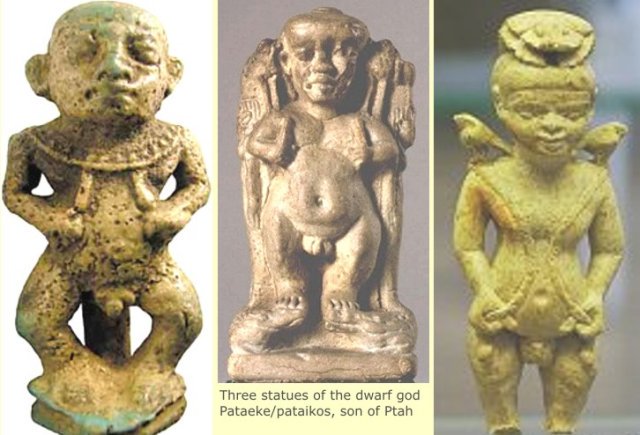 There were at least two dwarf gods, Ptah and Bes. The god Ptah was associated with regeneration and rejuvenation.

The god Bes was a protector of sexuality, childbirth, women, and children. He was a favored deity particularly during the Greco-Roman period. His temple was recently excavated in the Baharia oasis in the middle of Egypt.
The burial sites and artistic sources provide glimpses of the positions of dwarfs in daily life in ancient Egypt. Dwarfs were accepted in ancient Egypt; their recorded daily activities suggest assimilation into daily life, and their disorder was not shown as a physical handicap.

Wisdom writings and moral teachings in ancient Egypt commanded respect for dwarfs and other individuals with disabilities," writes Chahira Kozma in the science paper "Dwarfs in ancient Egypt".

We may never know the true identity of the mini-woman discovered in the mysterious tomb.