Inside the cave, there are several mysterious carvings that remain unexplained and some have even suggested that the cave holds the secret of the Holy Grail.

It has been speculated that it was used by the Knights Templar, who founded nearby Baldock. There are numerous theories about the cave covering Freemasons and Templars as well as possibilities that the cave was a prison or an anchorite cell. However, so far none of the theories have been confirmed. 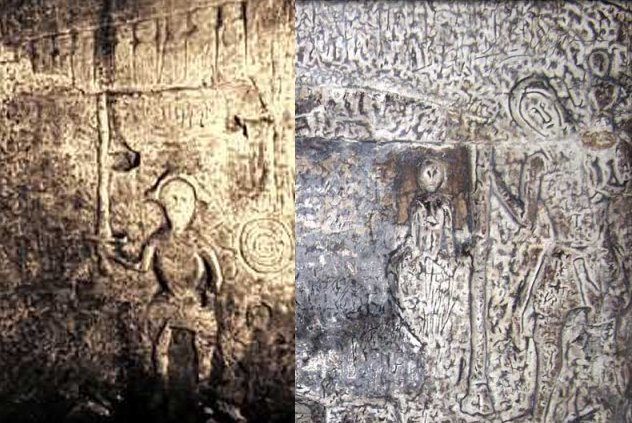 Although the origin of the cave is unknown, the story of the rediscovery is very well known.

The Cave was discovered by accident in August of 1742 by workmen erecting a bench in a butter market in the Mercat House, which has since been demolished.

A millstone was found in the ground, which when lifted disclosed a vertical, well-like shaft, about 2 feet (0.6 m) diameter and 16 feet (4.8 m) deep. Toeholds had been cut in the chalk on opposite sides to form steps. A small boy was "volunteered" to make the first descent. It was found that the Cave was more than half-filled with earth and "debris". 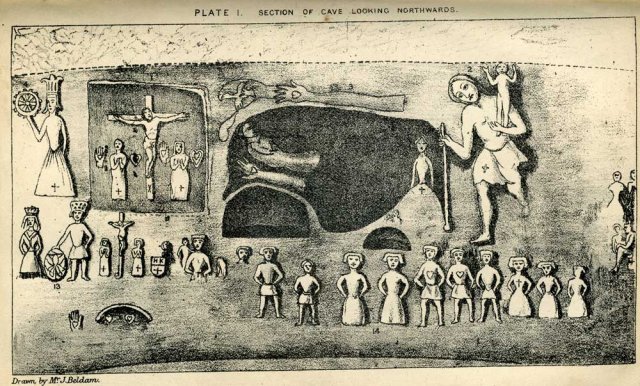 Plate I from Joseph Beldam's book The Origins and Use of the Royston Cave, 1884 showing some of the numerous carvings. Public Domain

Present-day visitors to the Cave will notice that the dome of the Cave has been bricked over and that there is a grille, in the pavement above, through which light penetrates.

When the Cave was discovered, however, the dome above was complete and partly tiled. It was said to have been within a foot (30 cm) of the surface of the road.

Also noted was the existence of what is now called the East Shaft, an opening then almost closed by several courses of clunch blocks painted red to look like bricks.

Only two and in some places three courses now remain. It is believed to have been a chimney or an air vent.

In the expectation of finding buried treasure, the shaft was enlarged and the Cave was emptied quickly, uncovering the carvings in the lower part of the chamber. There was no scientific archaeological investigation made at the time but according to the Rev. G. North who visited the Cave shortly after its discovery, the contents included, apart from earth, some decayed bones, and a skull, fragments of a small drinking cup and a small unmarked piece of brass.

The millstone, which covered the entrance, is now in two pieces, one forming the last step of the present entrance, the other lying alongside. The original entrance is closed and now lies under the road.

According to the Roystone Cave Society "the carvings in the Cave include four saints. Below the original entrance is St. Christopher, patron saint of travelers, with the child Jesus on his shoulder and staff in hand. Moving to the left high up on the west part of the wall is St. Katherine. Farther to the left is St. Lawrence who was martyred on a gridiron. 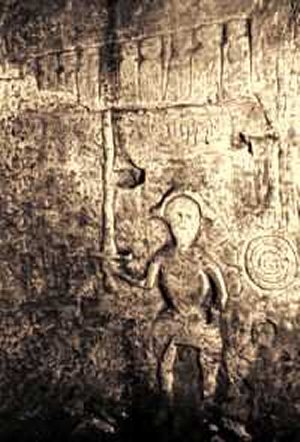 Next is the figure with the drawn sword which might be St. Michael or possibly St. George, patron saint of England who in symbolic terms saved the lady (the church) from the dragon (the devil or the oppressor). St George's sword points to what might be the twelve apostles with Judas the small figure at the back towards the right-hand end of the row.

The large panel on the left of St. Christopher represents the Holy Sepulchre having a damaged figure of Christ awaiting the resurrection above the large niche on the left. Mary Magdalene, or an angel on the right-hand side sits on the stone rolled away from the entrance. The dove and the hand above may represent the Holy Spirit. The niche below probably held a lamp.

The long row of figures below includes both men and women and although none can be identified those marked with crosses are possibly saints and those with hearts may be martyrs. The two small figures below St. Katherine may be (although this is by no means certain) Richard I (Lion Heart) and his Queen Berengaria whose crown is shown floating above her head as she was never actually crowned Queen. The long vertical cross on their left is a branched or floriate cross and represents the high altar. Although currently identified as a cross there is a possibility that it represents a sword.

Beneath St. Lawrence is a figure with upraised arms that has been variously identified as King William of Scotland and King David. Interestingly, a similar figure appears at the head of a 13th century illuminated manuscript of Psalm 69, now in Trinity College Library, Cambridge, where King David is shown rising from the water. Psalm 69 is a plea for help and a lament about being misunderstood.

Elsewhere in the Cave are Calvary scenes with Mary and John and a group believed to show the Holy Family but uncertainty surrounds the remaining figures in the Cave.

There are several large niches among the carvings, which may have been for relics or lights.The whole surface of the lower part of the Cave is covered with names cut by visitors, a result of the uncontrolled access to the Cave before the time when Royston Town Council took over the Cave and installed the railings to prevent visitors touching the soft carvings."

As previously mentioned the true origin of the Royston Cave is still shrouded in mystery. According to Stewart W. Miner there is in fact strong evidence that the cave has a connection to the Templars and ancient Freemasons.

"Scholars, on the basis of their studies of the carvings and the structure of the cave, are united in their conviction that Royston Cave was used by the Templars during the period from 1307 to at least 1347 and possibly before and after those dates.

Among those who have studied the issue are Sylvia Beamon, author of “The Royston Cave - Used by Saints or Sinners?” and Peter T. Houldcroft, author of “A Pictorial Guide to Royston Cave, and The Medieval Structure within Royston Cave”.

Royston's unique cave is remarkably engraved with religious figures, pagan and Masonic symbols. The authors explore similarities between carvings and graffiti found in Hertfordshire, Cambridgeshire, and elsewhere in Britain and Europe. 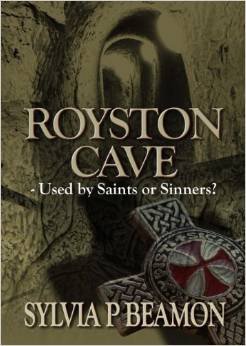 This fascinating book explains the historical influences of the Order of the Knights Templar and their rival crusading order, The Knights Hospitallers, who later inherited most their estates.

It shows how the cave's structure bears comparison with the Church of The Holy Sepulchre in Jerusalem, which was at the heart of the Templar's world. Its original research provides a wealth of information on: The formation of the Templars.

The history and enigma of Royston cave · Their commercial enterprises and banking system.

Their cult and esoteric knowledge and their eventual downfall. Mediaeval carvings and symbols This book will be relevant for Historians, Archaeologists or those wishing to explore the cave and the many other exciting historic and Templar sites throughout Europe. Read more

Beamon states that the Knights Templar of the area close in to Royston were not fighting knights but primarily artisans who farmed and looked after the local estates. She suggests that these knights brought their goods to the market in Royston, that they used the upper part of the cave for storage of their butter and cheese, and that they may have used the cave for overnight lodging before returning home. 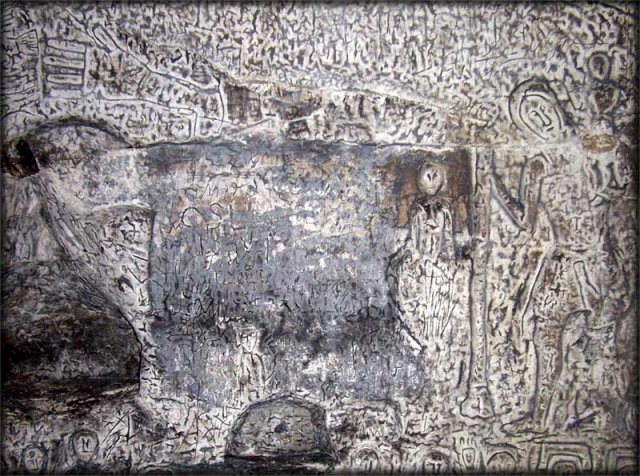 She also recognizes the possibility that Templars in the area may have used the lower part of the cave as a chapel, possibly for initiations. 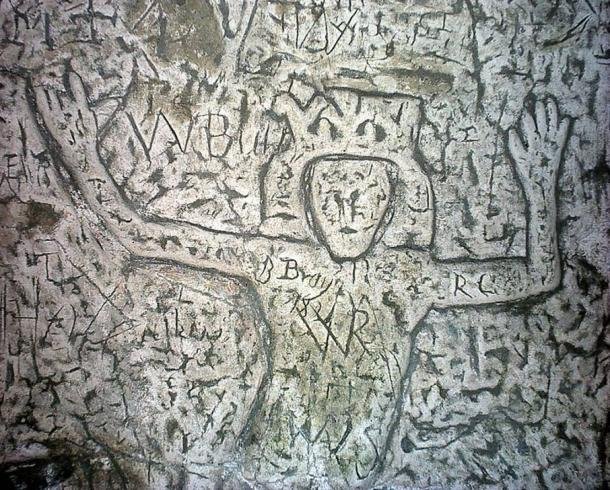 Houldcroft, in contrast, states that the cave appears to have served an entirely ritualistic purpose. He suggests that the cave was a place where Templars assembled to pledge loyalty to each other and to be initiated into an underground secret order. He also asserts that these ceremonies, because of cave access and size, restricted the number that could be accommodated at any one time. He speculates that the ceremony involved access to the cave by an entrance shaft and a reception on the platform to which reference has been made previously.

On the platform, Houldcroft postulates, the candidate may have been prepared, in a manner quite like that in which candidates for the degrees in Masonry are prepared, before being permitted to approach the lower chamber by ladder.

Once on the floor of the cave, Houldcroft theorizes, the candidate may well have undergone ceremonies in which he was caused to pass through the structural "grave" of the cave and thereby experience death and spiritual rebirth, preliminary to receiving accouterments designating him as a member of the organization.

Sometime after the demise of DeMolay in 1314, the cave was shut down and filled in. When this occurred is not known. In what is termed the East shaft of the cave there appears a stone on which the date 1347 is engraved. The numbers are carved deeply into the stone, giving the appearance of being genuine, and in the view of Houldcroft, this stone may well signify the date on which Templar use of the cave ended."

The Royston Cave and its true story remains an unsolved mystery