Ellen Lloyd - AncientPages.com - In ancient times, the city of Thonis-Heracleion, known in modern tiles as the lost kingdom of Cleopatra served as a gateway to Egypt. Today, this mysterious legendary city is submerged in Egypt's Aboukir Bay, near Alexandria.

Why the city sank remains a mystery, but it was swallowed by the Mediterranean Sea and has been buried in sand and mud for more than 1,200 years.

New amazing underwater discoveries allow archaeologists to piece together clues and to create an image of what life was like in the ancient city. 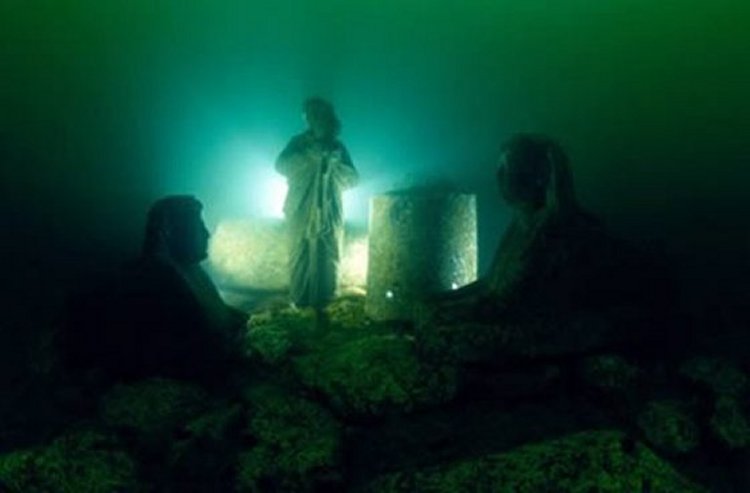 Known as Heracleion to the ancient Greeks and Thonis to the ancient Egyptians the city was rediscovered in 2000 by French underwater archaeologist Dr. Franck Goddio and a team from the European Institute for Underwater Archaeology (IEASM) after a four-year geophysical survey.

"Prior to its discovery in 2000 by the IEASM, no trace of Thonis-Heracleion had been found. 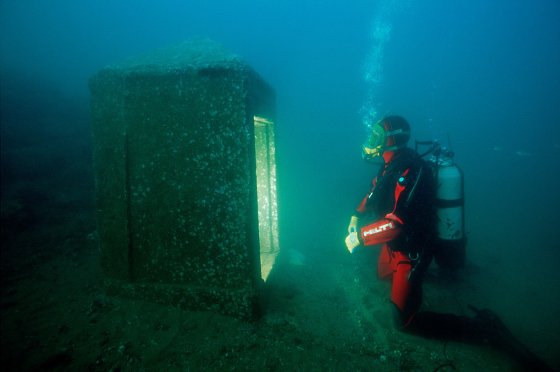 Among the most important monuments that were discovered at the temple area of Thonis-Heracleion is this monolithic chapel (naos) dating to the Ptolemaic period. It served as a key for the identification of the city. © Franck Goddio/Hilti Foundation, photo: Christoph Gerigk

Its name was almost razed from the memory of mankind, only preserved in ancient classic texts and rare inscriptions found on land by archaeologists.

The Greek historian Herodotus (5th century BC) tells us of a great temple that was built where the famous hero Herakles first set foot on to Egypt. 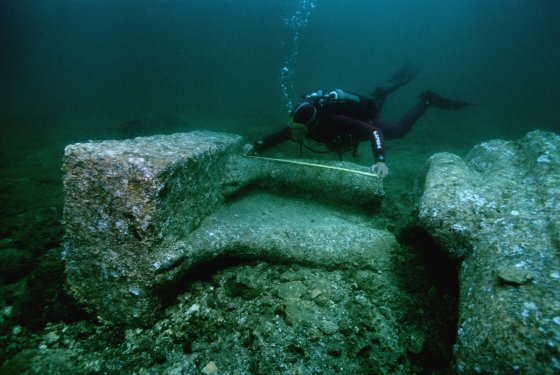 An archaeologist measures the feet of a colossal red granite statue at the site of Heracleion discovered in Aboukir Bay. © Franck Goddio/Hilti Foundation, photo: Christoph Gerigk

He also reports of Helen's visit to Heracleion with her lover Paris before the Trojan War. More than four centuries after Herodotus' visit to Egypt, the geographer Strabo observed that the city of Heracleion, which possessed the temple of Herakles, is located straight to the east of Canopus at the mouth of the Canopic branch of the River Nile," Dr. Frank Goddio writes on his website.
As we have previously seen in our article Lost Kingdom Of Cleopatra - An Amazing Egyptian Underwater City scientists believe that the entire city was completely submerged, along with all the artifacts, statues, columns and other beauties of the palace of Cleopatra. 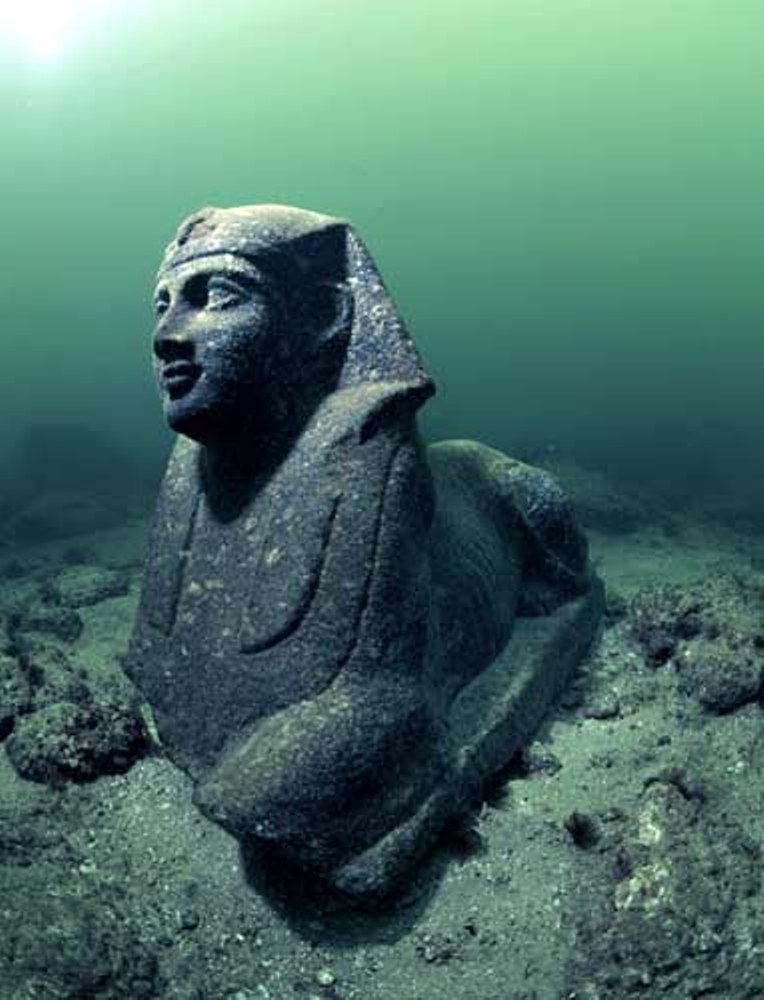 Today, these ancient statues are like forgotten memories of the past. © Franck Goddio/Hilti Foundation, photo: Christoph Gerigk

Several of the submerged artifacts remained largely intact. Amongst the discoveries were the foundations of the palace, shipwrecks, red granite columns, and statues of the goddess Isis and a sphinx. 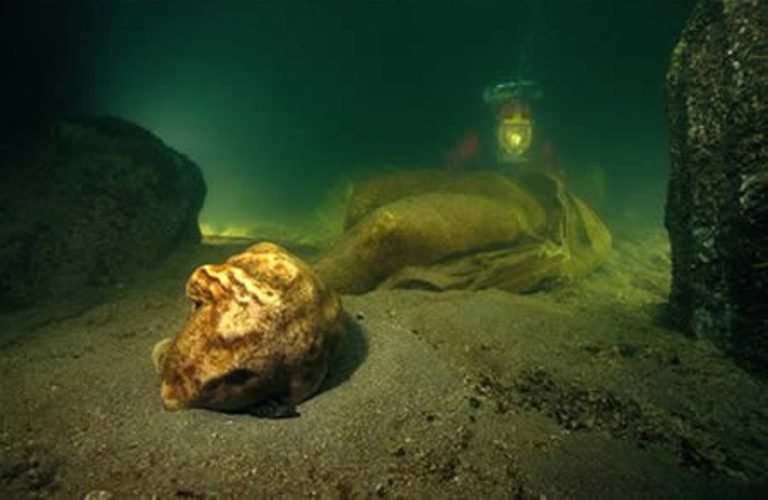 Once this was part of Cleopatra's kingdom. © Franck Goddio/Hilti Foundation, photo: Christoph Gerigk

Among the massive limestone blocks toppled in the fourth century was a huge quartzite block with an engraving of a pharaoh. An inscription indicates it depicts Seti I, father of Ramses II. 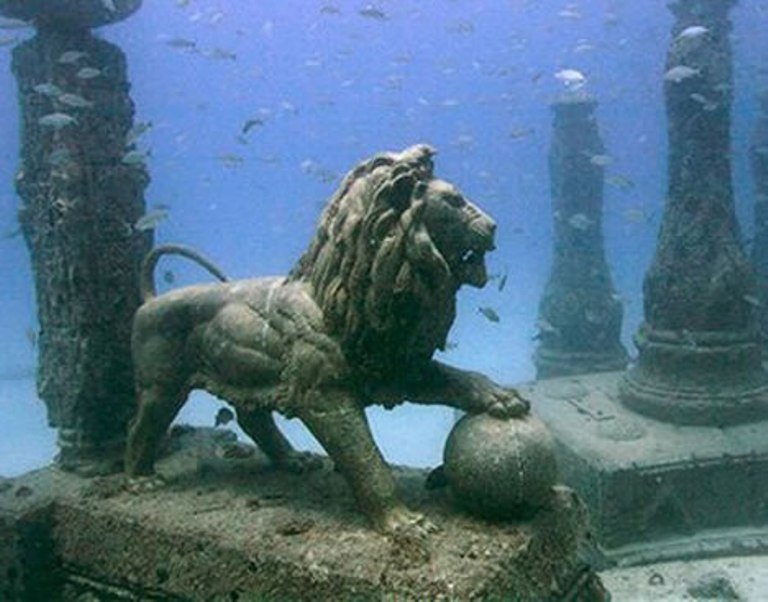 Divers also discovered a colossal stone head believed to be of Caesarion, son of Cleopatra and previous lover Julius Caesar, and two sphinxes, one of them probably representing Cleopatra's father, Ptolemy XII.

Researchers believe that the city was a central area used as a customs hub where trade coming from Greece and other places in the Mediterranean entered Egypt. 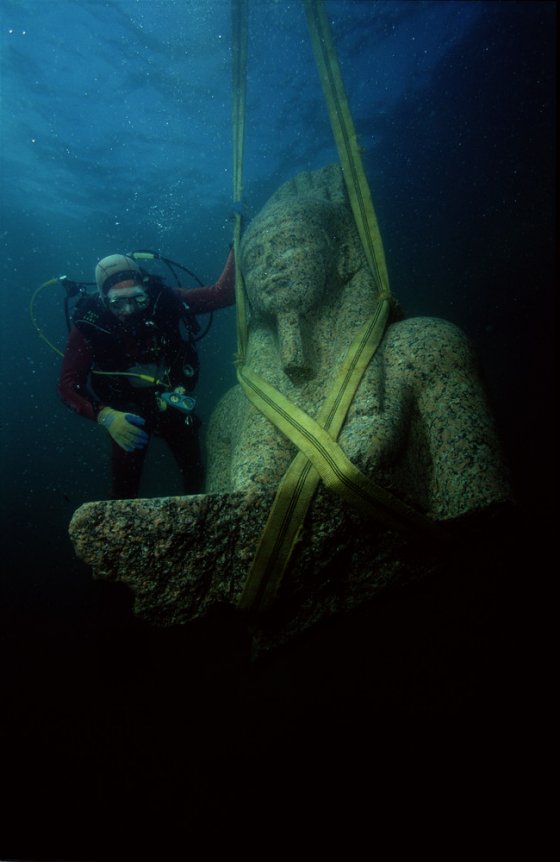 A colossal statue of red granite (5.4 m) representing the god Hapi, which decorated the temple of Heracleion. The god of the flooding of the Nile, symbol of abundance and fertility, has never before been discovered at such a large scale, which points to his importance for the Canopic region. © Franck Goddio/Hilti Foundation, photo: Christoph Gerigk

"The site has amazing preservation. We are now starting to look at some of the more interesting areas within it to try to understand life there," said Dr. Damian Robinson, who is working on the site and is director of the Oxford Center for Maritime Archaeology at the University of Oxford.

"We are getting a rich picture of things like the trade that was going on there and the nature of the maritime economy in the Egyptian late period. There were things that were coming in from Greece and the Phoenicians."

"It is a major city we are excavating," Robinson said. 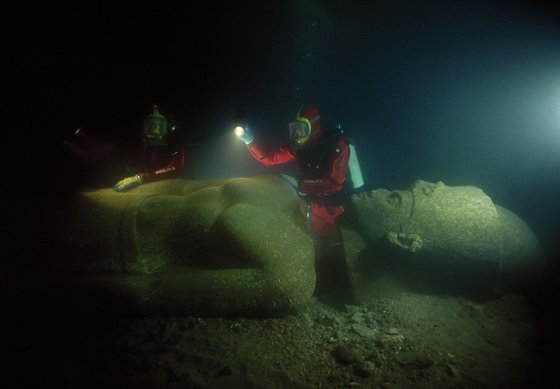 Franck Goddio and divers of his team are inspecting the statue of a pharaoh. The colossal statue is of red granite and measures over 5 metres. It was found close to the big temple of sunken Thonis-Heracleion and reassembled on the site. © Franck Goddio/Hilti Foundation, photo: Christoph Gerigk

Everyone who finds underwater archaeology a fascinating subject can now look forward to Dr. Giddo's new documentary that will highlight the major discoveries that have been unearthed at Thonis-Heracleion during a 13-year excavation.

"The TV documentary provides a fascinating insight into the work of underwater archaeologists and presents the most important discoveries that have been made in the last 13 years in Thonis-Heracleion. The scale and the diversity of the results have amazed experts: "The archaeological evidence is simply overwhelming," says Sir Barry Cunliffe, eminent archaeologist at Oxford University.

"By lying untouched and protected by sand on the seafloor for centuries they are brilliantly preserved." Among the finds is the largest known statue of the Egyptian god of the Nile flood (Hapi) and one of the largest known concentrations of ancient ships. Additionally, there are well preserved shrines from the heart of the temple area, votive items and jewelry, coins and finely carved official inscriptions on stone documenting life in the city and exchange with other cultures.

The TV documentary traces the various stages of years of painstaking survey and excavation work. Using 3D animation, the structures of the ancient city become again visible: buildings and temples, ships, piers and jetties and the channel systems are returning to the surface. But the work is far from over: "We are just at the beginning of our research," says Franck Goddio, "we will probably have to continue working for the next 200 years for Thonis-Heracleion to be fully revealed and understood." 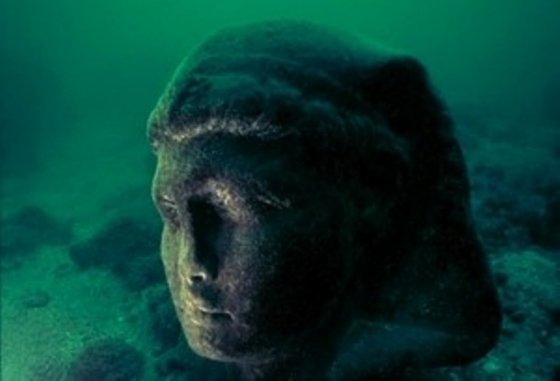 "The archaeological evidence is simply overwhelming," said Professor Sir Barry Cunliffe, a University of Oxford archaeologist taking part in the excavation. "By lying untouched and protected by sand on the seafloor for centuries they are brilliantly preserved." 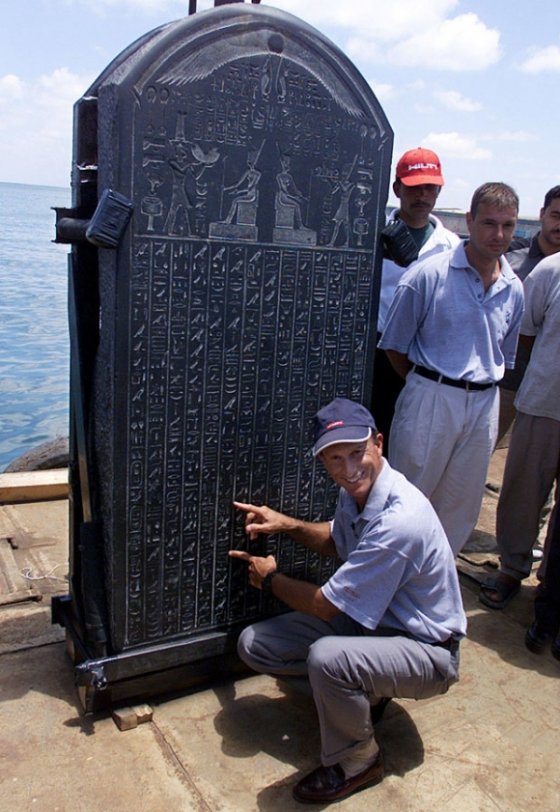 French Marine archaeologist Frank Goddio explains text on the stele of Heracleion on a barge in an Alexandria naval base June 7, 2001. 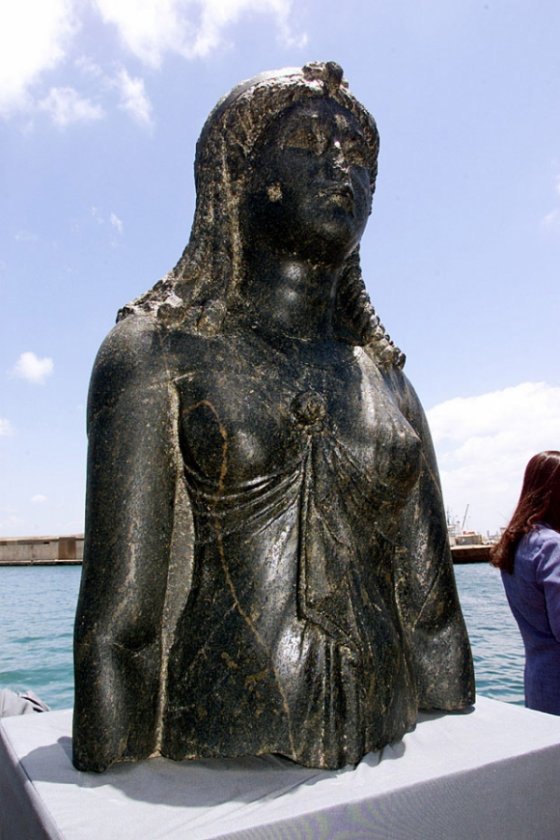 The statue of the Goddess Isis sits on display on a barge in an Alexandria naval base on June 7, 2001.

Many advanced ancient civilizations ended due to earthquakes, tsunamis or other natural disasters and we are now looking at the artifacts belonging to of them...

There are many ancient secrets at the bottom of the oceans and we can learn more about our ancestors with help of emerging technologies that provide us with an opportunity to explore the depths as never before.