A. Sutherland -  AncientPages.com - In Old Norse mythology, the Norns were known as ‘Shapers of Destiny’. These goddesses ruled the fates of people, determined the destinies and lifespans of individuals. The Norns were the equivalent of the Greek Moirai ('the Fates), responsible for destiny and personification of a single, unavoidable fate.

Before these three mysterious female beings arrived, the Aesir gods had a wonderful life. At first, they built Asgard and then, they enjoyed springtime and peaceful days. When the Golden Age ended, the three Norns arrived from Jotunheimr. 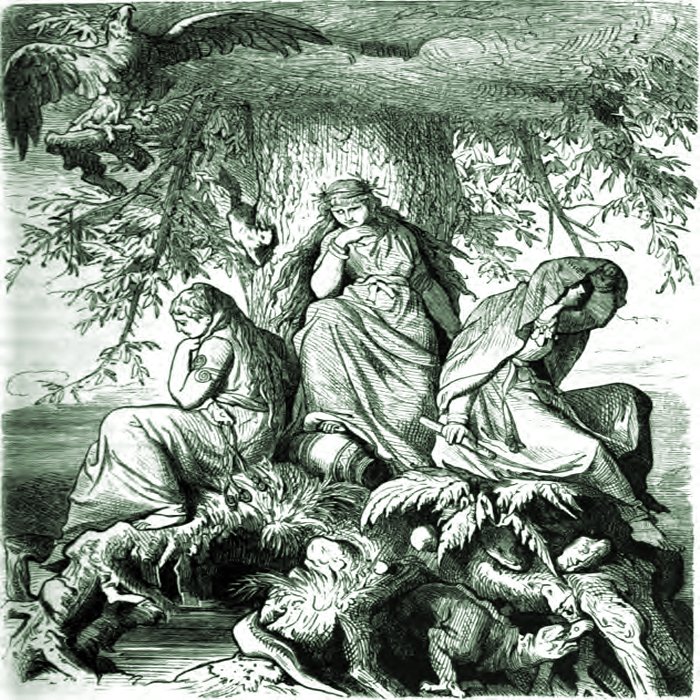 The Norns Urðr, Verðandi, and Skuld under the world oak Yggdrasil. Illustration, 1882 by Ludwig Burger via Wikipedia

Three principal and very powerful Norns lived in the mysterious well of Urd (‘fate’), which had its location beneath one of the roots of the giant ash tree - Yggdrasill (World Tree”), which formed a column linking the realms of the gods, mankind, the giants and the dead.

This root was named Urd, while the other roots were Verdandi (‘being’) and Skuld (‘necessity’). The names of these most powerful creatures in Norse mythology were: Urd, which means ‘What once was’, Verdandi, meaning ‘What is coming into being’; and Skuld, meaning ‘What shall be.’

The youngest of the Norns was believed to be cruel and merciless, she decided the life expectancy of the born children and personified the Dying Moon. But there were also other Norns, both benevolent (of divine lineage) who could influence lives positively, and malevolent, who had enough power to reverse a person’s fortune and send nightmares.

According to the Völuspá, ( Old Norse: “Sibyl’s Prophecy”) poem consisting of about 65 short stanzas on Norse cosmogony, the history of the world of gods, men, and monsters from its beginning until the Ragnarok (“Doom of the Gods”), the Norns ‘cut on wood’, which probably means that they used to carve magical runes on the trunk of the sacred Yggdrasill. 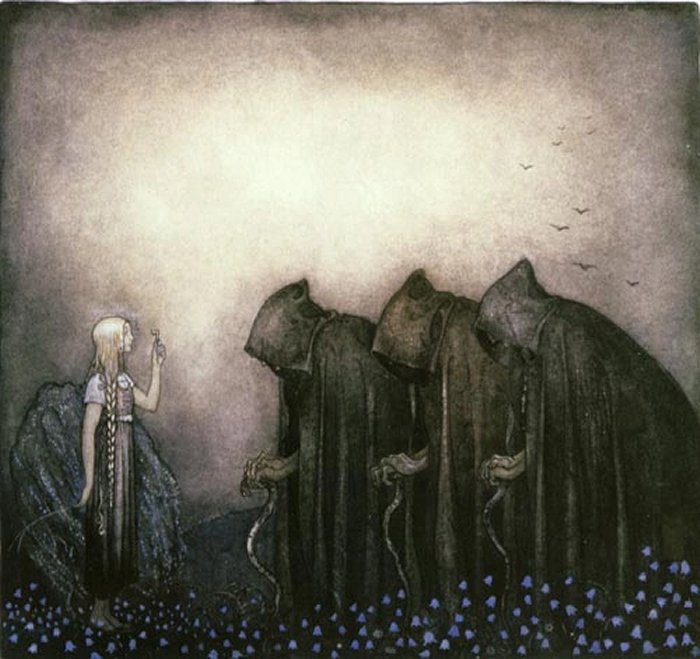 The custom of recording dates and numbers of days and years by cutting notches into the wooden walls of the home – is very old in Norway. The Norns could also record the days in a person’s life.

According to Gylfaginning, there were also other Norns, both benevolent and malevolent, who had enough power to reverse a person’s fortune.

The Norns were believed to visit each newly born child to determine events in its life. A certain runic inscription discovered in a church in Borgund in Norway informs as follows:

“The Norns determine good and bad things and they have brought great sorrow to me…” (also translated as follows: “The Norns have done both good and evil.” No one had as much power and wisdom as they did,.

Who were these mysterious supernatural females? They differed in their origin and they may have come from dwarves (as the daughters of the dwarf Dvalin), giants, elves, and the Aesir themselves.

A person’s quality of life and fortune were explained by the origins of the Norn that was believed to protect the individual.

The Norns are mentioned in countless passages in ancient literature of Scandinavia, and strong faith in these beings continued long after the introduction of Christianity.