Conny Waters - AncientPages.com - Scientists can once again offer evidence Stone Age humans were not as primitive as previously thought.

Early cave paintings of hunting scenes may give the impression our Stone Age ancestors lived mainly on chunks of meat, but plants—and the ability to unlock the glucose inside—were just as key to their survival.

Plants rich in starch helped early humans to thrive even at the height of the last Ice Age, researchers say.

While the evidence around meat eating is clear, the role of plant foods is less understood. Animal bones can last millions of years and still show cuts made by human butchering tools, whereas almost all plant remains disintegrate.

"Plants were the staples. They were the foods that formed the basis of our calories in most environments," said Dr. Amanda Henry, a paleobiologist and associate professor at Leiden University in the Netherlands. 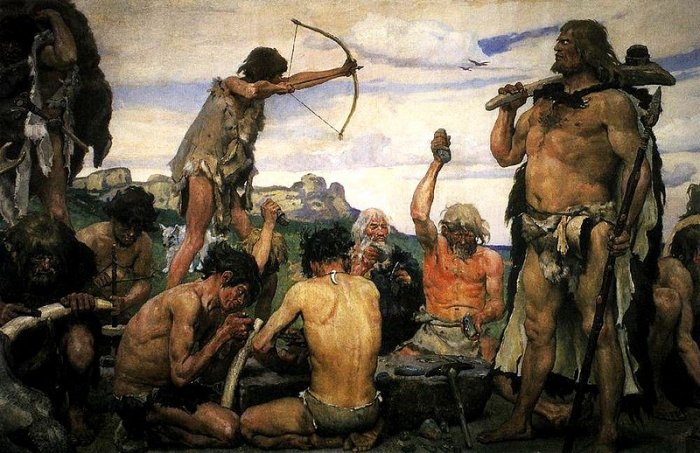 Tubers and cereals are full of starch—making them good sources of glucose, which is important for brain growth as well as energy, says Dr. Henry.

Some of the earliest evidence she found of eating tubers and cereals dates back 40,000 years, to the Paleolithic era. Neanderthal remains discovered in caves in Iraq and Belgium show that our cousins likely ate water lily tubers, and grains from relatives of wheat and barley grasses.

But unlocking the energy in them required innovation. The grains may have been eaten green when they are easier to digest, but many tubers are toxic raw, says Dr. Henry.

"They are likely to have cooked them," said Dr. Henry. This not only releases energy but also makes tubers safe to eat.

'(We've found) evidence of heating food in the presence of water which suggests they were boiling them," said Dr. Henry. "Changes in the starch granules—which suggests this type of cooking—were found on the dental calculus (tartar)."

The Neanderthal remains indicate they ate a wide variety of plant foods. This throws doubt on a theory that they died out because they had a narrower diet than our direct ancestors, Dr. Henry says.

The Boomerang Was Used 20,000 Years Ago By Stone Age People

During the last glacial period when ice caps expanded to cover much of northern Europe, there was an explosion of a new technology driven by the need for processing new sources of plant food: the ground stone.

It was a major evolutionary success, dating back about 30,000 years, says Dr. Emanuela Cristiani, associate professor in prehistoric archaeology at Sapienza University of Rome, Italy.

Hunter-gatherers primarily used knapped tools, made from big pieces of stone, says Dr. Cristiani. "At a certain point another technology appears like a boom which is the ground stone technology … (It was) not used to cut or scrape or pierce, but to grind material," she said.

"It means people were … looking for new ways to eat during this dramatic climatic period," she said.

Grinding meant people could make flour, which is another way of unlocking the energy in plants. The team found evidence in ground stones and plant remains in dental calculus that hunter-gatherers in the central Balkans ate a lot of wild oats, legumes and acorn flour, says Dr. Cristiani.

The earliest evidence of flour dates back 30,000 years and was found in Russia, the Czech Republic and Italy.

It is likely that hunter-gatherers at the team's Italian research site ate cattail plants, which are abundant in a nearby river.

"We think they used mostly roots. The plant's root is very rich in starch and once it's dried, you can make it into flour," said Dr. Cristiani. The flour makes a sweet-tasting bread, she adds.

The average Paleolithic person who survived infancy seems to have lived to age 50 or 60. "It wasn't a life of luxury, it was probably a lot of work and generally cold, requiring quite a bit of effort," said Dr. Henry.

These early humans are likely to have died primarily from a combination of infections, parasites and physical trauma, she says.

Once people started settling and rearing animals and crops, disease levels rose—mainly because they jumped from animals to humans—and life expectancy appears to have fallen. "That being said, agriculture is associated with increase in population size. You're not living as long, but you're having more kids," said Dr. Henry.

Today, some people seeking a healthy alternative to modern industrialised diets look to the eating styles of our hunter-gatherer ancestors for inspiration.

The so-called Paleo diet eschews cereals, recommends few carbs and promotes meat and vegetables. But archaeologists say it does not represent the full diet of hunter-gatherers who ate cereals and relied on carbohydrates. 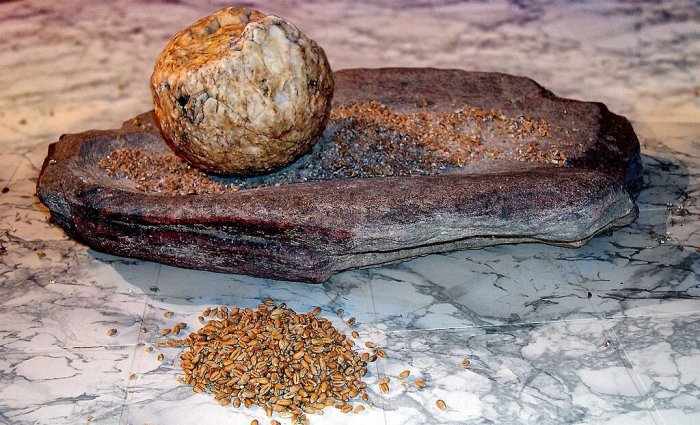 Ground stones were a 'major evolutionary success' as they allowed people to unlock the energy in plants by making flour. Credit: José-Manuel Benito Álvarez/Wikimedia commons

Researchers found remains of legumes, oats and acorns in 10,000-year-old teeth from the last hunter-gatherer groups who built villages along the Danube river. "This shows our idea of a Paleo diet as primarily based on protein intake is completely wrong," said Dr. Cristiani.

"It's important to understand for real what the (ancient) Paleolithic diet was. It was a very balanced way of eating," she said.

Hunter-gatherers were looking for calories, so carbohydrates in tubers and cereals would have been important.

"A lot of Paleo diets talk about health, but by this they mean weight loss. And I can't think of a single human ancestor who wanted to lose weight," said Dr. Henry.

Diversity was integral to people's diets, as was their ability to move to new regions. "Plant foods vary a lot between environments. So, every time a human went to a new place, they had to learn what was edible, what was going to kill them and what was medicine," she said. "There is no one size fits all diet. Anyone who tells you differently is trying to sell you something."