A. Sutherland  - AncientPages.com -  In Japanese mythology, Raijin (Raiden) is one of the eight gods of thunder, and master of lightning. His attribute is a sacred Taiko drum. He is commonly represented together with his brother, Fujin the god of the wind, but his personal companion is Raiju (“thunder animal” or “thunder beast”). 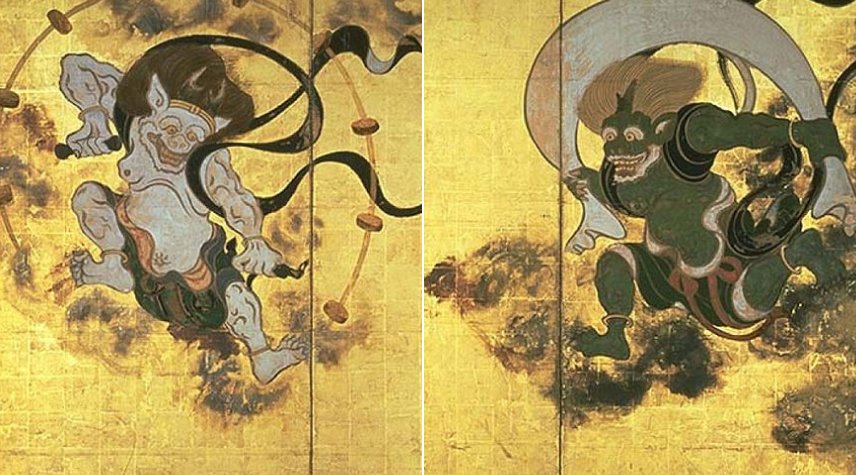 The beast is described as looking like a cat, badger, ball of fire, ball of lightning, weasel, monkey, Tanuki (Japanese raccoon dog), a white and blue wolf, and a wolf wrapped in lightning (its body is made of lightning and its cry sounds like thunder).” 1

Raiju is a demonic creature, usually harmless and calm but he loses his temper only during thunderstorms. He then becomes extremely agitated, leaping around in trees, open spaces, and among buildings. In Shinto beliefs, trees that have been struck by lightning were said to have been scratched by Raiju's claws. Another Raijin’s companion is a thunderbird Raicho, a pine dweller, which – as myths tell – is often sighted flying through a stormy sky.

Our knowledge of the god Raijin comes from Kojiki ("Records of Ancient Matters"), written in 673-686 AD. It is the oldest Japanese book and the most complete collection of Japanese Shinto myths, oral traditions and partly historical accounts down to 641 AD.

In the early Shinto beliefs, the central deities and creator gods, Izanagi and Izanami are parents of Raijin, who born from Izanami's corpse when she was in the land of darkness (Yomi). 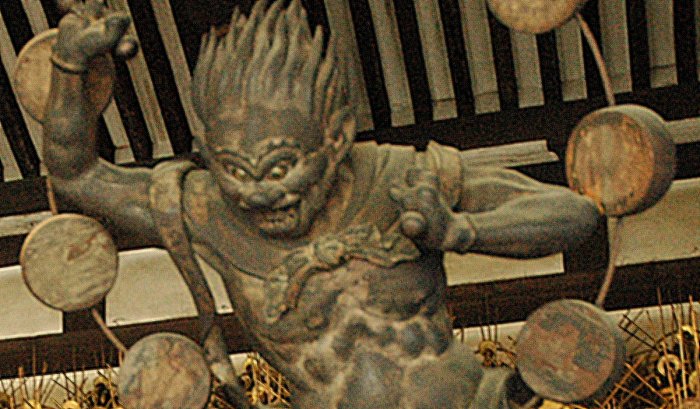 Raijin’s brothers include Fujin, the god of wind carrying a large windbag, Susanoo (the god of the sea and storms), Amaterasu (the goddess of the sun), and Kagutsuchi (the god of fire). But he has also many other siblings.

Nurikabe: Trickster That Manifests Itself As Invisible, Impassable Wall In Japanese Old Beliefs

Is The Legendary Tsuchinoko Real?

Fujin and Raijin are brothers and friends busy to control the climates of the universe, which is why they are usually represented together. But at the time before humans appeared on Earth, a fight arose between them for control of the storms. As a result, Fujin cut Raijin's left arm, but later, when the conflict was over, they were friends again.

Their sister Amaterasu returned Raijin his arm so they could play the sacred taikos again and generate lightning and thunder.

This demonic deity has a muscular, strong body, a frightening face with bulging eyes, hair standing on end, and large fangs. He has three fingers on each hand symbolizing the past, present, and future.

His drum was used to beat out the terrifying noise of earthquakes and storms in the sky accompanied by the sound of thunder. 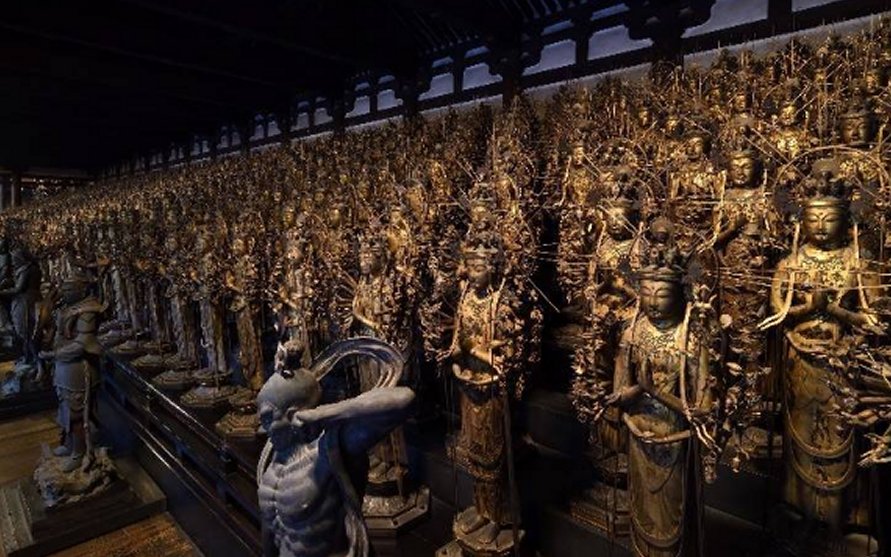 Buddhist temple Sanjusangen-do.  Inside the hall, the temple's principal image, a seated Thousand-Armed Kannon statue (a national treasure) is flanked by 500 standing Kannons on each side, for a total of 1000 enshrined statues (all national treasures). In front of the standing Kannon statues are Nijuhachibushu (28 Legions, protecting the Kannon deity) and Fujin and Raijin statues are among them. Image source

In Japanese temples and shrines, Raijin is traditionally depicted as a warrior figure or a protecting divinity. Two famous statues of Raijin and Fujin are among all the others in the group of 28 statues of guardian deities surrounding one thousand life-size statues of the Thousand Armed Kannon, at the old (dated to 1164) and prominent Buddhist temple Sanjusangen-do located in Kyoto, Japan.

The Raijin and Fujin sculptures are made of wood with lacquer, gold leaf and painted along with crystal, inlaid eyes, and considered national treasures of Japan.

God Of Thunder And Lightning – A Powerful Deity In Many Cultures

Raijin has many counterparts around the world. Tradition has it that storms, thunder, and lightning were often associated with the highest gods who could manipulate and control forces of nature. In many cultures, thunder was believed to be a creative force and a precursor to life-giving. Based on an old belief, rain is vital for the crops to grow and lightning fertilizes crops.

Myths and legends of Yoruba say that the greatest warrior-king, Shango, became the god of thunder, lightning, and storms after he died. Zeus (Roman god Jupiter) was traditionally regarded by the Greeks as the sender of thunder and lightning, rain, and winds, and while his weapon was the thunderbolt, the Shinto god spirit Raijin uses the Japanese Taiko drums to create the sound of thunder. In the Inca’s beliefs, Catequil (or Apocatequil), the god of thunder and lightning, was believed to create thunder by striking the clouds with his sacred spear and a mighty club. Indra used a powerful thunderbolt throwing light, and Thor, the protector of mankind in Norse beliefs, is a hammer-wielding god associated with thunder, storms, lightning, trees, and strength.

Raijin was both feared and venerated as a good protector of mankind, despite his terrifying appearance.

According to tradition, it was Raijin who protected the Japanese people from the conflicts and chaos initiated by China’s Kublai Khan.

Raijin helped to stop the attempted Mongol invasion of Japan in 1274, by creating Kamikaze ("Divine wind"), the typhoon that stopped the Mongol's dangerous advance and saved Japan at the time of the Mongol attacks.

The term ‘kamikaze’ was later used by the Japanese during the Pacific War (1941-1945) to designate the pilots of suicide planes, who were supposed to destroy the American invasion fleet before it reached the coasts of the archipelago.

Bane, T. Encyclopedia of Beasts and Monsters in Myth, Legend and Folklore