A. Sutherland  - AncientPages.com - Unlike American Indians, the Inuit people of Canada and Greenland have not in their cultural legacy many mythological stories from the time before the appearance of humans.

The Inuit people believed in the divinity of the sea and all the animals that dwelled in it. In many myths and legends of Arctic culture, Sedna is the highly honored deity and plays an important role, no matter versions of her story and diversity of her names given her by different Inuit groups. 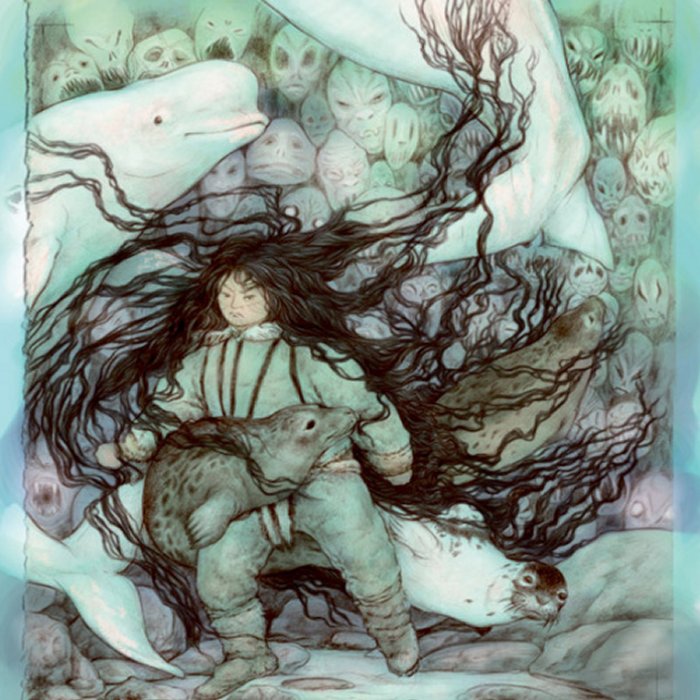 Sedna, a great spirit-goddess of the sea, who rules over the sea waters and all the animals that live there. Image source

Her story was widely distributed in many versions across Canada and Greenland.

In Inuit mythology, Sedna is the daughter of two giants who lived a very long time ago at the beginning of the world. She is a great spirit-goddess also known as the Mother of the Sea or Mistress of the Sea, and the progenitor of all sea creatures. She rules over the sea world, controlling all sea mammals.

Her father, Anguta, created the earth, the sea, and the heavens, while Sedna populated the sea with animals, and so she became the most powerful force in Inuit life.

According to one legend, she was a beautiful maiden, that one day was carried off by a raven, which wanted her to be his bride. In another version, the raven is replaced by a handsome mysterious hunter with an outfit made of furs, and his face was mysteriously covered. Sedna’s father explained that the man wanted a wife his daughter would be a good and capable companion, capable of sewing and cooking. The mysterious man accepted and took Sedna in a boat to their new home, which as the man said, was located on a beautiful island full of huts and people. When they arrived she saw nothing except a few stones, a cliff, and loons. From now on her only food would be raw fish.

For the first time, the man exposed his face, and that moment Sedna realized that he was a raven (in another version, he was a young loon), who could disguise himself whenever he wanted. 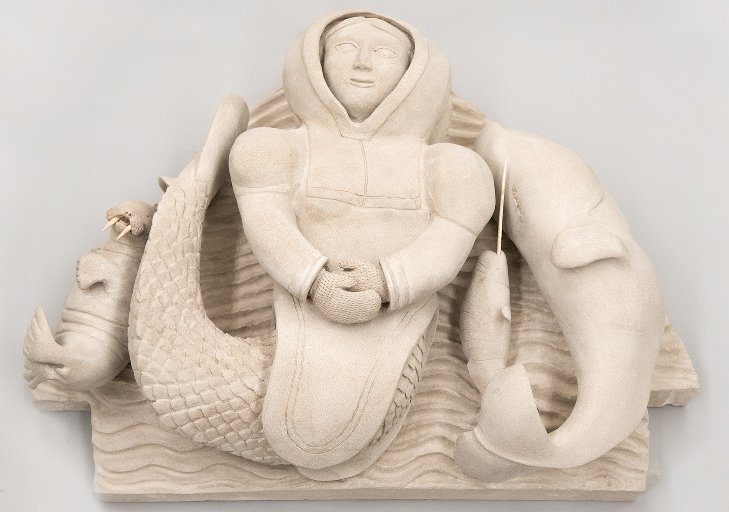 Sedna, by Inuit artist Bart Hanna, is a limestone sculpture of the Inuit sea goddess of the same name. (Photo: House of Commons)

“I used my power to transform myself into a human after I fell in love with you,” said the young loon.

“Otherwise, you would not have come away with me.”

Unhappy to live on the island, after a few days, she began to scream and calling her father, hoping her voice would reach him one day. He finally arrived and took Sedna to her true home.

When Sedna’s loon-husband came home, he wanted to know where his wife was. “Her father came and took her away,” the birds cried. He quickly disguised himself as the human, jumped into his kayak to chase Sedna. In the meantime, after several hours on the sea, they spotted a bird flying in the distance, It was the spirit bird and at that moment, Sedna knew that her husband had found her, using another disguise.

Her father tried to drive him away with the oars but the ocean was becoming more violent, and the man failed. The spirit-bird was seeking revenge, and the old man knew he must appease the angry spirit. There was only one way to satisfy the creature – to throw his daughter overboard into the sea.

Mysterious Hammer Of Thor In Canada Was Built Before The Arrival Of The Inuit – Did Vikings Raise The Monument?

Once her father had made this horrible sacrifice, Sedna struggled to keep her head above the water as giant waves washed over her. For a moment she was able to grip the gunwales of her father’s kayak but the old man was so frightened that he cut away her half-frozen fingers.

When at last she was able to grip the gunwales of her father’s kayak, he was seized with fear.  “I must do it,” he cried, “the spirit-bird makes the sea angry and demands your life.”

Her grief-stricken father returned home. The old man lay down on a thick pile of caribou hides inside the little tent, which was his and Sedna’s home for many years. During the night, giant waves of another storm reached the little tent where Sedna’s old father was sleeping. When the last powerful wave returned to the sea that night, it took the old man with it, down to Sedna’s home at the bottom of the sea.

Now, they together live at the bottom of the sea, and Sedna is a great spirit-goddess of the sea. She rules over the sea waters and all the animals that live there and is said to control the weather in the sea. Sedna has the power to either provide or destroy, and reigns over a vast realm where human souls, including her father’s, were imprisoned as punishment after death.

Far back in time, in case of impending hunger, the Arctic shamans often traveled across the sea and went into trance to come down to Adlivun, Sedna’s underwater home, and the Inuit underworld, to negotiate with the goddess and plead with her for food for people. Sometimes, Sedna was angry, denied their requests and sent them back to the surface.

Next time, when she was in a good mood, she promised that hunters would have food for their families during the harsh winter seasons.