Conny Waters – AncientPages.com – Ancient stone circles can be found in many places around the world. It’s still unclear why our ancestors created a circular alignment of standing stones, but these places are believed to have been worshiping sites.

Scientists have found evidence of star-shape anomaly at the center of a hidden stone circle in the Outer Hebrides. This discovery may offer new insight into ancient beliefs and the reason why these monuments were created thousands of years ago.

Could there be a potential link between ancient stone circles and the forces of nature? 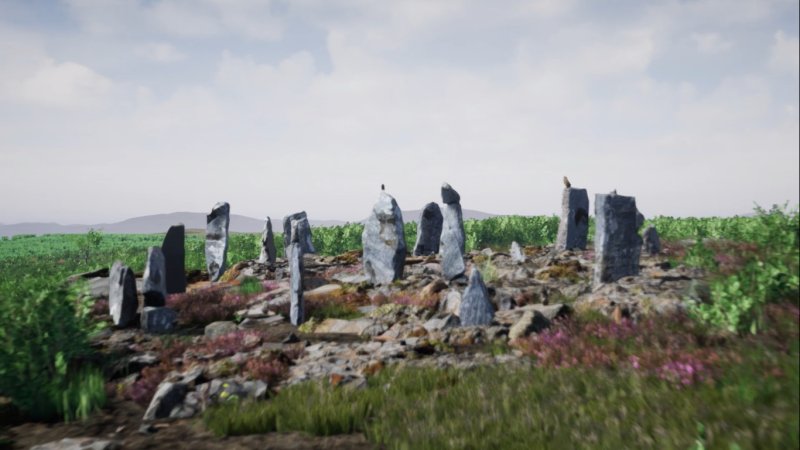 While studying prehistoric Tursachan Chalanais, the main stone circle at Calanais on the Isle of Lewis, the Calanais Virtual Reconstruction Project team, a joint venture led by the University of St Andrews with the Urras nan Tursachan and the University of Bradford surveyed nearby satellite sites to reveal evidence for lost circles buried beneath the peat.

Geophysics revealed that not only was the stone originally part of a circle of standing stones, but also that there was a massive, star-shaped magnetic anomaly in the center. Scientists think this was either the result of a single, large lighting strike or many smaller strikes on the same spot.

Such clear evidence for lightning strikes is extremely rare in the UK and the association with this stone circle is unlikely to be coincidental.

Did Ancient Oshoro Stone Circle Serve As A Portal To The Spirit World?

Whether the lightning at Site XI focused on a tree or rock which is no longer there, or the monument itself attracted strikes, is uncertain.

However, this remarkable evidence suggests that the forces of nature could have been intimately linked with everyday life and beliefs of the early farming communities on the island,” Project leader Dr. Richard Bates, of the School of Earth and Environmental Sciences at the University of St Andrews said.

Scientists were also able to virtually recreate another nearby circle, which had been lost with its stones either buried or lying flat.

Known as Na Dromannan, careful scanning of the stones allowed a full 3-D model to be built allowing the passage of the sun and moon around this circle to be tracked for the first time in four millennia.

Dr. Bates added: "For the first time in over 4000 years the stones can now be seen and 'virtually' walked around.

"Everyone will be able to visit this remote site and get a real sense of what it was like just after it had been constructed. We have only just scratched the surface of this landscape and already we can get a feel for what might be buried out there waiting for discovery."

Dr. Chris Gaffney, of the School of Archaeological and Forensic Sciences at the University of Bradford, said: "Evidence for such strikes within archaeological surveys is very rare and our work at Site XI demonstrates that without detailed scientific survey we would never be able to identify such events."

Dr. Tim Raub, of the School of Earth and Environmental Sciences at the University of St Andrews, added: "This evidence is rare because lighting strikes are conducted along the top 'skin' of the Earth's surface. The clarity of the strike suggests we are looking at events before the peat enveloped the site, more than 3000 years ago."

Professor Vincent Gaffney of the School Archaeological Sciences at the University of Bradford, said: "The dramatic results of survey on Lewis demonstrate that we have to understand the landscapes that surrounds these ritual monuments and the role that nature and natural events, including lightning, played in creating the rituals and beliefs of people many thousands of years ago."

“This is a thrilling discovery that helps us get inside the minds of the people who built the stone circles at and around Calanais. There is much still to find out about the so-called 'satellite' circles of Neolithic Calanais and this provides an important first step.

The modelling of Na Dromannan also helps us investigate whether this circle was astronomically aligned,” Dr. Alison Sheridan, Director of Urras nan Tursachan, the Calanais based charitable trust that partnered this research said.