Jan Bartek - AncientPages.com  - The Sedlec Ossuary in the Czech Republic is no ordinary Roman Catholic chapel. Located in Sedlec, in the suburbs of Kutna Hora, this is one of the most unusual chapels you can visit.

Nicknamed Church of Bones, or sometimes Bone Church visitors may not notice anything extraordinary on the outside but once you enter the chapel you should be prepared to cope with a gruesome sight. 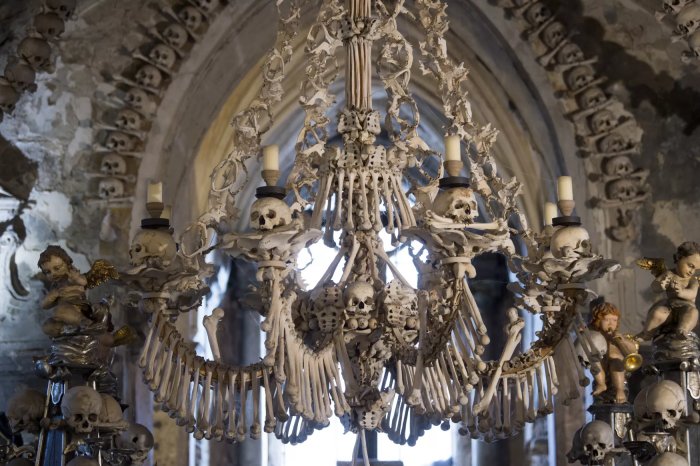 During renovation works of the 14th-century church archaeologists accidentally stumbled upon 34 mass graves with 1,200 skeletons, most of which belong to the victims of the Black Death and famine. Experts say it is the biggest find of its kind in Europe and the finding gives provides researchers with valuable historical information about people who lived in this community.

These bones belong to people who died during the mid-14th-century plague and in the subsequent Hussite Wars.

Extensive renovation of the Sedlec Ossuary started in 2014 and two years later archaeologists were granted permission to launch a survey.

"We have been digging around the ossuary. The most significant discovery we have made are mass graves of the victims of a famine in 1318 and the plague in 1348.

“It could be compared to the burial ground in East Smithfield in London, which has some 500 skeletons. We have discovered around 600 plague victims and 600 victims of famine, so altogether 1,200 skeletons. 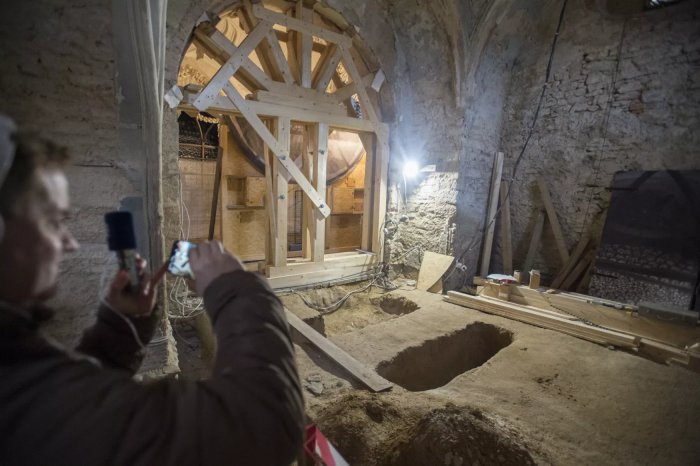 This year we also started research in the interior. Below the first pyramid, we found five mass graves, which are even older. So when the ossuary was built, they had no idea that the graves were there,” archaeologist Jan Frolík, who is one of the members of the research team said.

Frolik said the skeletal remains have already unveiled a lot about the population of Kutná Hora at the time:

“They could be characterized as a mining population because there is a significant prevalence of men over women.

The ratio of adults and children is around fifty-fifty, which is a common population make up. But the 30-percent prevalence of men shows that there were new miners constantly flowing into the town and that it was apparently a very dangerous trade.

Otherwise, I would say it was a typical medieval society, judging by the injuries and illnesses reflected in the bones. So there were common fractures of limbs, some of them badly grown together. As for the illnesses that can be detected this way, we have recorded tuberculosis and meningitis,” he explained. 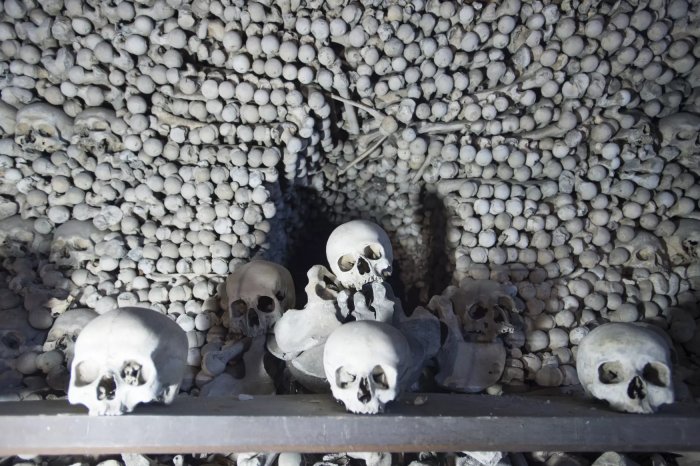 The Church of Bones is a popular tourist attraction but also a place of worship. Credit: CTK/Josef Vostárek

The story of the Church of Bones goes back to 1278 when the King of Bohemia sent the abbot of the Sedlec Cistercian Monastery to Jerusalem. The returning abbot returned with a jar of soil from the Golgotha. This “Holy Soil” attracted many people from different places and many wanted to be buried in Sedlec. In time there was no more room for skeletons and, thus the cemetery had to be expanded.

The Church of Bones in the Czech Republic is famous but certainly not the only place where we find walls decorated with bones and skulls of long-deceased people.

Under the city of Rome, Italy there is the Capuchin Crypt also known as the 'Bone Chapel'. Inside the Capuchin Crypt, there are remains of 4,000 Capuchin monks buried by their order. They ‘decorate’ the underground crypt with vertebrae chandeliers, skulls of real size and cross-bones. 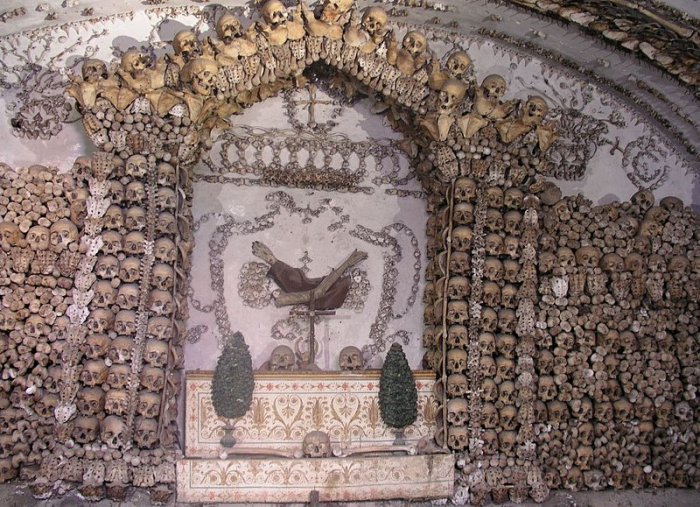 The skeletons are standing and are dressed in robes. These people who passed away a long time ago are staring from the walls and in the background, there are hundreds of anonymous skulls of those who died.

Even more bizarre are the bodies discovered by art historian Paul Koudounaris who hunted them down in secret Catholic vaults in Rome and churches across Europe.

In his book, Heavenly Bodies: Cult Treasures and Spectacular Saints from the Catacombs, Paul Koudounaris offers an intriguing visual history of veneration in European churches and monasteries of bejeweled and decorated skeletons. 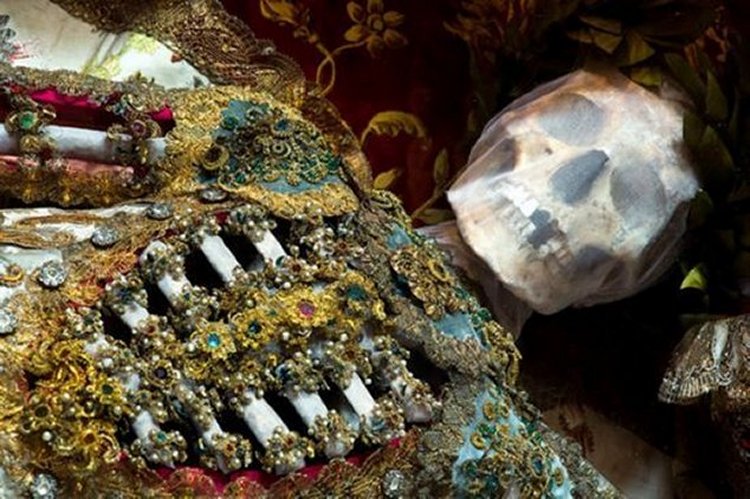 Beneath the streets of Paris, France there is a huge underground labyrinth with dark galleries and narrow passages. The Paris catacombs contain skeletal remains of some 6 to 7 million former Parisians. The bones were deliberately arranged in a macabre display of high Romantic taste. 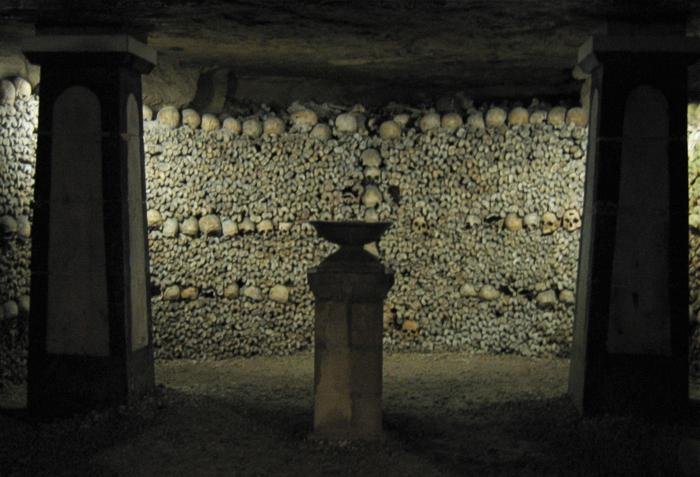 While visiting these particular chapels and catacombs it may be wise to remember that regardless of how macabre these piles of skulls and skeletons are, these are still places of worship and we should pay respect to those who rest there.