Jan Bartek - AncientPages.com  - Warrior graves dating back 2,000 years have been found by archaeologists near Bejsce in the province Świętokrzyskie (Świętokrzyskie Voivodeship), situated in southeastern Poland.

According to the archaeologists, the newly discovered cemetery covers around 1 ha and the cremated remains unearthed at the site include spear or javelin heads, and iron swords. 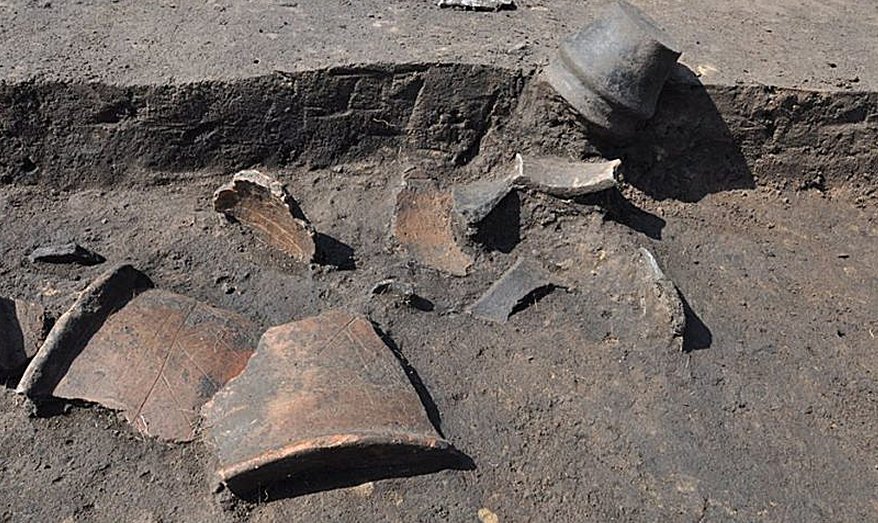 Archaeologists counted nearly 200 metal artifacts and their fragments after this year`s research. There are also bone, stone and clay items. Credit: Science In Poland

The remains of the cemetery are in an arable field, therefore the graves in which the cremated dead are buried are heavily damaged. In the spring of this year, archaeologists discovered numerous fragments of urns. This took place during surface surveys, which consist of walking through arable fields in search of artifacts lying on their surface. The number of shells and burned bones surprised archaeologists, so it was decided to start excavations.

"We do not know exactly how many graves were in the cemetery because our research is still at an initial stage, the graves are destroyed and often spread over a large area of the field," says research project leader Jan Bulas from the Institute of Archeology of the Jagiellonian University.

However, the results of August excavations give an idea of a high density of graves. At least 20 burials were discovered in a 200 sq m area. These are only researchers` estimates because some of the graves discovered during excavations are also heavily damaged. Just like their equipment, which has undergone analysis and conservation in recent months. 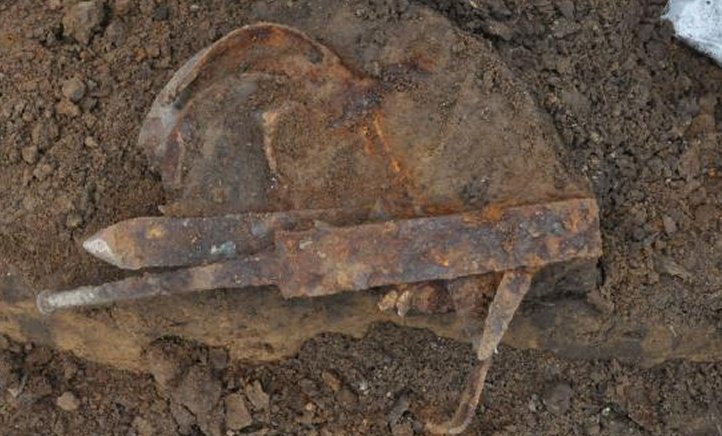 Warrior's grave at the time of discovery. Credit: Jan Bulas

"Heavily corroded and seemingly shapeless objects turned out to be fragments of swords or iron fibulas," the researcher says. During the first season of excavations, archaeologists managed to find a total of four swords from about 2,000 years ago.

"For comparison, we know two swords from the largest known in this region and fully studied necropolis from this period in nearby Michałowice. Meanwhile, our research is just beginning," the researcher notes.

Nine spear or javelin heads were also found in Bejsce. In total, archaeologists counted nearly 200 metal artifacts and their fragments after this year`s research. There are also bone, stone and clay items.

During excavations, archaeologists came across the remains of mysterious square structures. They have a square plan and most often triangular cross-section.

"Similar structures, so-called grooved objects, are known from other cemeteries from this period in southern Poland, but their function is still unclear. In Bejce, they contained fragments of ceramic vessels as well as metal objects," he says.

Interestingly, they are all oriented by cardinal directions. According to the archaeologist, they may be related to the designation of space in cemeteries for individual families.

It is not clear which communities should be associated with the deceased buried in the cemetery. Based on discovered vessels and other items, archaeologists identify this group as members of Przeworsk culture. Bulas thinks that they could have been representatives of the Lugii tribal union, a political entity made up of peoples of various origins. The texts of ancient historians are very ambiguous in this matter, scientists say.