Conny Waters - AncientPages.com - Fragments of some 100 Viking swords (and a few spearheads), have been unearthed in two closely located sites in a coastal area of northern Estonia, in the territory of the ancient Estonian county of Ravala, reports EER.

Archaeologists say it is the largest find of Viking swords in Estonia to date. 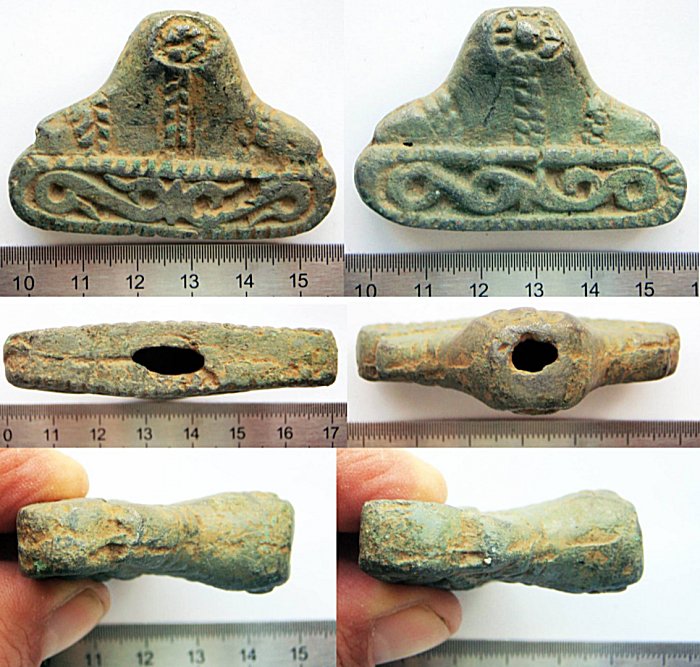 Part of the hilt of the sword of the XI-XIII centuries from Läänemaa. Image credit:  Department for the Protection of Antiquities

The swords date from the middle of the 10th century and are probably cenotaphs, grave markers dedicated to people buried elsewhere.

According to Mauri Kiudsoo archaeologist and keeper of the archaeological research collection of Tallinn University, the reason why the swords were not found intact, is due to the burial customs of the time.

According to a tradition dated to this particular period, weapons were put into the graves broken or rendered unusable. The grips of the swords allow us to determine which type of swords they are. They have been identified as H-shaped double-edged swords. This type of sword was the most common type in the Viking era and over 700 have been found in northern Europe.

Kiudsoo said that by 1991, Eight almost intact type H swords and about 20 fragments had been discovered in Estonia but the number has risen to about 100.

The overwhelming majority of the Estonian finds have come to light on the country's north coast, which lies by the most important remote trade route of the Viking era.

Since the Ravala finds are dated from the middle of the 10th century they prove for the first time that type H swords were in use in the territory of Estonia in the 10th century, Kuidsoo said.

The Viking Age (793–1066 AD) in Estonia was historically an important period in the history of Estonia. The country was a transit country during the Viking era. During this time, the most definitive export from the area of Estonia was iron; swords and spearheads were manufactured in Estonia, a land where the raw material of iron in the form of bog iron is found in several places.
It has been estimated that the export of iron from Estonia started before the Final Iron Age. According to Saxo Grammaticus (c. 1160 – c. 1220), a Danish historian, theologian, and author,
describes the Estonians participated in the Battle of Bråvalla on the side of the Swedes against
Baltic tribes.

Snorri Sturluson relates in his Ynglinga saga how the Swedish king Ingvar (7th century), the son of Östen and a great warrior, who was forced to patrol the shores of his kingdom fighting pirates from Estonia. He invaded Estonia and he fell in a battle against the men of Estland who had come down with a great army. After the battle, King Ingvar was buried close to the seashore in Estonia and the Swedes returned home. Similar military encounters continued according to Heimskringla sagas, which narrates that in the year 967 the Norwegian Queen Astrid escaped with her son, later king of Norway Olaf Tryggvason from her homeland to Novgorod, where her brother Sigurd held an honored position at the court of Prince Vladimir.

On their journey, "Vikings from Estonia" raided the ship, killing some of the crew and taking others into slavery. Six years later, when Sigurd Eirikson traveled to Estonia to collect taxes on behalf of Valdemar, he spotted Olaf in a market on Saaremaa and paid for his freedom. The Estonians were also involved in a battle (972 AD) with Icelandic Vikings in the vicinity of Saaremaa, as it is described in Njál's saga, a thirteenth-century Icelandic work.