A. Sutherland  - AncientPages.com - ‘One’ is a sacred symbol of great power. It is a symbol of the absolute, totality, infinity, and the center of the universe. It is equated with the mystic Center.

It is the center of being and the cosmos. In many cultures, it is considered a great number, representing the invisible but active creative force underlying everything that exists.

From ‘one’ breaks the plurality, but this number also means individuality and originality, and at the same time - loneliness. 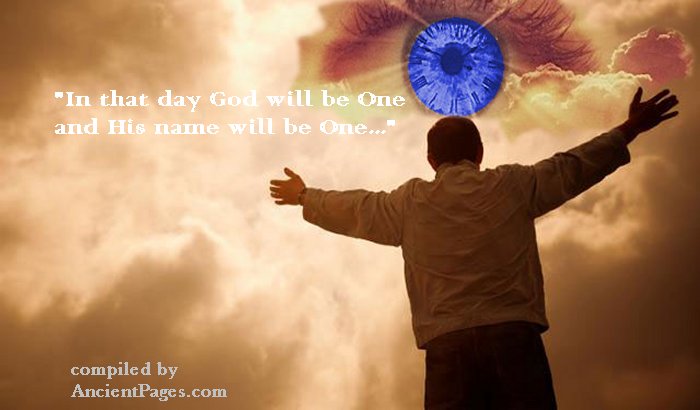 The ‘one’ has been considered the mother, root and source of all other numbers; added to each of them changes it from odd to even and vice versa.

In antiquity in the Middle East, the ‘one’ was the most perfect number. It was believed that by passing from zero to unity people, they were passing from non-existence to existence.

All other numbers were considered to be a multiplicity, the unity representing the Creator.

In beliefs of ancient Egyptians, God Ra (Re) was called the ‘One’, and in ancient Mesopotamian religion, the god of heaven, Anu was identified with the divine "Unity."

In one text, he is the one "who contains the entire universe."

The biblical prophet Zacharias, says: "In that day God will be One and His name will be One" (14, 9), which means that the Israelis, similar to their neighbors, saw the symbol of the Creator in one.

The ‘one’ also stands for spiritual unity - the common basis between all beings.

However, according to René Guénon (1886 – 1951), a French author, intellectual and an influential figure regarding metaphysics, sacred science, symbolism, and initiation, there is a difference between unity and one. However, Cirlot, J. E. in “A Dictionary of Symbols” says that ‘Guénon draws a distinction between unity and one, after the Islamic mystic thinkers: unity differs from one in that it is absolute and complete in itself, admitting neither two nor dualism. Hence, unity is the symbol of divinity. One is also equated with light…’

The ‘One Symbolizes Our Ego

It also symbolizes our ego and conscious activity, as well as the beginning of ventures and essential life stages. It is related to our individuality and its experience. It can mean both independence and loneliness depending on whether it manifests itself in a harmonious or non-harmonious way.

Number Eight Powerful Symbol In Ancient Traditions Of Many Cultures

Sacred Number Four – Perfect Number And Deep Meaning Behind It

The Pythagoreans referred to the number ‘one’ as the “monad”. It symbolized the creator. In cosmogony, it relates to the Supreme Being, divinity or the totality of all things. The concept may refer variously to a single source acting alone, or to a unified origin, or even to both.

Further, ‘monad’ means The One, Unity, The Great Spirit, Permanence, and many other names, too.

Some believe that “we cannot speak of the ‘One’ because to speak of it is to make an object of it, implying separation from it, thus misrepresenting the essence of Oneness from the start, a mysterious conundrum..”. (M. Lundy).

The number one symbolizes menhir, an upright man, standing in a position that makes a distinction from people to other creatures, masculinity, or finger. This number is mentioned in many very old proverbs.

“One can do little,” “one will not make expensiveness or cheapness,” One will not help everyone and everyone can. Sometimes the number ‘one’ stands for one hundred, and one hundred does not stand for one.

In the Tarot, the number one is the card of the Magician, while the Magician symbolizes the power of the will and the capability to achieve goals.

‘One-eyed’ means divine omniscience, and in the Hebrew alphabet, Aleph – is the first letter, which signifies the number ‘one.’ Aleph indicates the Oneness and Unity of the Creator. It also suggests that beyond the illusion of separation and duality is underlying Oneness – that nothing is separate and the Creator is the source of everything.