Conny Waters - AncientPages.com - Scientists have used DNA to recreate the skull of a mysterious, extinct cousin of the Neanderthals.

The genetic material came from a fossilized finger that belonged to a Denisovans female. Most of our knowledge about the Denisovans comes from small bone fragments and teeth recovered in Siberia’s Denisova Cave.

Previous studies reveal that the Denisovans had very large and unusual teeth, unlike those of Neanderthals and modern humans. The recent study now shows that Denisovans looked similar to the Neanderthals, but had wider heads and more protruding jaws.

“We expected them to resemble Neanderthals more than modern humans and this is what we found,” said Liran Carmel, a researcher on the team at the Hebrew University of Jerusalem. “But what fascinated us most is where the Denisovans differed from these other human groups.

“This might shed light on many of the questions that people have about the Denisovans, including how they adapted to their environment, and how the genetic traces they’ve left in modern humans might have helped them adapt to theirs.” 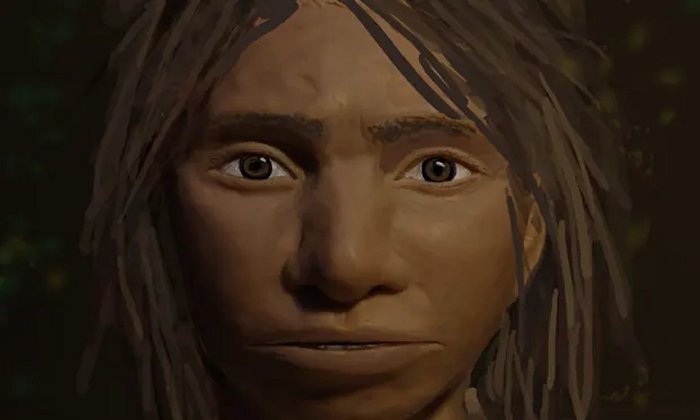 A preliminary portrait of a juvenile female Denisovan based on a skeletal profile reconstructed from ancient DNA found in a fossilized finger bone. Photograph: Maayan Harel

This study is very important and gives a unique opportunity to see what the Denisovans looked like. Previously scientists knew almost nothing about their appearance.

David Gokhman who participated in the study said the recreated skull can also shed light on how the Denisovans adapted to the conditions they lived in and what role their genes play in people alive today.

“All of this information is in our DNA, we just need to learn how to read it, and given how fast genetics is evolving, I don’t think it’s going to take very long,” said Gokhman.