AncientPages.com - In 1976 paleoanthropologist Mary Leakey and other scientists reported that they’d found ancient hominin footprints at a site in Laetoli, northeastern Tanzania.

The footprints were frozen in volcanic deposits from the Pliocene, an epoch that lasted from 5.333 million to 2.58 million years ago. The team hypothesised that the footprints belonged to an extinct hominin species famously known as Lucy. The species’ scientific name is Australopithecus afarensis.

Additional footprints were reported in 2016 by a research team made up of scientists from Tanzania and Italy. These footprints are about 150m away from the original discovery. This new trackway is surrounded by hundreds of footprints belonging to other mammals and birds; there are even frozen raindrop impressions. The hominin footprints were left by two bipedal (that is, walking on two legs) individuals walking on the same surface, at the same time, in the same direction and at the same moderate speed as those reported by Leakey and her colleagues. 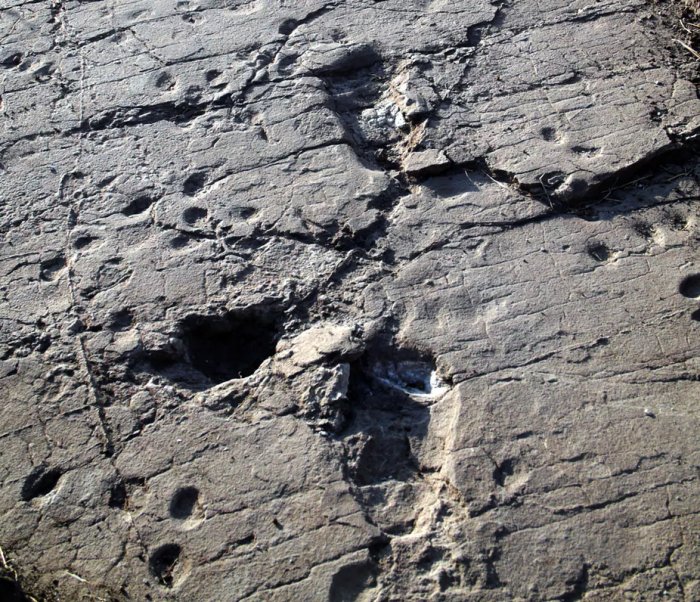 Taken together, the two groups of footprints testify to the presence of at least five bipedal early hominins moving as a group through the Laetoli landscape. Both the new and the older footprints have provided scientists with some clues in the search to understand human biological evolution.

Mysterious Ancient Ruins Of Engaruka – Why Was The Site Abandoned?

Tracing Footsteps Of Giants In Africa – Obscure Past Of Mzoura Stones

But while the science is crucial, it is also important to know what the people who live in and around Laetoli make of these ancient footprints. What do they think the footprints represent? My colleagues and I wanted to find out. So we interviewed local Maasai with whom we were working at the Laetoli and organised some focus group discussions with others within the area as well as nearby villages of Essere, Enduleni and Kakesiyo. There are about 35,000 residents in these villages and they have been living in the area for generations.

The Maasai people connect Laetoli footprints to the tale of Lakalanga, a strong hero who helped them win a battle against a neighbouring community. According to the story – which is consolidated into the local community oral tradition – Lakalanga was so big that wherever he walked, he left visible tracks on the ground. Although there is no time reference regarding the legendary Lakalanga, interviewed elders said the story is deeply rooted among the Maasai.

Since the legendary Lakalanga occupies a unique position among the Maasai community and because there is a myth linking him with the footprint makers, there is a need to incorporate these perceptions in the interpretation and preservation of footprints. This undertaking will reduce the chance of people harming the footprint site and increase the link between local people and their history.

Fossil bones and teeth can provide palaeontologists with a great deal of data about various aspects of human evolution. Footprints are potentially much more informative. Footprint sites can be interpreted as prehistoric snapshots of the deep past, having being formed in a relatively short time span.

In fact, after being impressed on the ground, these ephemeral traces of past life can fossilise only under extremely rare geological conditions. Using footprints, scientists can reconstruct locomotion, body size, speed, and variability of extinct creatures.

s and also to infer biological information. Nearly all the fossil human tracks discovered so far have been referred to species of the genus Homo. Laetoli is the only exception to the record. 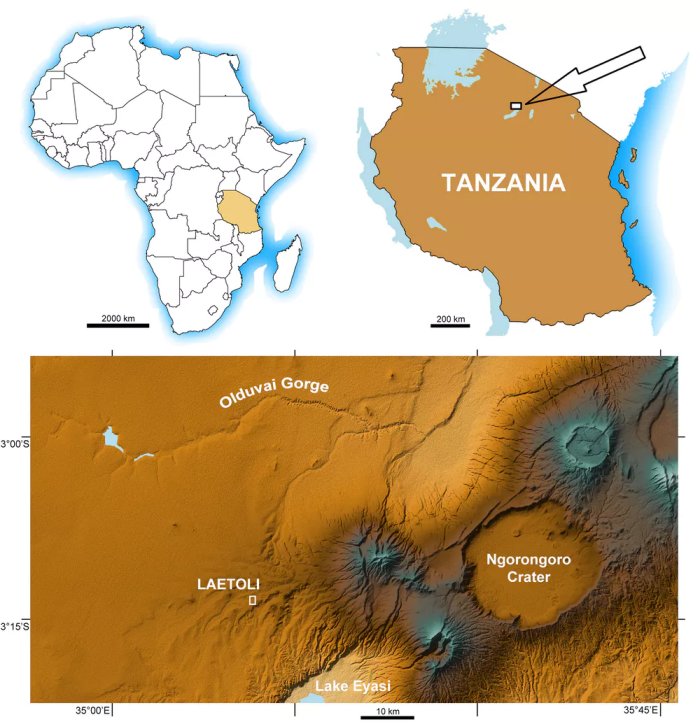 Laetoli is in northern Tanzania at the southern margins of the Serengeti Plains in the Ngorongoro Conservation Area. The area has several other world-famous palaeoanthropological localities: Olduvai Gorge, Lake Ndutu, and Nasera Rock.

From a scientific point of view, one of the most sensational results of the 2016 study that identified the second trackway at Laetoli concerns one track maker’s body size. One individual’s footprints are surprisingly larger than those of the other members of the group, suggesting an estimated stature of about 165cm, or about 5 feet 4 inches.

This exceptional body size, which falls within the range of modern Homo sapiens maximum values, makes it the largest Australopithecus afarensis individual identified so far.

The large body size aspect is also reflected in the local community’s interpretations of the Laetoli hominin footprints. 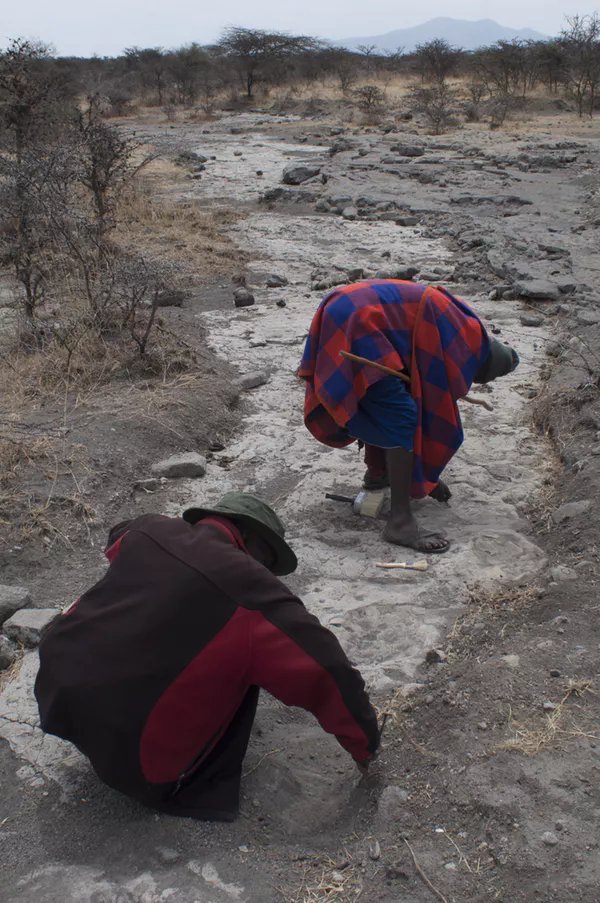 The Maasai we spoke to and hold discussions with knew about the footprints. They mainly knew about the animal footprints because they are scattered over various volcanic tuff on the Laetoli landscapes. The Maasai who live at Laetoli and on the outskirts visit and pass through the area regularly as they herd their livestock. The narratives about Lakalanga’s footprints have also become part of the folk lore of Maasai living further away.

It was during our discussions with the local community that we learned of the story of Lakalanga, his big strides and visible tracks. They believed that Lakalanga was energetic and bigger than any other member of the society.

The myths do not comply with a part of our scientific interpretation suggesting a social group of one large male, two or three female and one juvenile. The narratives do not interpret the footprints to belong to Lakalanga and his family. Instead, the narratives link the the footprints with Lakalanga and other Maasai worriors but who were not as large and energetic as him (Lakalanga).

Anansi The Spider: Trickster And Spirit Of Knowledge In African Mythology

The discovery in 2016 of the second set of footprints – and particularly the large footprints in that set – offered further confirmation to the Maasai that the hero warrior Lakalanga really existed.

Linking footprints with the story of Lakalanga is not unique at Laetoli. There are similar stories from other sites across the world where local people associate footprints with gods and heroes.

For example, in about 450BC, Herodotus reported that footprints found along the banks of Tyras River in Moldavia were associated with gods and heroes visualised as giants. Also, footprints from the Gallipoli Peninsula in north-eastern Turkey are linked with the great hero-athlete from the Trojan war.

This just goes to show that local people curious about footprints will always seek explanations on who made them. Hence local interpretations.