Ellen Lloyd - AncientPages.com - Thomas Jefferson once said – “The greatest service which can be rendered to any country is to add a useful plant to its culture,” and that’s exactly what Johnny Appleseed did through his work and dedication. 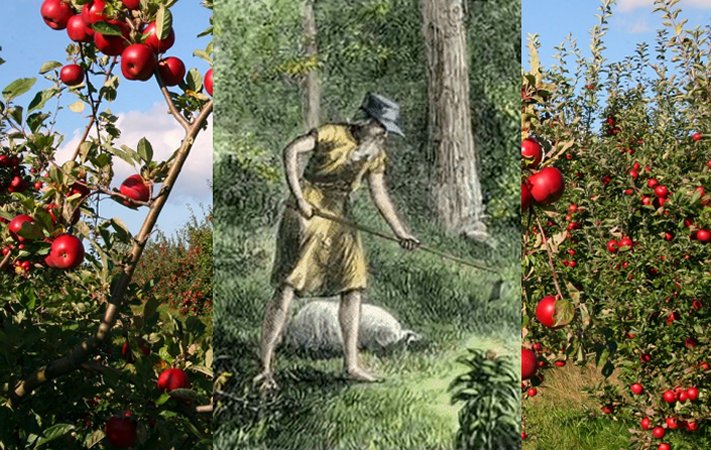 Image in the middle: John Chapman from the Harper's New Monthly Magazine, 1871

Nothing could stop Johnny Appleseed from wandering throughout the countryside planting apple seeds in the 1800's. His dream was to produce so many apples that no-one had to be hungry. This eccentric man, who was special in many ways is today remembered as a beloved American folk hero. He was the one who planted and supplied apple trees to much of the United States of America.

There are so many legends about Johnny Appleseed that it’s easy to forget who the real man was.

Johnny Appleseed, whose name was John Chapman from the beginning, was born in Leominster, Massachusetts in 1774.

John started to travel alone when his was in his twenties and that’s how he spent most of his life. He was America’s first organic orchard man and he was always welcomed by settlers and Native Americans, who treated him as a wandering shaman. He was well-known for his spirituality and pacifism, and he seemed to be as much at home with the red men of the forest as with his own race. John learned how to survive in the woods having very few tools and food. There are many legends about his unusual physical prowess, his toughness, his endurance.

Locals remember him as a person who could walk many miles on ice in winter, on bare feet. One day a man gave Johnny Appleseed shoes because it was so cold.  The next day, he was walking barefoot again. When asked what happened to his shoes, he replied he had given them to someone who as in greater need than him. 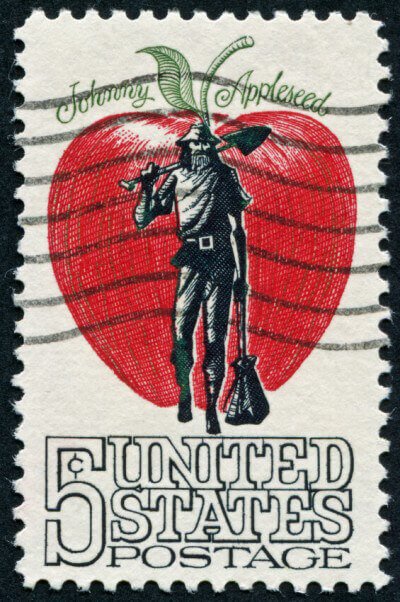 “He is reported to have lived one whole winter on “butternuts.” He is also said to have floated many miles down French Creek “on a cake of ice.” Paddling his canoe down the Allegheny River when there was much ice on the stream, he pulled his craft onto a block of ice, so the story goes, lay down inside the canoe, and went to sleep. When he woke up, he was a hundred miles below his intended destination.

La Malinche – Greatest Traitor Or A Victim Of Hideous Circumstances?

The image of him sleeping in the canoe on the floating ice suggests both his confidence and his lack of hurry or concern about reaching his destination. He was at home and at ease with his wandering, dreamy and certain of his destiny,” Robert Morgan writes in the book Lions of the West.

Even during the War of 1812, conflict fought between the United States, the United Kingdom, and their respective allies, John continued to wander across the country, carrying a leather bag filled with apple seeds. That’s how he got his nickname - the “apple seed man”. Later he became known as Johnny Appleseed. He often quoted Biblical scriptures and he said both his mission and his person were protected by God. He was also a devoted follower of Emanuel Swedenborg.

He visited several settlements and children, women and men loved him. To him it was more important that a settler planted an apple tree than pay him for it. His appearance gave the impression that he was a poor man, but it’s not true. He did earn money by selling his apple trees, but he often preferred to trade food or clothing rather than collect money for his trees. 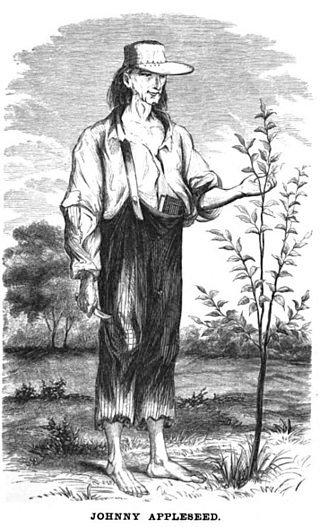 He lived among many Indian tribes and learned their languages He spent his time in nature and never killed any animals for survival. There was no need, he said because nature provided him with the necessary food. He was famous for his ascetic diet and it is said that he was only sick one time in his whole life.

Johnny Appleseed died of pneumonia at the age of seventy. Different dates are listed for his death, nut most likely he passed away in  March 1845.

He had spent more than 50 years walking across United States planting apple trees. This remarkable man introduced apple trees to large parts of Pennsylvania, Ontario, Ohio, Indiana, and Illinois, as well as the northern counties of present-day West Virginia. One can easily say that Johnny Appleseed had lived his dream.

Many movies and books have been produced in honor of this exceptional man. Children love to hear about his adventures and so do adults. He is an American legend and celebrated as a national hero.