A. Sutherland - AncientPages.com - The concept of humanoid robots has been known since ancient times. The first mention of this kind of mechanical devices can be found in the Chinese philosophical treatise Liezi, which was built in the third century BC.

The first-century human-like machine was designed by the Greek inventor Hero of Alexandria.

However, al-Jazari - a Muslim polymath: a scholar, inventor, mechanical engineer, craftsman, artist, and mathematician from Jazirat ibn Umar, who lived during the Islamic Golden Age, is considered to be the father of robotics.

The mechanical genius - Al-Jazari (1136-1206) - was the most famous mechanical engineer of his time, some 1000 years ago. He was as talented as famous Leonardo da Vinci, who also designed diverse machines and robots, but Al-Jazari lived 300 years earlier, i.e at the turn of the thirteenth century.
He is best known for writing the "Book of Knowledge of Ingenious Mechanical Devices" in 1206, where he described fifty mechanical devices along with instructions on how to construct them. 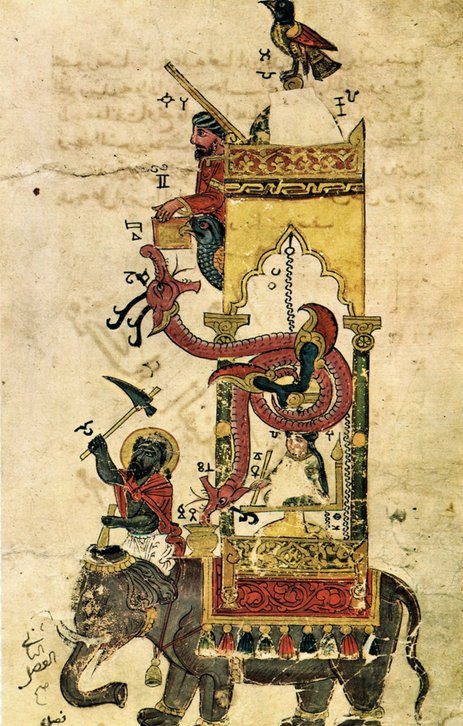 The Elephant Clock, leaf from The Book of Knowledge of Ingenious Mechanical Devices by al–Jazari.

Al-Jazari pioneered advances in robotics and is credited with inventing the camshaft, the crankshaft, and segmental gearing - present in almost every machine today.
Among one of the most famous inventions of this competent engineer and skilled craftsman is 'The Elephant Clock', in which an automaton reacted after certain intervals of time. The various elements that compose this clock move and make a sound every half hour. This device is reminiscent of the elaborate clocks found in medieval town halls in Europe, which made the passage of time more entertaining with the performance of the moving figures.

Gods And Their Advanced Technologies: Talos A Greek Robot Created By The God Of The Forge

Although none of the devices Al-Jazari's deviced survived to our times, they are, however, other examples of centuries-old robots that are still fully functional.
One of them is a mechanical monk - a prayer machine that never tires - who was made approximately in 1562, by the Spanish watchmaker Juanelo Turri (c. 1500 — 1585) on request of King Philip II of Spain.
This one of the most fascinating clockwork automatons ever made, a 15-inch high figure of a well-known miraculous monk, San Diego de Alcalá.

The circumstances of this robot are that the son of the King of Spain, Don Carlos, fell down a set of stairs in 1562 and fell into a deep illness due to his injuries. The King prayed to God, asking for his son to be spared with a miracle and promising a miracle in return.
In a few days, the boy began to heal and in the end, he was perfectly fine. The King then commissioned this monk as a celebration of prayer, piety, and faith.

The monk walks around, beating its chest, and lifting a cross and is still operational!

This automaton - probably one of the most miraculous things anyone had ever seen in the 16th century - is now in the collection of the Smithsonian Museum in Washington, DC. 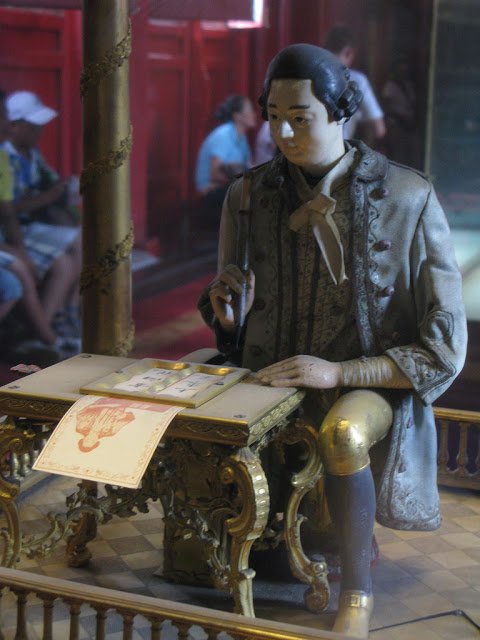 In the years 1768-1774, the Swiss watchmaker Pierre Jaquet Droz and his son Henri-Louis constructed three extremely complex androids (housed in the Musée d'Art et d'Histoire of Neuchâtel in Switzerland) that intrigue people even today.
The dolls are endowed with a different skills and they are: the Lady Musician, the Draftsman and the most impressive of them - the Writer, made of 6000 pieces is sitting and holding a quill (goose feather) that dips into the inkwell, and then he shakes it slightly before beginning to draw letters on paper with the pen. There is a special mechanism, allowing his eyes to follow his work. 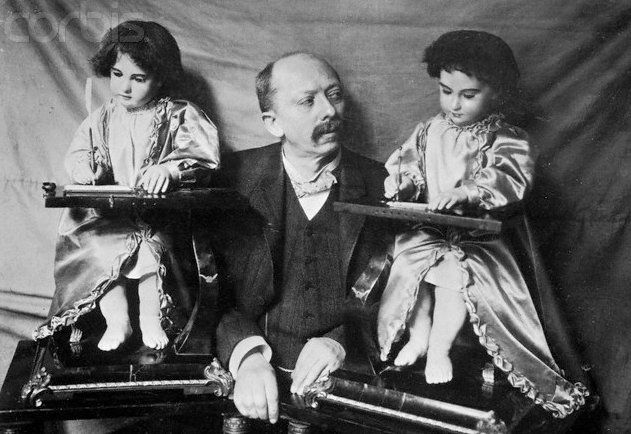 The Writer can write any text not exceeding 40 characters, spread over four lines. The main mechanism of the invention is the programming system disk (shown in the lower part of the image), which allows him to write text without external intervention. It is also possible to make him write any words, letter by letter.
The Writer might even be interrupted, stopping in the middle of the word, if asked, and wrote another.

The Cartoonist can draw four different drawings (portrait of Louis XV, the royal couple, dog, and Amora absorber chariot pulled by a butterfly), while the organist plays the organ.

The main mechanism of the Writer is the programming system disk, which allows him to write text without external intervention.

The word "Karakuri" means a mechanical device. At first, the dolls had not driven mechanisms. However, in the seventeenth century, the Spaniards brought a mechanical clock to Japan, and the Japanese began to install the clock's mechanism in Karakuri dolls.

From now on Karakuri androids could move and give out tea and confuse and surprise.

First version of this article was originally published on April 23, 2015