A. Sutherland - AncientPages.com - Pamola is a snow bird spirit in mythology of Abenaki (Penobscot), indigenous peoples in the northeastern United States and Eastern Canada.

In ancient beliefs of these people, Pamola (means: "he curses on the mountain") is said to be the god of Thunder and guardian of Mt Katahdin (“The Greatest Mountain”), the highest mountain in the U.S. state of Maine at 5,267 feet (1,605 m).

The bird-like creature lived on the summit of Katahdin and was responsible for cold weather.

The thunderbird is a large, avian creature widely known and worshiped among the indigenous people of North America. This legendary bird, most commonly found in folklore of Arizona in the southwestern United States, and a close relative to the Phoenix, could create storms. Numerous stories tell of a gigantic bird that creates the sound of thunder by beating its huge, strong wings.

Sheet lightning is said to be the bird blinking, and lightning bolts are made by glowing snakes which the bird carries around with it.

The thunderbird is often described as having horns, and even teeth within its beak.

Worshiped And Feared By Penobscot People

The Penobscot people have also their thunderbird. The creature is known as Pamola (also spelled Bemola or Pomola). It is described as having the body of a man, the head of a moose. In some legends, Pamola’s head is as large as four horses, and powerful wings and feet of an eagle.

In another oral tradition, Pamola was the storm-bird with powerful wings, a head as large as four horses, and with horrible beak and claws. The legendary bird was associated with snow, night, wind, and storms. It was definitely not a creature any human being would want to mess with. 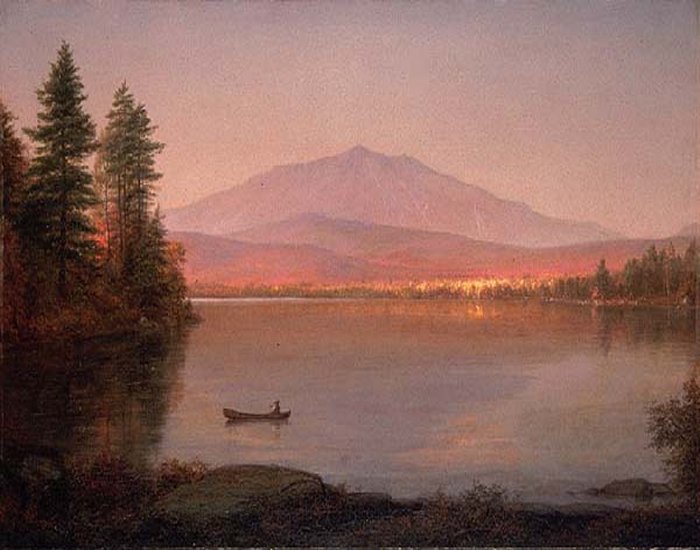 When people heard a noise like the whistling of a powerful wind they knew that Pamola was flying not far from them. The bird was both feared and respected by the Penobscot people. As Katahdin was the abode of Pamola, the Natives avoided climbing the mountain and considered this activity as taboo.

There was a belief that the spirit disliked mortals interfering from down below. As Henry David Thoreau (1817 - 1862), an American philosopher, essayist, poet and historian, who explored the Mt. Katahdin and the beliefs of the Penobscot Indians of Maine, wrote, "Pamola is always angry with those who climb to the summit of Katahdin..."

In Algonquian myth, the legendary bird Pamola, is an evil spirit eventually conquered by Glooskap, a trickster god and a mythic hero.

One story is about a man who went to the forests at the foot of the sacred Mt. Katahdin, and was caught in a heavy snowstorm. The only he could do was to appease Pamola; he burned offerings of oil and fat until the god of thunder himself appeared to take the offerings. Surprisingly, Pamola was not angry and thanked the man for his respect and generosity and took him to his sacred abode inside of Mt. Katahdin, where he lived in comfort with Pamola’s family. He even married Pamola’s daughter but on one condition: he was not allowed to marry anyone else, or else he would be taken prisoner inside of Mt. Katahdin for good. Unfortunately, the man didn’t heed the warning when he came back to his tribe. He disappeared and no one ever saw him again.

Another story tells about a woman who constantly persisted in refusing to believe even in the existence of Pamola, unless she witnessed him with her own eyes. One day, she was on the shores of the lake of Amboctictus, near Mt. Katahdin, on the south-west side. Pamola appeared and took the woman to his home inside of Mt. Katahdin. She stayed with him there for a year and was well treated, but powerful Pamola made her pregnant. Then she left his abode and returned to her home with Pamola’s son.

Pamola warned her not only to never re-marry, but also warned her of their son’s supernatural and frightening power. The child could point at any living thing with his right forefinger and it would die instantly.

He advised the woman to keep their son apart from society till the age of manhood, but her fellow villagers wanted her to remarry. She refused explaining that Pamola was her husband and in case of marriage, she and child would be taken back to Mt. Katahdin. No one took her words seriously and soon she was re-married, but in the evening of her marriage-day, when all the Indians from her village were gathered together celebrating the marriage, both she and the child vanished forever.

Vetromile E. The Abnakis and Their History