Ellen Lloyd - AncientPages.com - Female Pharaoh Twosret, one of the few women to rule Egypt was used and exploited. Those who had more power used her as a tool to satisfy their own agenda, but she was tougher than most and she fought back. 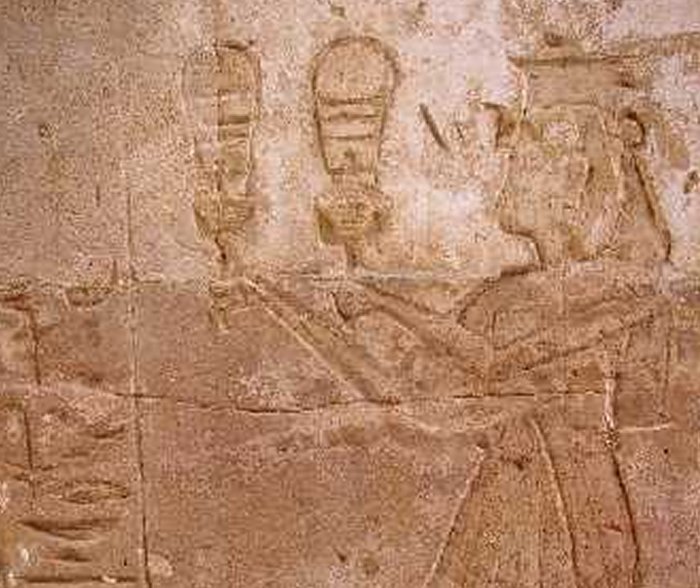 Pharaoh Twosret is not well-known, but her lifestory shows she succeeded against all odds. Later, after her death, her monuments were destroyed to remove the presence of a ruling queen from the hieroglyphic records. Those who tried to erase her from history almost succeeded.

It’s unknown who Twosret’s parents were, but she was most likely daughter of Pharaoh Ramses II who had many children. One can only imagine how life was for young Twosret who had many relatives in the harem of the Ramses the Great where his favorite wife, Nefertari was of special importance.

As a child, Twosret (Tawosret, Tausret) listened to how adults discussed the political and social situation in Egypt. Their mighty kingdom was surrounded by powerful enemies such as the Hittites, but they could not be compared to the horrifying Sea People who struck fear into the heart of an Egyptian. One can only speculate how much young Twosret understood of those conversations, but most likely, she heard about Pharaoh Merneptah’s military campaigns. Today, Pharaoh Merneptah has become famous for his extraordinary giant sarcophagus and unique Victory Stele and maybe young Twosret admired his achievements but we may never know.

During this period, ancient Egypt was constantly threatened, but when other powerful, neighboring kingdoms fell, the Land of the Pyramids managed to survive and prosper.

Twosret married Seti II, and became his second royal wife. The couple did not have any children. Some historians speculate tomb KV56 may represents the burial of their daughter, but this has not been confirmed.

When Seti II died, Twosret became first regent to his son Siptah together with Chancellor Bay. Pharaoh Siptah was only a 6-year-old child when he ascended the throne and he was very sick, being born disabled with a clubfoot. Twosret who was not his mother had to act as the boy’s regent. At the same time she was named God’s Wife of Amun at Thebes and had to move from the harem palaces of Pi-Ramesse in the North to Thebes in the South.

It seems this was the beginning of Chancellor Bay’s exploitation of Twosret. Chancellor Bay, also called Ramesse Khamenteru was an important official who rose to prominence and high office under Seti II.

As Kara Cooney writes in her book 'When Women Ruled the World', “all the evidence suggests that it was Bay who exercised real control of the country. Even if Tawosret was accepted as regent to Siptah by the Egyptians—since she did hold the title “The Great Noblewoman of Every Land,” which many historians believe is representative of queen regency during Dynasty it seems that Bay was nonetheless calling all the shots. Just as he had done with the short-lived elderly Seti II’s kingship, Bay made sure to visually and publicly mark Siptah’s kingship with his own presence.”

Twosret found herself in a difficult position. She was only about 20 years, still young and inexperienced. The Pharaoh Siptah was weak and dying. Chancellor Bay controlled every movement and decision. Eventually, Twosret managed to find new supporters to rally around her, and free herself from the dominating and power-hungry Bay.

Chancellor Bay was executed on Siptah's orders during the pharaoh’s fifth year as a ruler. An ancient inscription on an ostracon discovered in the ancient Egyptian village Deir El-Medina reads:

“Year 5 III Shemu the 27th. On this day, the scribe of the tomb Paser came announcing 'Pharaoh, life, prosperity, and health!, has killed the great enemy Bay'”

Even though Siptah is credited with killing Bay, it’s very likely Twosret played an important role in the pharaoh’s decision to get rid of the chancellor. Perhaps Twosret explained to the young pharaoh that both he and she were used by Bay to acquire more power.

When Siptah died, Twosret officially assumed the throne for herself and she was declared pharaoh, but ruling Egypt was far from easy.

Due to Maat, ancient Egyptians' most important religious concept, women used to have equal rights as men, but this was no longer the case.

Pharaoh Akhenaten and the Amarna period had left an everlasting mark on Egypt. Egyptians were skeptical towards a female pharaoh. The country needed a ruler, but Ramesside political system was not fond of females in power. Pharaoh Twosret had to struggle with many difficulties. The fact that even the great king list of Seti I at the Abydos Temple of Osiris removed the names of recent female kings, including Hatshepsut and Nefertiti shows the changed attitude towards female rulers. 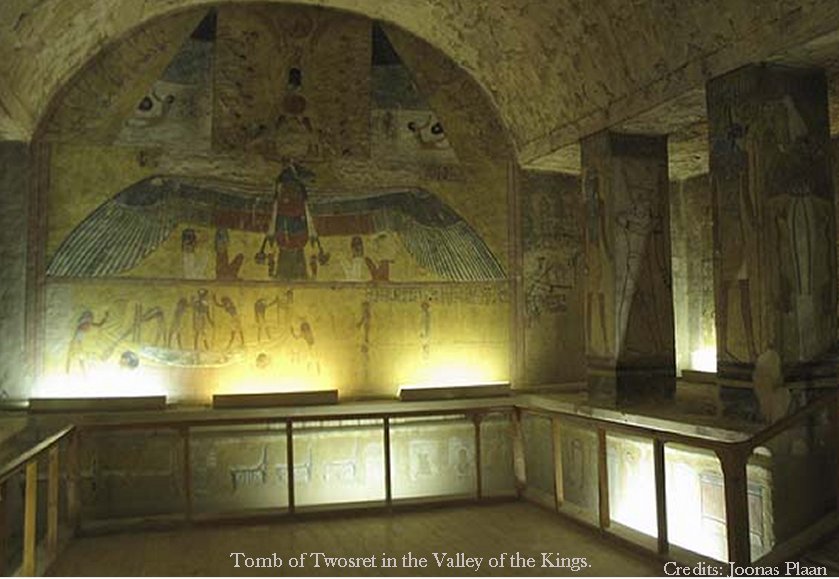 As Cooney explained, Pharaoh Twosret followed in the patterns of several female rulers.

"Like Merneith, she acted as regent for a king too young to rule. Like Neferusobek (Sobekneferu), she held the tattered remnants of a dynasty together, unable to pass any legacy on to a son because the absence of such a boy was the only reason she was in power in the first place. Also like Neferusobek, she ruled alone as king, without any male figure by her side. Like Hatshepsut, she was not the boy-king’s mother, on whose behalf she ruled, but one or more steps removed. Also like Hatshepsut, she became God’s Wife of Amun, and used her priestly power to vault herself into the kingship. It’s almost as if Tawosret were standing on the shoulders of a sisterhood, having learned from each of the female leaders who had come before her.”

Pharaoh Twosret's reign was short-lived and ended in civil war. It is unknown whether she was overthrown by her successor Setnakhte, or if she died peacefully. What is known is that Setnakhte’s hatred for her became soon evident. He ordered to open tomb KV 14 where Seti II and Twosret were buried. Then, Setnakhte said the body of Seti II must be moved to tomb KV 15 and additonally, he ordered to replace all images of Twosret with those of himself.  According to Cooney, “Siptah’s coffins, sarcophagi, and canopic chest were found by archaeologists smashed and washed into a crevice in the Valley of the Kings.” Whether those was a result of looting or deliberate destruction by Setnakhte is unknown.

All Pharaoh Twosret's monuments were destroyed and her name was removed from hieroglyphic records, as if she had never existed.

Pharaoh Twosret was unique because not only did she seize power by force, but also refused to share it with a male partner.