The fact that she was mentioned by Herodotus, Eratosthenes and Manetho, speaks in her favor as being non-fiction person, but is it enough? 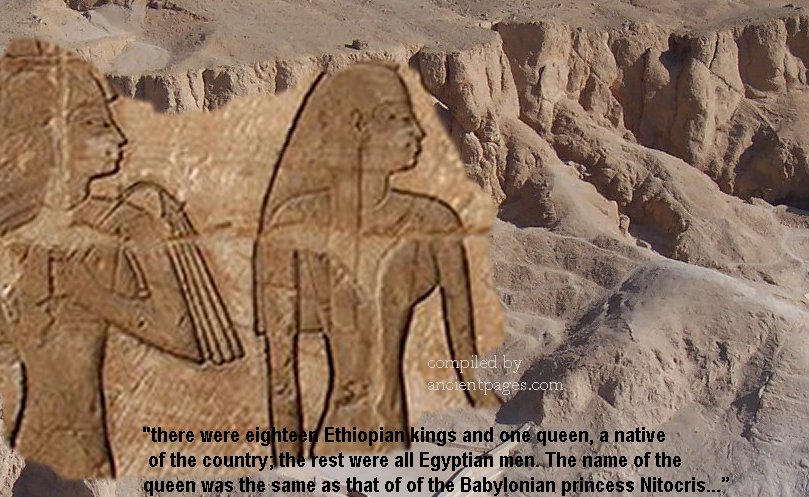 Manetho, an Egyptian high priest who lived in Sebennytos (in the Delta) during the Third Century B.C. and studied at the famous library of Alexandria described Queen Nitocris as the bravest and most beautiful woman of her time.

He credited her with the building of the Third Pyramid and stated she reigned for twelve years. Eratosthenes of Cyrene, (276 B.C. – 194 B.C.), a Greek mathematician, geographer, poet, astronomer wrote that her name means Athena the Vicotious and she was supposed to reign six years.

Herodotus (484 B.C. - 425/413 B.C.) who is widely regarded as the Father of History and famous for his work "Histories". He gives a colorful picture of Queen Nitocris’ life. He writes that "after Menes came 330 kings whose names the priests recited from a papyrus roll. In all these generations were eighteen Ethiopian kings and one queen, a native of the country; the rest were all Egyptian men. The name of the queen was the same as that of the Babylonian princess Nitocris..."

To avenge his death, she came up with a deceptive plan. Herodotus wrote that "she devised a cunning scheme by which she destroyed a vast number of Egyptians. She constructed a spacious underground chamber and, on pretense of inaugurating it, threw a banquet, inviting all those whom she knew to have been responsible for the murder of her brother. Suddenly as they were feasting, she let the river in upon them by means of a large, secret duct.”

Later, to escape vengeance, she committed suicide by running into a burning room. Our current knowledge of ancient history does not allow us to say whether there is any truth in the story of the queen’s life, but Herodotus was convinced she did exist.

He further wrote that “after Menes came 330 kings whose names the priests recited from a papyrus scroll. In all these generations were eighteen Ethiopian kings and one queen, a native of the country; the rest were all Egyptian men. The name of the queen was the same as that of of the Babylonian princess Nitocris.”

Historians have difficulties accepting queen Nitocris as a real person because she is not mentioned in any native Egyptian inscription. She was allegedly the last female pharaoh of her dynasty and rose to power circa 2148-2144 BC, but there are no records of her reign.

For some time, it was believed that she was mentioned in the Turin King List under the Egyptian name of Nitiqreti. Later scientists discovered this assumption was wrong.

Manetho stated she constructed the Third Pyramid, but we don’t know whether it was at Giza and there are many pyramids in Egypt. It could have been anyone of them. Archaeologists have not discovered her tomb, any monuments dedicated to her, statuary or texts. Without solid evidence, it is therefore impossible to prove Queen Nitocris was a historical person.

Modern historians disagree; some of them declare Nitocris to be a king and some other say that she is  a mythical figure.

Tyldesley - Chronicle of the Queens of Egypt